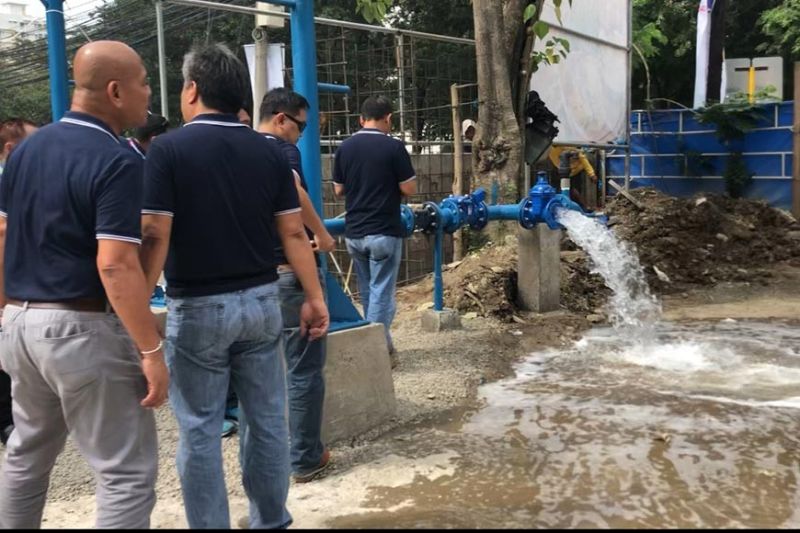 EIGHT IS ENOUGH. The Metropolitan Cebu Water District commissions a new well in Barangay Lahug, Cebu City to improve the water supply for consumers on Salinas Drive and parts of Barangays Lahug and Apas. But the move Monday failed to appease the Cebu City Government. Mayor Edgardo Labella terminated the services of all the members of MCWD’s board of directors Tuesday, Oct. 15, 2019, citing eight local government units’ dissatisfaction with their performance. (Contributed photo / MCWD PIO)

CEBU City Mayor Edgardo Labella terminated the services of the board of the Metropolitan Cebu Water District (MCWD), effective Oct. 15, 2019, for their failure to address the water crisis in Metro Cebu.

Except for Fernandez, all the others were appointed by Tomas Osmeña in 2016 or 2018 when he was still mayor. Fernandez was appointed before 2018 by then mayor but now vice mayor Michael Rama.

Under Presidential Decree 198 creating the local water districts, the board of directors, whose term varies from two years to six, can only be removed “for cause only.” On their initial terms, two directors have a maximum term of two years, another two for four years maximum, and one for one year maximum.

The MCWD board is appointed only by the mayor of Cebu City, although MCWD supplies water to Mandaue City, Consolacion, Liloan, Compostela in the north, Cordova in Mactan Island, and Talisay City in the south.

In removing the MCWD board, Labella cited PD 198 that gives the appointing authority the power to appoint and at the same time the power to remove or discipline.

“As Mayor of the City of Cebu, I am now exercising this power, subject to the review and approval of the Local Water Utilities Authority (LWUA) as per Section 11 of P.D. 198,” he said in his letter.

The termination of services was in effect Oct. 15, 2019, the day Labella signed the letters.

Labella has not named replacements yet.

LWUA acting Administrator Jeci Lapus, whose opinion was sought by Labella on Sept. 30, 2019, replied on Oct. 1 that he was not objecting to Labella’s plan to remove the incumbent MCWD directors “within the bounds of the law consistent with the last sentence of Section 11 of PD 198, as amended.”

The last sentence of Section 11 of PD 198 as amended states, “Directors may be removed for cause only.”

Labella had written MCWD officials and the board expressing his dismay over the water utility’s poor service. He warned them that unless they acted on the water shortage, he would remove them from office.

The legislative councils of the towns and cities served by MCWD have passed resolutions expressing similar positions against the utility firm for its negligence to address the water problem.

The MCWD board sets policies and directions of the utility firm, to include coming up with measures to improve the delivery of water services to its concessionaires.

MCWD is a government-owned and -controlled corporation (GOCC), and its officers and board of directors get an honorarium per meeting and bonuses.

In some GOCCs, the honorarium per meeting can be as much as P40,000 and the board meets not more than four times a month.

Concessionaires in MCWD’s service areas have been complaining about the absence of water in their tap for prolonged periods.

Water service interruptions have been running not just for hours but for days in many service areas.

Rain has not come enough to fill the weirs and wells of MCWD in Talisay City and Liloan, and saltwater has intruded into the groundwaters of its sources.

MCWD has not been able to address these issues fast enough to be able to continue supplying tap water to commercial and residential concessionaires at the usual volumes.

Labella, in his letter to the MCWD board, said it was with “a heavy heart” that he was terminating their services because of the “great dissatisfaction with its present service” that has been conveyed by its concessionaires in Cebu City.

The office of the MCWD board of directors received Labella’s letter at 2:34 p.m. Tuesday, Oct. 15.

Superbalita Cebu tried but failed to reach Yu and Sevilla by phone. Pe replied but said he would leave it to the board’s superiors to address Labella’s letter.

MCWD public information officer Charmaine Kara said the board might release a statement Wednesday. (MPS from PAC of SuperBalita Cebu)