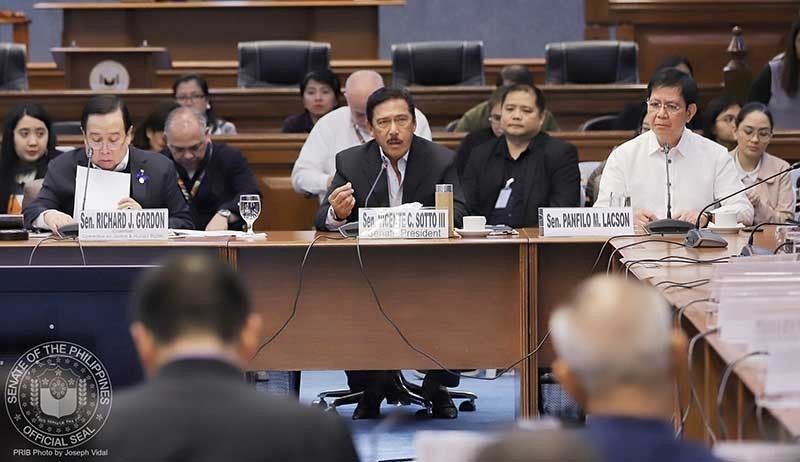 THE Senate Blue Ribbon committee is set to complete Wednesday night, October 16, its draft report on the recent investigation it conducted into the good conduct time allowance (GCTA) system and drug recycling.

Senator Richard Gordon, committee chairman, said the report will focus on the latest developments such as the "agaw bato" drug recycling scheme and corruption in the Philippine National Police.

"Agaw bato" is the name of a scheme wherein police officers seize illegal drugs and arrest the suspect. They would later release the suspect, but keep the drugs and sell these.

"We are working very hard to finish the Blue Ribbon Commitee Report, and plan to have a draft by tonight," Gordon said in a Twitter post.

In a series of Twitter posts, Gordon also said he spoke with Justice Secretary Menardo Guevarra and suggested that the 13 Pampanga police officers who arrested drug lord Johnson Lee in 2013 be brought to court to "perpetuate their testimonies".

The 13 alleged ninja cops, or police officers who sell the illegal drugs seized during operations, conducted the controversial November 2013 anti-drugs operation in Pampanga.

They were ordered dismissed after they were found to have under declared the volume of illegal drugs seized and presented another suspect instead of Johnson Lee, the first suspect they arrested.

Instead of the estimated 200 kilograms of methamphetamine hydrochloride (shabu) that witnesses said were seized during the operation, the 13 cops declared only about 36 kilograms.

The 13 cops also allegedly arrested Lee, but released him after he paid P50 million for his freedom.

The dismissal order against the 13 officers, however, was not implemented and the suspects were later demoted.

Albayalde, who was then the Pampanga police chief, was linked to drug recycling after Aquino, who was the Central Luzon police chief at the time, alleged that Albayalde had asked him to put on hold the implementation of the dismissal order.

Lacadin, who was the Criminal Investigation and Detection Group head at the time, said Albayalde hinted that he benefited from the illegal activities of his men.

Albayalde went on non-duty status, a privilege granted to retiring officers wherein they continue to report for work but is exempted from any task, on Monday, October 14, 2019. He is set to retire when he turns 56 on November 8, 2019.

Gordon said Albayalde may still be held liable even after he relinquished his post as PNP chief.