Fairfield by Marriott to open in 2020 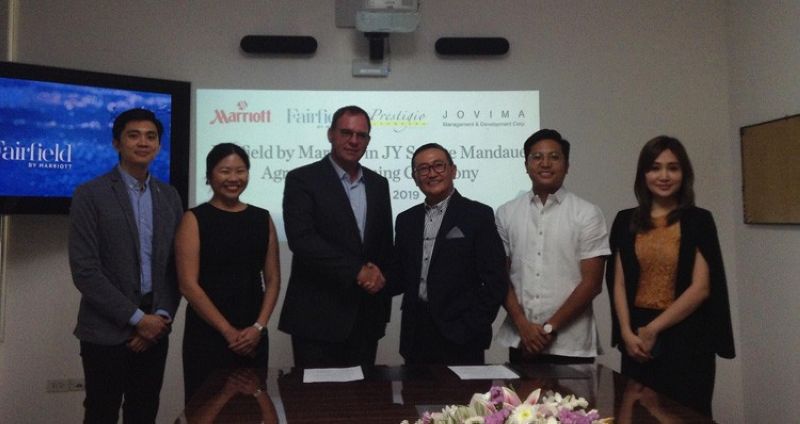 Peter Gassner (third from left) regional vice president for hotel development in Asia-Pacific at Marriott International, shake hands with Joseph Yu (third from right), chairman of the Jomiva Group, at the management deal signing for Fairfield by Marriott, which is set to open by mid next year in Mandaue City. (SunStar foto/ Carlo N. Lorenciana)

GLOBAL hotel chain Marriott International is set to make a comeback in Cebu next year.

Nearly two years after it exited its presence in Cebu hospitality industry, the American hotel group announced its partnership with Cebuano firm Prestigio Inc. to open the country’s first Fairfield by Marriott hotel in Mandaue City by the middle of next year.

Prestigio is the hospitality arm of the Yu family-owned Jovima Management and Development Corp. (JMDC).

“Prestigio’s partnership with Marriott marks a milestone in Jovima’s 31-year history,” said company vice president Joseph Michael Yu at the signing of the management contract Wednesday, Oct. 16, 2019. “This pays homage to our roots in the hospitality industry, having one of the first business hotels in the 80s.”

The Fairfield by Marriot hotel is expected to open at JY Square Mandaue on AC Cortes Avenue.

JMDC is the company behind JY Construction and JY Square, which has become a landmark in Cebu City.

Yu noted the company is optimistic on the tourism growth in Cebu, citing the potential of the business traveler market.

Peter Gassner, regional vice president for hotel development on Asia Pacific at Marriott, said the American hotel group is experiencing “an incredible growth” in the Philippines, noting that the project will be the first of the many Fairfield by Marriott hotels that will be opened in the country.

“We look forward to opening more hotels in the Philippines together with our trusted hotel owners, and being able to offer more choices and quality experiences to travelers,” Gassner said.

“We’re very excited to come back in Cebu,” he added.

The soon-to-rise nine-storey property will offer a total of 146 hotel rooms.

The 5,000-square meter JY Square Mandaue will also feature retail and office spaces, which will open earlier in the first quarter of 2020.

According to Gassner, Marriott’s comeback to Cebu firms up the need for the island tourist hub to have more international hotels, particularly in Mandaue area.

Gassner noted the rising competition in Cebu’s hospitality sector but he is confident it would continue to see good prospects, being the country’s second largest urban center.

To recall, Marriott exited the Cebu market when its management contract with Ayala for the Cebu City Marriott Hotel, now Seda Hotel, ended in 2017.