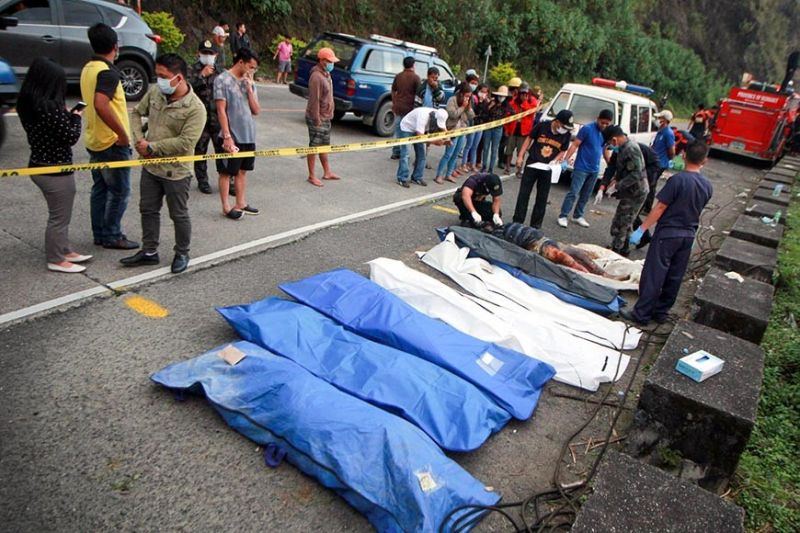 The cadavers, which have yet to be identified, were dumped in a more than 30-meter ravine from the national highway.

On Tuesday, October 15, a farmer from Ifugao who reported about his missing relative failed to identify and confirm one of the cadavers.

The Tuba police said that based on Soco's examination, the cadaver that was found first was believed to be dead for more two weeks. The body, belonging to a male person, was already bloated and in a state of decomposition. It was wearing a blue jeans, half naked, and has a blue and black leather bracelet with markings "DHL-31."

The second cadaver was also bloated and already in advance state of decomposition. It was believed to be dead for more than a month and was wearing two blue jeans and an Adidas sweatshirt.

The third cadaver was also bloated and in a state of decomposition, as it was believed to be dead for two weeks already. It has multiple puncture wounds on the chest and the face is unrecognizable. The person was wearing a black brief, brown pants, H&Y black and white shoes, and with no upper garments. He has a tribal tattoo on his left shoulder, guardians tattoo on the right shoulder, and GL tattoo on left hand.

The fourth one was approximately dead for more than a year, as only the skeleton was found along with a white K-Swiss rubber shoes, white T-shirt, white Walker brief, black jeans, red belt, and a pair of white socks.

The fifth cadaver, also a skeleton and approximately dead for more than one year, had a blue holster brief, blue jeans, blue jacket with hood, white Hudson undershirt, and three keys with black tag.

The sixth cadaver was also in a state of decomposition and had wounds on the neck and chest. The body was wearing a black jeans and green brief.

The seventh body retrieved was also bloated and in state of decomposition. The person was wearing blue striped sweatshirt and blue brief, had two silver rings on the middle and ring finger of the right hand, and a white T shirt.

The Soco said it will conduct DNA tests to identify the bodies.