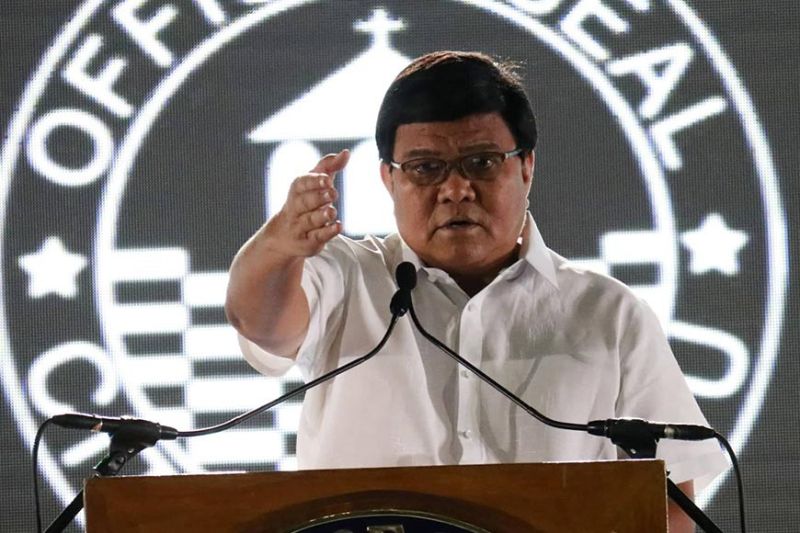 100 DAYS: Cebu City Mayor Edgardo Labella reports what he has done in his first 100 days in office. (Photo by Amper Campaña)

OVER two million jobs can be generated by the SM-Ayala consortium now that Cebu City Hall has granted it a land development permit for its project at the South Road Properties (SRP).

This is among the highlights of Mayor Edgardo Labella’s report on his first 100 days in office that he delivered Wednesday, Oct. 16, 2019, at the IC3 Convention Center in Mabolo, Cebu City.

“These past 100 days have heightened the attractiveness of SRP to economic input. In the wake of negotiations with locators, our administration has made evident its desire to strike a balance between supporting the business sector and implementing our regulatory laws,” said Labella in his speech.

In 2015, then mayor Michael Rama entered into a contract of sale with Filinvest Land Inc. (FLI) and the SM-Ayala Consortium, which former Cebu City mayor Tomas Osmeña said was illegal because it was not authorized by the 13th City Council.

On June 4, 2019, the City Council approved a resolution requesting the City Legal Office to file a petition for declaratory relief, which seeks to declare the sale of SRP lots in 2015 void.

When Labella became mayor in July, the council passed a resolution authorizing him to withdraw the petition.

Labella has created a special body to review the proposals of investors or prospective partners in joint ventures involving the City’s properties, especially in the SRP.

He said the committee is finalizing its strategic blueprint which integrates investor plans, assembling a smart, transport-accessible and ecologically sound urban core.

“As a result, the SRP is now at an advantage to draw good investment, create more jobs and optimize the City’s earnings,” he said.

Aside from the one by the SM-Ayala consortium, other developments at the SRP are the Cebu Ocean Park, and those by FLI and Universal Hotels and Resorts Inc.

When Cebu Ocean Park opened, Labella asked the management to hire the residents living in Cebu City, which got positive feedback as most of the employees of the oceanarium are from the city.

In his speech, Labella urged the Cebu City residents not to move to another place to work.

He said his administration is committed to providing jobs.

He said not only will the job-seekers be employed, they can also contribute to the development of the city.

Aside from this, Labella has also emphasized his goal for the environment with the creation of the Green Cebu City Stewards, composed of River Patrol, Coastal Patrol, and Forest Rangers, who ensure the “cleanliness and greening of the spaces” of the rivers, coastal areas and forests within the city.

The Stewards monitor the seedlings planted in line with the three million trees in three years project.

To date, at least 25,000 seedlings have been planted in the city.

In his speech, Labella also brought up his decision to end the services of the five members of the Board of Directors of Metropolitan Cebu Water District (MCWD) effective Oct. 15, 2019.

He also recalled his promise to the 80 barangay captains in Cebu City to grant P5 million to the barangay that can sustain cleanliness after the massive river clean-ups done.

He reported that building and business permits can now be processed within 24 hours.

It is because of this that the City has been able to strengthen its ties with the business community, which led the City, in partnership with the Cebu Chamber of Commerce and Industry (CCCI), to activate the Cebu Investment Concierge.

The Cebu Investment Concierge is a special body that will guide the investors to the “right business connections and its thriving markets” in Cebu City.

The traffic system in Cebu City will be upgraded to solve the traffic congestion happening in the city.

The first three floors of the Cebu City Medical Center (CCMC)--laboratory, radiology, imaging division and pharmacy--will be ready by the first quarter of 2020.

The City will set up two sets of nutrition centers in schools and barangays.

It will organize a nutrition summit as part of the City’s Nutrition Masterplan that will sustain its fight against malnutrition.

The City College will be temporarily located at Ramos Public Market until the mayor finalizes its permanent location, either at the SRP or in Barangay Lorega.

The City will build a high-rise sports training facility for athletes. The Philippine Sports Commission has allocated P50 million for this.

Police stations in Carbon and Pardo will be renovated.

Carbon Market has been cleared of road obstructions and cleaned, making it easier and faster for people to pass.

Along with the progress of the City, Labella said, he wants everyone to be with it. This led him to build medium-rise buildings within the city to provide a home for the homeless.

In September 2019, the first two five-storey medium-rise buildings in Barangay Lorega broke ground. It will house at least 200 residents.

“The scope of our City’s ambition should include the aspirations of ordinary citizens, striving to lift themselves out of poverty and to build good, dignified lives,” said Labella.

Labella assured the public he will continue what his administration has started.