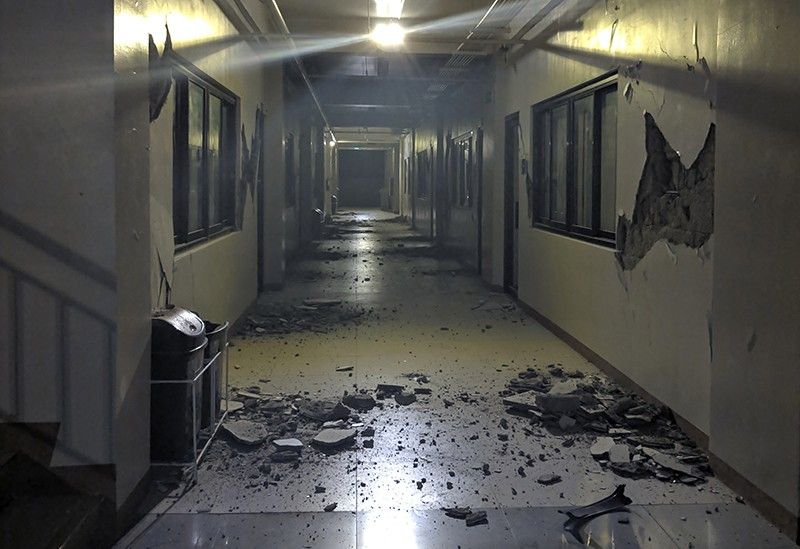 Debris is scattered on the floor of a damaged building in Digos, Davao del Sur province, southern Philippines on Wednesday Oct. 16, 2019. A powerful and shallow earthquake hit several southern Philippine provinces Wednesday night injuring some people in collapsed houses and prompting thousands to scramble out of homes, shopping malls and a hospital in panic, officials and news reports said. (AP Photo)

(UPDATED) Video clips posted on social media showed emergency responders in Magsaysay, Davao del Sur retrieving the bodies of a mother and child who were buried underneath mud and rubble in a landslide caused by a powerful and shallow earthquake in Mindanao Wednesday night.

This brought the death toll from the quake to four as of Thursday morning, October 17.

Authorities have yet to confirm these media reports. As of Thursday morning, local civil defense officials were still assessing the damage.

The quake also injured dozens in damaged houses, plunged a large part of Mindanao in darkness for several hours and prompted thousands to scramble out of homes, shopping malls and hospitals in panic.

Patients at the South Cotabato Provincial Hospital, SMMC Hospital in Tulunan and Kidapawan Doctors Hospital had to be evacuated.

The magnitude 6.3 tectonic earthquake occurred at a depth of only 8.0 kilometers and was centered near Tulunan town in Cotabato.

It strongly felt in several towns and cities across central and southern Mindanao, including President Rodrigo Duterte's hometown of Davao city, the Philippine Institute of Volcanology and Seismology (Phivolcs) reported.

Duterte was in the capital, Manila, when the quake struck at 7:37 p.m. Wednesday.

Classes on Thursday, October 17, were suspended in about 30 towns and cities to allow authorities to inspect the structural integrity of school buildings. Some local governments also suspended work Thursday.

The Task Force on Energy Resiliency of the Department of Energy reported that as of 10:35 p.m. Wednesday, their assessment showed that the earthquake had caused the 91-megawatt Mindanao Geothermal Power Plant 1 and 2 to trip.

Power was restored in Kidapawan City shortly after midnight, according to resident Marlon Denaque. His car’s dashcam captured the violent shaking of his car and a Mercury Drugstore outlet in Kidapawan.

The quake also “badly damaged” the Makilala Reservoir II, causing several areas in Makilala to experience low pressure to no water. The Metro Kidapawan Water District said the reservoir would have to be drained for further assessment.

In Tulunan, one of three areas that felt the earthquake at Intensity VII, Municipal Disaster Risk Reduction and Management Officer Ernie Diaz said their initial assessment as of 11:51 p.m. Wednesday was that 29 barangays were affected and 11 families reported damage to their houses.

The quake also affected nine structures, including a government building that was “severely damaged” it would have to be reconstructed.

Diaz’s report also noted cracks on the ground and landslides in Barangay Bacong.

In General Santos City, fire broke out in a shopping mall shortly after the quake hit, but it was unclear whether it was sparked by the temblor, officials said.

Vice Mayor Joselito Piñol of North Cotabato's M'lang town said patients were evacuated out of a hospital to ensure their safety during and after the quake, which injured three people by falling cinder blocks elsewhere.

Several buildings were damaged and some electric posts got toppled, Piñol said, adding that the shaking was so powerful the facade of his office crashed down with glass windows.

In the farming town of Magsaysay in Davao del Sur province, more than 20 villagers were injured by falling objects in their homes as the ground shook.

"Many houses were damaged, some totally. There were many aftershocks," town information officer Anthony Allada said.

Allada posted photos of the damaged Magsaysay Municipal Hall and other images of the quake on his social media account.

Several residents in the coastal town of Malita, the capital of Davao Occidental province, scrambled out of their houses to an elevated portion of the town, fearing a tsunami although no giant waves came, an official said.

One of the world's most disaster-prone countries, the Philippines has frequent earthquakes and volcanic activity because it lies on the so-called Pacific "Ring of Fire," a seismically active arc of volcanos and fault lines in the Pacific Basin. A magnitude 7.7 quake killed nearly 2,000 people and collapsed buildings and houses in the northern Philippines in 1990. (MVI/SunStar Philippines with AP)