'Running priest' calls for end to tree cutting in Naga 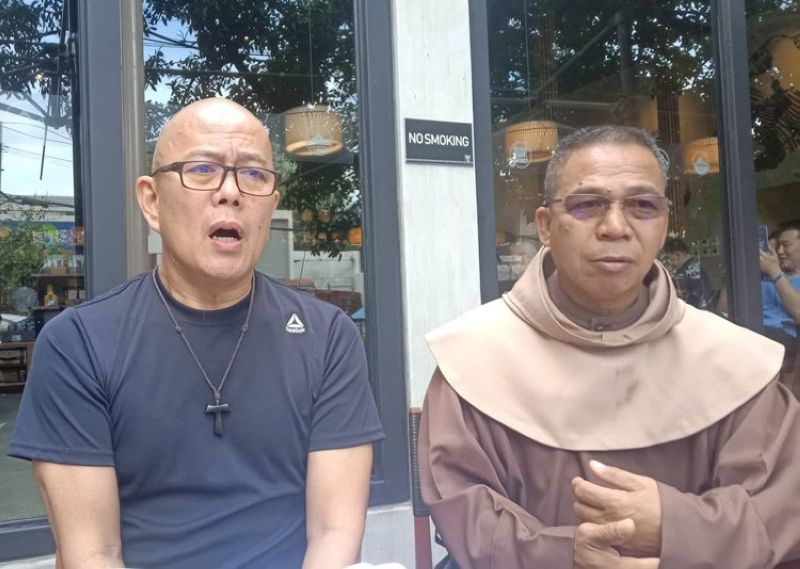 Fr. Robert Reyes (left) is in Cebu earlier today to join local environmentalists in their campaign to prevent the cutting of century-old trees growing along the national highway in the City of Naga. Along with Reyes is Bro. Simon Peter Jardinico, chairman of the Franciscan Solidarity Movement for Justice and Peace Integrity of Creation, one of the groups opposing the tree cutting in the City of Naga. (SunStar foto/Wenilyn B. Sabalo)

“STOP the ‘extrajudicial’ killing of trees in the City of Naga, Cebu.”

This was the appeal of 'Running Priest' and environmentalist Fr. Roberto Reyes, who is in Cebu today, October 17, 2019, to campaign for the stop of tree cutting in the City of Naga.

Reyes is set to run along the routes of Barangays Langtad, Inoburan and Tinaan in Naga where some 32 trees are scheduled to be trimmed and cut down within 90 days to pave the way for the government-initiated road clearing and widening projects.

“Let us wake up my dear kababayans, my dear Cebuanos. Your beautiful Cebu is dying. I will run and put white ribbons along these trees as a message that (if) you cut the trees, you cut your own life,” he said.

He also called on Cebu Archbishop Jose Palma to make concrete actions to stop the cutting of trees.

“I think you have to march to your munisipyos. But people will not march because they are afraid. That’s why this is the time for moral leaders to take the leadership. If Archbishop Palma will march and tell people to march, then people will march. Priests for trees,” he said.

SunStar Cebu has yet to get Palma's side on the matter.

“Let all the institution that have really the mandate to educate people, all the schools, Catholic schools, DepEd (Department of Education), basic environmental education,” he said.

In an interview last Tuesday, October 15, Department of Public Works and Highway (DPWH) Central Visayas Director Edgar Tabacon said he is willing to sit down with environmentalists to hear their concerns on the cutting of trees for road widening projects.

He invited all concerned environmentalists to sit down with them and join in the planning to discuss how they could meet halfway.

“We do not have the monopoly on ideas. It would be better if we sit down together so that we can talk and hear their suggestions also,” he said.

Reyes, on his part, said he is willing to sit down with government institutions and discuss on how they can meet halfway between development and environmental preservation as long as they do not have “pre-determined script.”

“Are you willing to stand on behalf of nature and environment? We will talk to you pero wala ng lokohan kasi all of these dialogues with public officials end up as an exercise of a waste of time,” Reyes added. (SunStar Cebu)