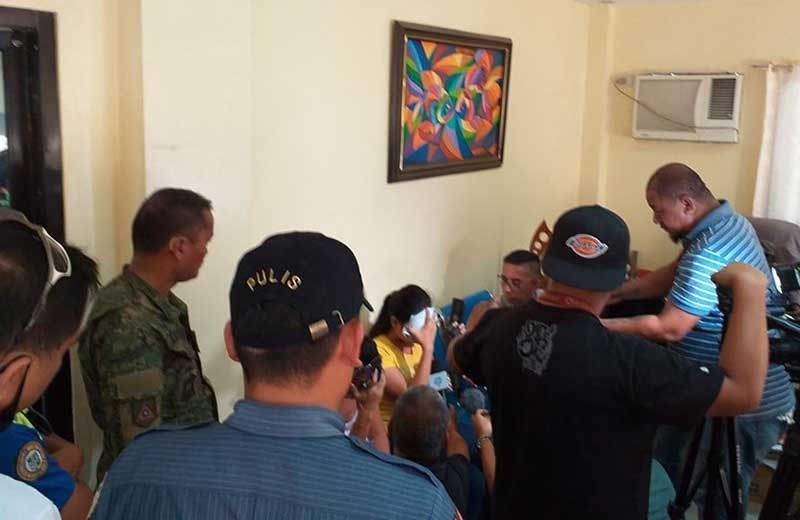 DAVAO. A mother and daughter suspected of spreading fake news about a tsunami are apprehended in Toril, Davao City on October 17, 2019. (Photo by Kagawad Ryan Maboloc via SunStar Davao)

OFFICIALS of Davao and Digos cities are struggling to quell panic over fake news about a tsunami and another powerful earthquake that have continued to circulate in social media following the magnitude 6.3 tremor that struck parts of Mindanao on October 16.

In separate posts on social media, officials sought to assuage fears and assured that the reports about a tsunami or a major earthquake happening at a certain time are not true since these disasters could not be predicted.

In Davao City, authorities apprehended a mother and daughter who allegedly circulated fake news of a tsunami alert on Wednesday night, October 16, which caused panic among residents.

The two were brought to the barangay hall in Daliao in Toril, Davao City.

The Davao City Disaster Risk Reduction and Management Council, in a post on Thursday afternoon, October 17, assured that the seas were calm.

In Digos City, Davao del Sur, officials reiterated that rumors about a tsunami and a magnitude 8.1 earthquake are false.

There is no need to panic. There is no reason to worry. The report about a tsunami is not true. It's fake news, the City Government said in a Facebook post.

Posted by City Government of Digos on Thursday, October 17, 2019

It states that "any person who gives false or misleading data or information or willfully or through gross negligence, conceals or falsifies a material fact, in any investigation, inquiry, study, or other proceeding held pursuant to this Act, shall be punished with imprisonment of not less than two (2) months but not more than six (6) months, and with a fine of not less than One thousand pesos (P1,000.00) but not more than Ten thousand pesos (P10,000.00): Provided, however, That if the false or misleading data or information shall have been under oath, the maximum penalty for giving false testimony or perjury shall be imposed."

A bill seeking to penalize creation and spreading of false information is also pending in Congress.

Shortly after the quake struck, the City Governments of Davao and Digos immediately sought to correct reports about a tsunami and appealed for calm.

A powerful and shallow earthquake, with magnitude of 6.3, struck southeast of Tulunan town in Cotabato at 7:37 p.m. on October 16. It was felt at Intensity VII in Tulunan, M'lang and Kidapawan City.

It was also felt strongly in several other areas in central and southern Mindanao, including Davao and General Santos cities. As of Thursday, authorities were validating reports that four people have been killed and scores were injured.

The National Disaster Risk Reduction and Management Council, in a situation report as of 6 a.m. Thursday, confirmed two fatalities in Magsaysay town in Davao del Sur and 27 injured persons in Davao and Soccsksargen regions.

Video clips of emergency responders retrieving the bodies of a mother and child buried in a landslide caused by the earthquake have been posted on social media.

The NDRRMC report also noted that 15 structures in Davao and 14 in Soccsksargen sustained damage from the quake. The fire that hit Gaisano mall in General Santos City was listed as quake-related. (MVI/SunStar Philippines with SunStar Davao)
< Previous PageNext Page >