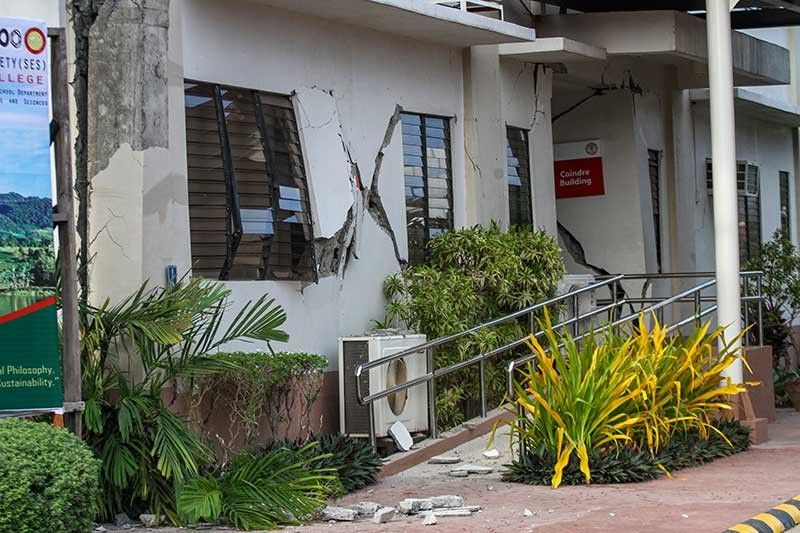 DAVAO. Damaged walls are seen on a building a day after a strong quake struck in Digos, Davao del Sur province Thursday, Oct. 17, 2019. A powerful and shallow earthquake hit several southern Philippine provinces Wednesday night injuring some people in collapsed houses and prompting thousands to scramble out of homes, shopping malls and a hospital in panic, officials and news reports said. (AP Photo)

MALACAÑANG on Thursday, October 17, echoed calls of local government officials for calm amid rumors circulating about a tsunami and another powerful earthquake that will hit Mindanao.

Presidential Spokesperson Salvador Panelo urged the public to stop spreading information that would cause panic among residents of areas affected by the magnitude 6.3 earthquake on October 16, 2019.

"We ask the public to remain calm but vigilant and we urge them to refrain from spreading disinformation that may cause undue alarm, panic and stress to many people," Panelo said in a statement issued Thursday.

He assured that the Office of the President has already tasked all concerned agencies of the government to mobilize, respond and provide immediate assistance to those in need, as well as to study plans on how to rehabilitate the damaged areas.

The magnitude 6.3 quake, which was tectonic in origin, struck southeast of Tulunan town in Cotabato at 7:37 p.m. Wednesday, October 16, 2019.

It occurred at a shallow depth of 8.0 kilometers, causing damage to houses, buildings and infastructure. Shallow quakes are more destructive.

It was felt at Intensity VII in Tulunan, M'lang and Kidapawan City in Cotabato. It was also felt strongly in other areas in central and southern Mindanao, including Davao, General Santos and Cagayan de Oro cities.

Panelo said the government, through the Philippine Institute of Volcanology and Seismology (Phivolcs), is closely monitoring the situation.

"The Palace is saddened by this unfortunate incident and, in the meantime, wishes to express its sympathies to those who were affected thereby," he added.

The National Disaster Risk Reduction and Management Council, in a situation report as of 6 a.m. Thursday, confirmed two fatalities in Magsaysay town in Davao del Sur and 27 injured persons in Davao and Soccsksargen regions.

It also reported that 15 structures in Davao and 14 in Soccsksargen sustained damage from the quake. The fire that hit Gaisano mall in General Santos City was listed as quake-related. (MVI/SunStar Philippines)