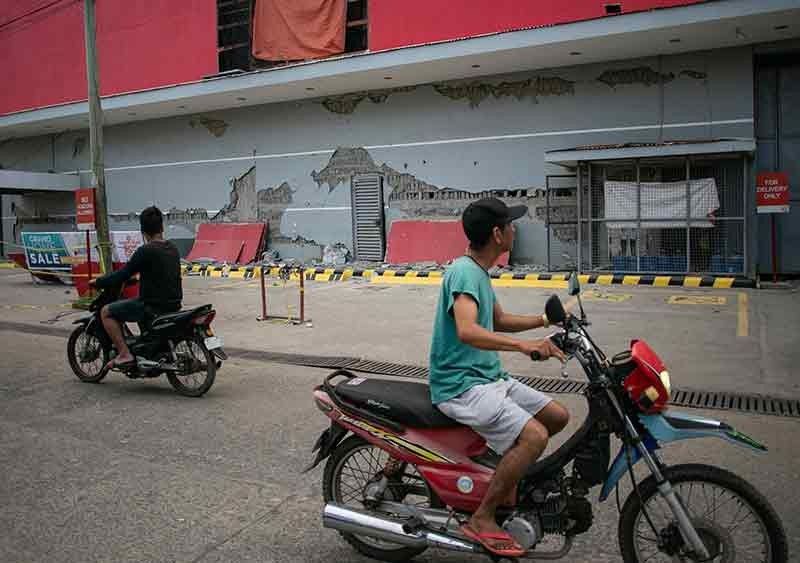 DAVAO. Men look at the damage on a building a day after a strong quake struck in Digos, Davao del Sur province, Thursday, October 17, 2019. (AP)

THE death toll in the 6.3-magnitude earthquake that rattled Mindanao, particularly Davao Region, on Wednesday, October 16, rose to three while over 20 people were injured and several structures, including the municipal halls in Davao del Sur, were damaged.

Office of Civil Defense (OCD)-Davao information officer Leslie Francisco said in a situation report Thursday morning, October 17, that the Regional Disaster Risk Reduction and Management Council (RDRRMC) Operation Center has been closely monitoring its area of responsibility for any reported damage and casualties in coordination with the local DRMMC.

"As of this report, we have monitored through Facebook pages and Messenger of reported damage and casualties in Magsaysay and Digos City, Davao del Sur, and Malita, Davao Occidental but no official sitrep (situational report) received from the concerned Local DRRMCs," the report said.

Twenty-one people sustained injuries in Magsaysay, Davao del Sur and were rushed to Digos City Provincial Hospital. All the injured are still subject for verification and validation from the Provincial and Municipal Disaster Risk Reduction and Management Council.

The OCD-Davao also reported around 10 damaged houses in Barangay Poblacion and Barangay San Isidro, while another one in Malita, Davao del Sur was destroyed. The damaged houses are still subject for validation. The affected families are temporarily staying in their neighbors' houses in safer areas.

There were power interruption reported in Davao del Sur and as of 10 a.m. Thursday, October 17, as per the Department of Energy (DOE) updated report, Mindanao's power situation is already back to normal.

The OCD-RDRRMC said it is closely monitoring the damaged buildings in Davao del Sur and Davao City. Continuous coordination with RDRRMC member agencies has been taken for immediately response to the affected local government units.

Bansalan Municipality issued a suspension of work in all municipal offices except MHO and MDRRMO.

The Bansalan MDRRMO has also activated its Camp Management and Camp Coordination to check the affected areas.