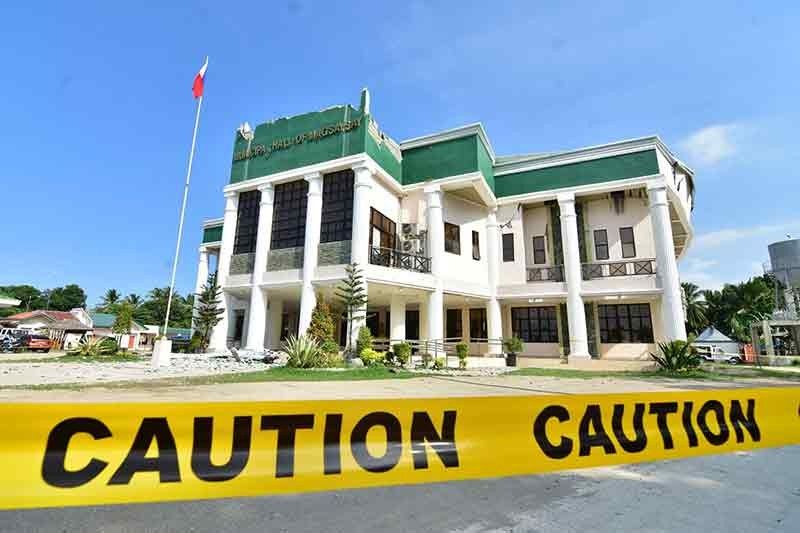 DAVAO. The Municipal Hall of Magsaysay was damaged by the 6.3-magnitude earthquake that hit North Cotabato and affected nearby provinces Wednesday, October 16, 2019. (Photo courtesy of Kagawad Ryan Maboloc)

TWO individuals responsible for spreading false information about a tsunami have been apprehended and will face legal consequences after their post caused panic among those living in coastal areas.

One of the perpetrators, accompanied by her mother, was presented Thursday, October 17, in Barangay Daliao, Toril, Davao City. She goes by the name Bryce on Facebook and is a senior high school student. She was apprehended after she posted false information telling the people to evacuate by 3 p.m., especially those near the shoreline, because of the possibility of another earthquake, which is stronger than the 6.3-magnitude tremor that rattled Mindanao Wednesday, October 16.

The Davao City Disaster Risk Reduction Management Office (CDDRMO) clarified that there is no certain technology yet that can predict when an earthquake will occur.

CDDRMO operations officer Rodrigo Bustillo, in a phone interview, said he reprimanded Bryce for spreading the fake news that confused and caused panic among Dabawenyos.

On Wednesday night, October 16, a 6.3-magnitude earthquake rocked North Cotabato. It was felt by neighboring areas.

According to the Philippine Institute of Volcanology and Seismology's (Phivolcs) Earthquake Information 3, those in Davao City felt the quake at an intensity five.

Following the earthquake, information spread online and through text messages that the waters at the coastlines of the city has receded with the possibility of a tsunami.

On its Facebook page, the CDRRMO said there is nothing to worry about as there is no tsunami.

Should there be a tsunami, the citywide siren will alarm to caution the public, it added.

The CDRRMO reminded the public of the possible consequences for spreading fake news.

Bustillo, in a separate interview on Thursday, October 17, said based on their physical monitoring on the coastal areas in the city, they did not notice any manifestation of a tsunami occurrence.

"Wala ta naghatag og tsunami alert kagabii tungod wala may tsunami. We have monitoring sa coastal area wherein makita didto situation tungod naa camera naka-set-up didtoa (We did not issue a tsunami alert because there was no indication of a possible tsunami. We have monitoring cameras set-up in these areas to look into the situation)," Bustillo said during the iSpeak media forum at the City Hall of Davao.

He said the initiative of the residents to immediately evacuate was "highly appreciative" because they are now alert in times of disaster. But he said the public should have awaited for the advisory from the CDDRMO.

"Ayaw mo pag move without advisory gikan sa among opisina (Do not evacuate unless we issue an advisory from our office). We, in the CDDRMO, use information-based technology and customize ways to gather information para makahatag ta og (so we could give) early warning sa mga tao (to the people). We have the authority to see these things to ensure na safety ang Davao (Davao is safe)," Bustillo said.

Meanwhile, he said criminal charges will be filed against individual or certain social media pages who "irresponsibly" shared invalidated reports.

Under Article 154 of the Revised Penal Code, "Any person who by means of printing, lithography, or any other means of publication, shall publish or cause to be published as news, any false news which may endanger the public order, or cause damage to the interest or credit of the State," may be penalized by imprisonment of arresto mayor (one month and one day to six months) and a fine ranging from P40,000 to P200,000 (as amended by RA 10951).

"Publication" need not be by print media, but may be oral.

Bustillo added that the apprehension of the two minors will serve as a lesson to netizens who are not responsible of what they post and share on the internet.

Bustillo also said barangay officials have also the responsibility to "calm down" the situation in case the mentioned incident occurred.

For her part, Office of Civil Defense (OCD)-Davao information officer Leslie Francisco also reminded the public to only believe in reports of legitimate sources and concerned agencies to avoid miscommunication and confusion.