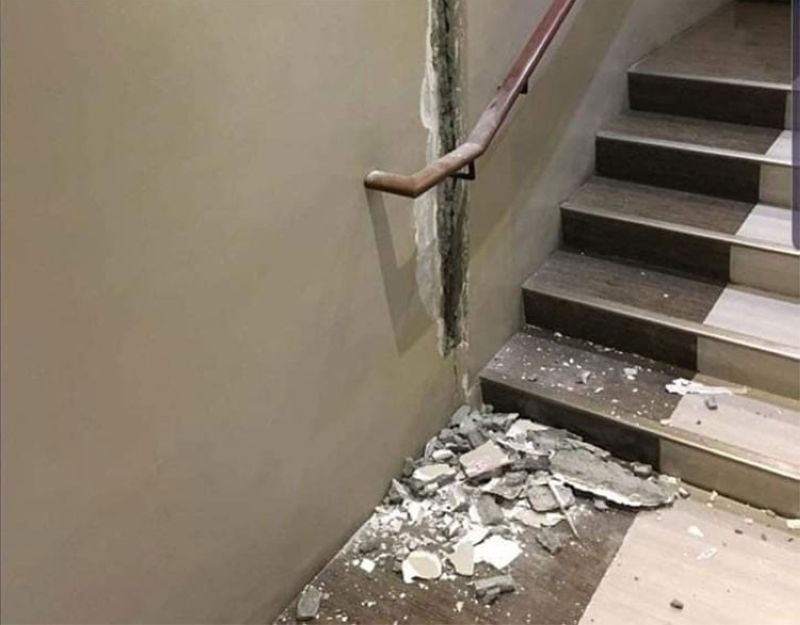 CAGAYAN DE ORO. The third floor of the Limketkai Luxe hotel's Tower 2 was temporary closed as the management checks on the cracks found after the 6.3-magnitude earthquake that shook Mindanao on October 16, 2019. (SunStar Cagayan de Oro)

SMALL cracks were seen at a bridge and a hotel while people inside malls and other buildings were escorted out after an intensity III earthquake was felt in Cagayan de Oro City, Wednesday night, October 16.

City engineer Rolando Pacuribot said a small crack was seen at the JR Borja Bridge while a wall of Limketkai Luxe Hotel was slightly damaged.

But, Pacuribot said the bridge is safe for use as the crack at the bridge’s construction joint is not a cause for alarm.

He said during disasters such as earthquakes, the construction joint is usually the part of the bridge that gets affected and cracks.

The bridge joint, also known as expansion joint or movement joint, is an assembly designed to hold parts together while safely absorbing temperature-induced expansion and contraction of building materials, and vibration, or to allow movement due to ground settlement or seismic activity.

On the other hand, the whole structure of the hotel is stable as only the column of the wall was damaged.

In a statement, the management said the Tower 2 3rd floor area is temporary closed on Thursday, as the hotel’s engineering team is conducting a composite check and validation on the specific area where wall cracks were found. The Tower 1 where the lobby, function rooms, outlets and guest rooms are located is on regular business operation.

The management added updates will be released as soon as the team is done with the over-all evaluation.

The City Engineer’s Office, City Disaster Risk Reduction and Management Department, and the Office of the Building Official continue to conduct inspection in buildings, especially in schools to ensure they are all safe and stable.

Meanwhile, the Provincial Engineering Office and the Provincial Disaster Risk Reduction and Managemet Office also said no damages was reported in the province due to the tremor.

A magnitude 6.3 tectonic earthquake jolted parts of Mindanao at a depth of only 8.0 kilometers and was centered near Tulunan in Cotabato.