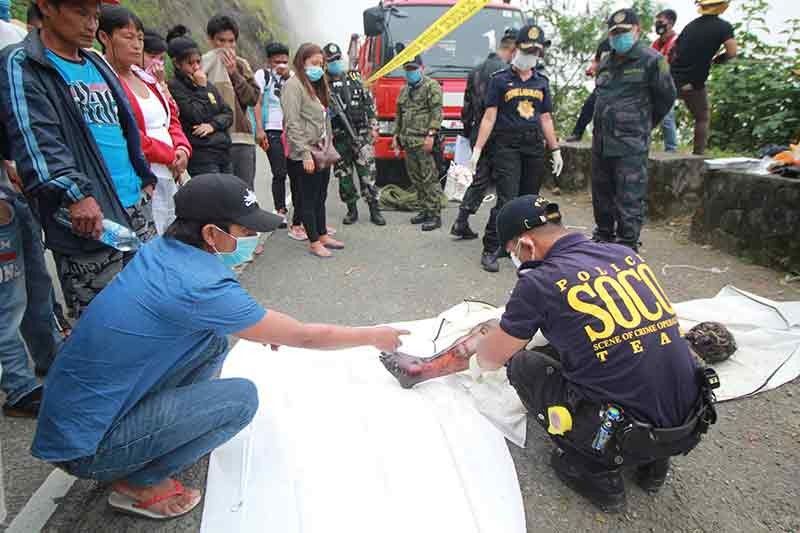 CAMP BADO, Dangwa -- A task force was activated to investigate on the eight bodies dumped along Marcos Highway in Sitio Poyopoy, Barangay Taloy Sur, in Tuba, Benguet, which is a big slap on the face of peace-loving people of Benguet, police said on Thursday, October 17.

This was manifested by Benguet Provincial Police officer–in–charge Colonel Elmer Ragay following the discovery of six decomposing bodies and two human skeletons on October 15 and 16.

“Even the LGUs of Benguet are having queries about this. The people of Benguet are peace loving but it’s about time we do something about this. It is high time for all to act on the matter, activate force multipliers in the area,” he said.

To look deeper and investigate the facts surrounding the incident, “Task Force Found Cadavers” was activated and will be spearheaded by Ragay, provincial crime lab, provincial criminal investigation and detection group and provincial legal officer.

He added the third cadaver that was retrieved was identified by his brother and father as Fahad Manan Macalanggan, 28, native of Marawi and resident of Pinewood Crystal Cave in Baguio City.

The victim was identified through his tattoos at the right side arm, left arm, black briefs and brown pants confirmed by his brother as his gifts to the victim.

The eighth cadaver was identified by his mother as Kent Charlie Licyayo, 22, unemployed, a native of Hingyon, Ifugao and resident of Hilltop, Baguio City.

Ragay added they cannot ascertain the cause of death of Macalanggan because of their customs where the body cannot be subjected to autopsy.

Licyayo, based on initial autopsy, died of traumatic injuries in the chest.

According to Scene of the Crime Operatives initial findings, the five cadavers have been dead for at least two weeks while another is believed to be dead for almost a month, and the two skeletal remains were found to be a year old.

“They died in different times but dumped in the same place,” added the police officer.

With many speculations on the discovery of the dead bodies, Ragay shed light that Benguet has been adjudged as the best provincial police office for the past three years and it is impossible that police personnel will be involved.

DNA samples were taken from the bodies and the Benguet Provincial Police Office had reached out to all PPOs and nearby provinces to relay any information on reported missing persons in their areas of responsibility which can help in the speedy identification of the cadavers.