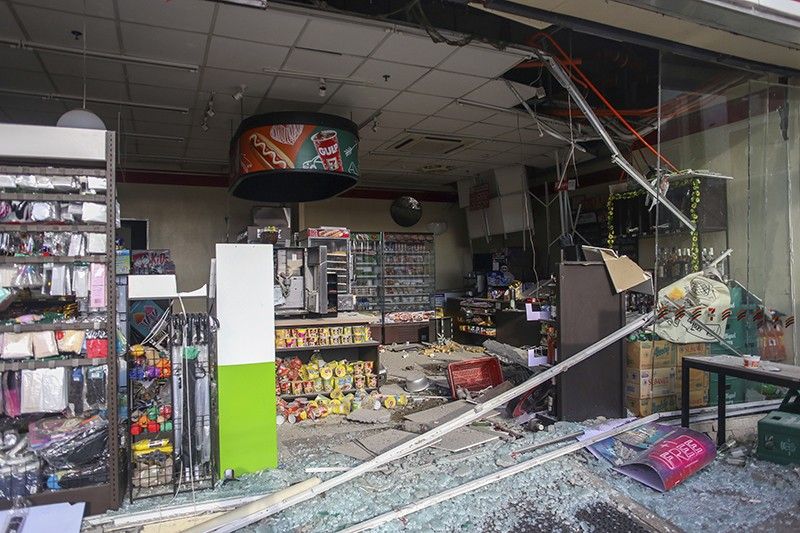 Debris are scattered on the floor of a damaged store a day after a strong quake struck in Digos, Davao del Sur province, southern Philippines Thursday, Oct. 17, 2019. A powerful and shallow earthquake hit several southern Philippine provinces Wednesday night injuring some people in collapsed houses and prompting thousands to scramble out of homes, shopping malls and a hospital in panic, officials and news reports said. (AP Photo)

THE National Disaster Risk Reduction and Management Council (NDRRMC) said five persons were killed, 89 injured and 144 structures damaged when a powerful and shallow earthquake struck near Cotabato and affected a large part of Mindanao.

As of 8 a.m. Friday, October 18, 2019, the NDRRMC said 3,068 individuals or 613 families were evacuated after the quake. Most of them have returned to their homes while some in Davao region are staying with relatives.

Around 500 aftershocks have occurred, including 223 that were plotted and eight that were felt, since the magnitude 6.3 quake struck at 7:37 p.m. on October 16, 2019 at a shallow depth of only 8.0 kilometers southeast of Tulunan town in North Cotabato.

The NDRRMC report said three fatalities were reported in Magsaysay town in Davao del Sur, one in M’lang town in Cotabato, and one in Maguindanao.

There were 21 injured persons in Magsaysay, 32 in Cotabato province, 29 in South Cotabato, and 7 in General Santos City.

A total 144 structures were damaged in Davao and Soccsksargen regions as well as in the Bangsamoro Autonomous Region in Muslim Mindanao (BARMM).

Major damage to buildings and infrastructure were reported in the cities of Cotabato, Kidapawan and Koronadal.

Seven hospitals and other health facilities in Cotabato province also reported cracks on their walls.

A public shrine in Lampagang in Tulunan, which was closest to the quake’s epicenter, needs to be reconstructed.

The Upper Silway Bridge that links Digos to Makar Road also sustained damage and is passable only for light vehicles. (MVI/SunStar Philippines)