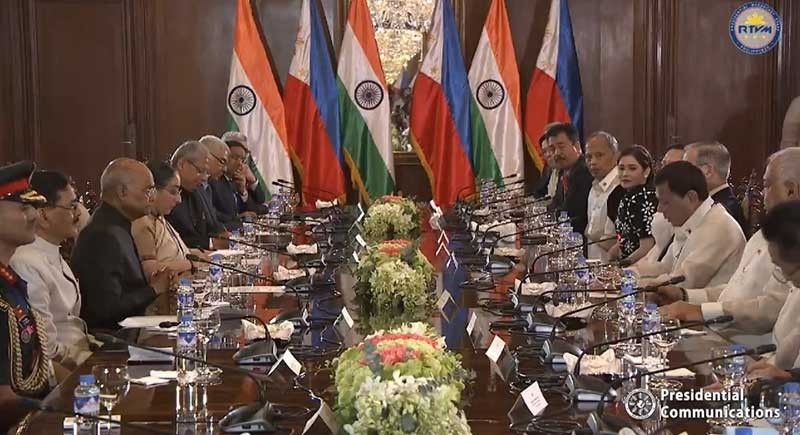 MANILA. Philippines and India officials hold a bilateral meeting at the Malacañang on October 18, 2019. (Photo grabbed from Presidential video)

AT LEAST four agreements were signed between the Philippines and India on Friday, October 18, during the five-day state visit of Indian President Ram Nath Kovind to Manila.

The agreements were signed after the bilateral meeting between Duterte and Kovind held at the Malacañan Palace on Friday afternoon.

The two state leaders witnessed the signing of agreements that seek to improve cooperation in maritime security, science and technology, tourism, and cultural fields.

"We agreed to continue working together to fight terrorism and violent extremism," Duterte said.

The Department of Tourism and Indian Ministry of Tourism signed a memorandum of understanding (MOU) to enhance cooperation in the tourism and hospitality sector.

The Philippine Coast Guard inked an agreement with the Indian Navy to enhance maritime security through the sharing of information on non-military and non-government shipping vessels between the two nations.

A program of cooperation in the fields of science and technology for 2019 to 2022 was signed between the two countries' Science and Technology departments.

The last deal signed was a cultural exchange program between the two governments for 2019 to 2023. (NASE/SunStar Philippines)