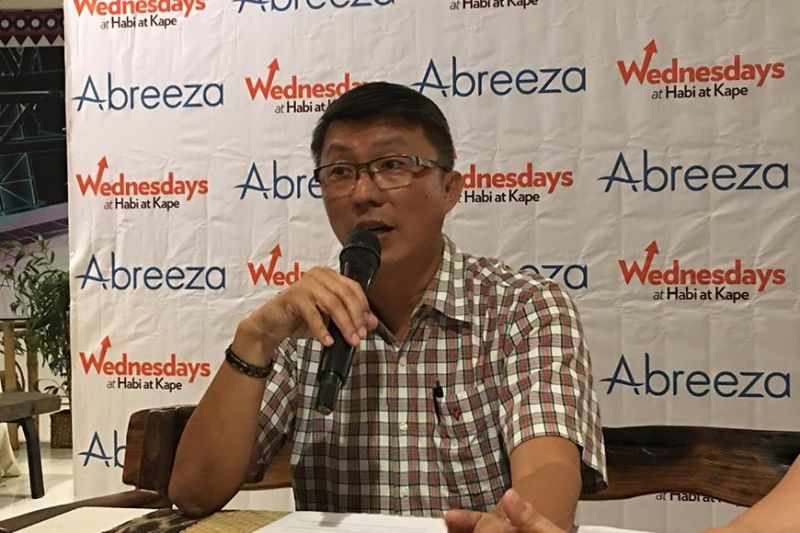 DAVAO. Alvin T. Teves, representative of the Hog Farmers of Davao, Inc. (Hogfadi) relayed their appeal to the city government to retain the import ban on live hogs and processed meat products coming from Luzon and other areas affected by African Swine Fever, during a press conference, Wednesday, October 116, 2019. (Rob Gumba)

A GROUP of hog producers warned a P500 billion loss in the Philippine live hog industry and its allied sectors if the African Swine Fever (ASF) enters Visayas and Mindanao.

On Wednesday, October 16, the Hog Farmers of Davao, Inc. (Hog Fadi) raised their concern about the possible losses in the industry should the local government units (LGUs) in the Visayas and Mindanao heed the call of Department of Interior and Local Government (DILG) Secretary Eduardo Año to lift the temporary ban on pork and processed meat products imposed on their areas.

Hog Fadi past president Alvin Teves said based on the record of the Mindanao Development Authority (Minda), the live hog industry alone is at P250 billion. But when the allied industries are taken into account, it would reach P500 billion.

Teves said the Sinag represented by its chair Rosendo So, has written a letter to Año expressing their concern after latter urged LGUs to exempt processed meat products from the ban.

The Philippine Association of Meat Processors (Pampi), a group of processed meat producers has also requested the same to Año.

“We are protesting. We are against it. Secretary Año said that processed food can be exempted from the ban and they wanted to lift the ban for the processed meat coming from Luzon and other ASF-positive countries to Visayas and Mindanao,” he said.

He said that Pampi does not have mechanisms to detect ASF in processed meat products. They have also requested the Department of Agriculture (DA) to test all frozen meat in cold storage facilities, through an independent third party like SGS, but no official action has been taken.

“How sure are you that it is [not infected]? As mentioned they don’t have the test,” Teves said.

So said in a statement that the claims of Pampi of the losses on the processed meat sector following the ASF is “miniscule” as compared to the P500-billion hog industry and allied businesses.

So added Pampi’s claim of losses is not equal to the declared value of their industry, as per the Board of Investment record.

In a report from the Philippine News Agency (PNA), Pampi vice-president Jerome Ong said the processed meat product import ban in Visayas and Mindanao will cause their industry to lose P50 billion since the regions represent about 30 to 40 percent of total sales of processed meat products.

So said the farm gate prices of backyard hog raisers are down to P70-80 per kilo, which is close to 40 percent drop from the pre-ASF level of P110-115 per kilo.

Teves said their Hog Fadi will be sending a letter to Davao City Mayor Sara Duterte-Carpio urging the city to keep the ban.

He assured that the city’s importation ban of pork and processed meat products from Luzon and other ASF-affected countries is still in effect.