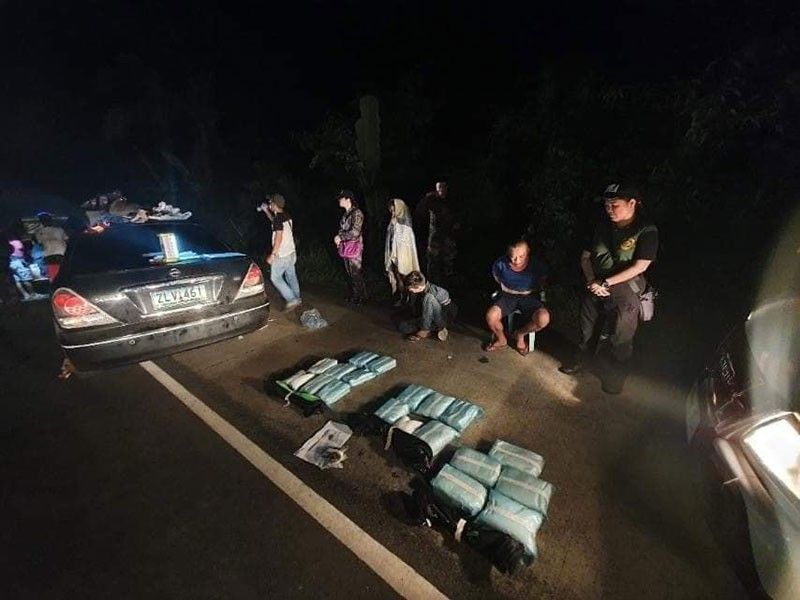 THE TRANSPORTERS. Six persons were hired to transport a total of 44 sealed blue plastic bags containing shabu in two vehicles from Manila to Cebu. But what would have been an uneventful trip from Calbayog, Samar to Cebu turned into an Ormoc, Leyte to Cebu trip that never was, after their plans and cargo were discovered at a checkpoint along Maharlika Highway in Barangay Tagnao, Gandara town, Samar on Thursday, Oct. 17, 2019. (Contributed Photo/PDEA Eastern Visayas) 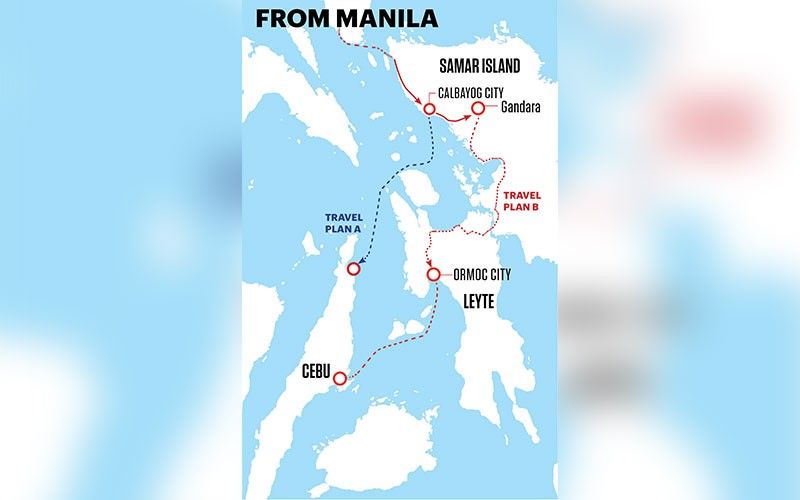 IN WHAT could be the biggest illegal drugs seizure in Visayas, police confiscated a shabu delivery worth almost P600 million from two private vehicles on their way to Cebu from Gandara town, Samar on Thursday afternoon, Oct. 17, 2019.

At least six persons, including a 14-year-old boy and a woman pregnant at four months, were arrested from the two vehicles. A total of 44 sealed blue plastic bags containing a white crystalline substance believed to be shabu were seized.

The traffickers’ method involved placing the illegal drugs shipment inside private cars and having groups of individuals take the cars from Manila to Calbayog, Samar, by ship. From Calbayog, they load the vehicles on another ferry bound for Cebu City.

But a snag in their plans led to their capture in a checkpoint along Maharlika Highway in Barangay Tagnao, Gandara at 4:30 p.m. Thursday. Since there was no ferry leaving Calbayog for Cebu, so they changed their trip, hoping to catch a ferry to Cebu from Ormoc City instead, but the police got to them.

They were on board a Mitsubishi Lancer with a license plate XTE 453 and a Nissan Sentra with plate ZLV 461.

The Regional Crime Laboratory in Region 8 or Eastern Visayas said the haul weighed a total of 88.49 kilograms with a street value of from P598.4 million to P600 million. This amount could be the biggest in a single bust in the Visayas. It already represents half of the P1.2 billion worth of illegal drugs seized in Central Visayas in one year, or from July 1, 2018 to July 1, 2019.

P/Brig. Gen. Dionardo Carlos, Police Regional Office (PRO) 8 director, said this was the biggest shabu haul in his region and this wasn’t even the first time. He said the delivery could be part of the P9.5 million shabu recovered last Aug. 10 in Biri Island. From that incident, police received an intelligence report on this modus of traffickers in transporting illegal drugs.

Carlos said those arrested could be going to Southern Leyte but it is likely they were bound for Cebu since most of them are from Cebu.

A police video of an interview of a suspect showed the suspect saying the groups were bound for Cebu. They came from a resort in Calbayog, on their way to Ormoc, then to Cebu by roll-on, roll-off (Ro-ro) vessel. Once in Cebu, they were to leave the vehicle in a mall parking lot.

Those arrested would be charged with violating laws against dangerous drugs while the minor would be transferred to the social welfare office.

Carlos said police are still investigating the persons behind this huge shipment of shabu. He lauded the Samar Provincial Police Office, Regional Drug Enforcement Unit 8 and the Philippine Drug Enforcement Agency 8 for the bust.

Some of those arrested said they did not know each other. They just joined the group to earn money, while others said they had joined the same trip before.

Uy told reporters he has a friend inside prison who connected him with the owner of the shabu. He was told to drive the vehicle from Manila to Cebu.

Those arrested said they knew they were bringing drugs but they were not allowed to open the bags where the shabu was placed. They had no idea that it was a huge shipment.

Based on the accounts given by the suspects to media, the cars were ready when they arrived in Manila Tuesday. The first car was picked up by Uy and Perez at the parking lot of a mall in Edsa while the second car was picked up by De los Reyes and company from Imus, Cavite. Car documents were complete and there was P10,000 for their expenses.

They got to Calbayog but were told to wait for each other at a resort in Gandara. They were supposed to take a ferry in Calbayog but they found out there was not one scheduled, so they decided to go to Ormoc and take the ferry from there to Cebu.

“Musakay dapat mi sa ferry diha sa Calbayog, kanang Ro-ro, unya kay wa man hinuon mi makahibalo nga wala diay biyahe karon. Unya basig makasab-an kami nga dili mi makaabot sa Cebu ugma. Mao nga nagdesisyon ko nga mu-deretso na lang ug Ormoc (We were supposed to take the ferry from Calbayog but we didn’t know there was no trip. Fearing we would be scolded if we did not arrive in Cebu the next day, I decided that we go to Ormoc City and take the ferry there to Cebu),” Uy said.

If they arrive in Cebu, they would leave their cars in a mall parking lot.

The wife of Perez, one of the arrested suspects, told Superbalita Cebu that she was surprised when she learned of her husband’s arrest. She said Perez is a jeepney driver running the Colon-Basak route in Cebu City. He probably was just hired to drive one of the vehicles, the wife said. Mambaling Councilor Seller Salvador confirmed that Perez is a resident of the barangay.

The PRO 7 based in Cebu City will conduct a background check on the Cebuano suspects. P/Col. Ildebrande Usana, PRO 7 deputy director for administration, said they will check if those arrested are in any of their watch lists. Usana added that the regional police would strengthen checkpoints at strategic locations to stop illegal drugs from entering Cebu.

P/Col. Roderick Mariano, Cebu provincial police chief, instructed station chiefs to be on the lookout after the haul in Samar was said to be intended for Cebu. Cebu City Police Director Gemma Vinluan also said security at the coastal areas has been strengthened. (John Kevin D. Pilapil & Ronald Reyes with AYB, BBT)