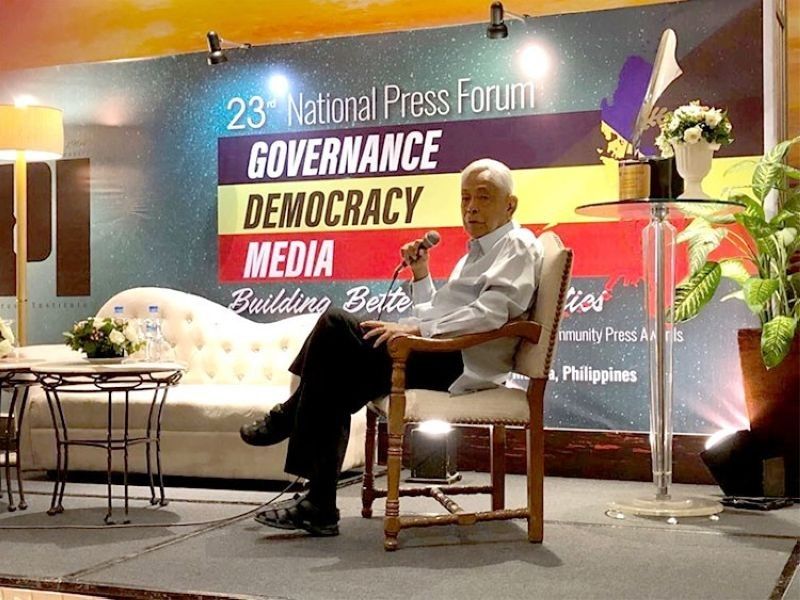 In his social media accounts, Senator Koko Pimentel, the eldest son of Pimentel, confirmed his passing and called for prayers for the late Senate president.

"Our beloved Tatay Nene has joined his Creator at 5 am today Oct 20, 2019," Koko wrote. "We thank all those who have been a part of his life. We ask for prayers for the repose of Tatay Nene’s soul. Thank you to all.”

He revealed that the late senator was sick with lymphoma.

According to WebMD, Lymphoma is cancer that begins in infection-fighting cells of the immune system.

He founded the Partido Demokratiko Pilipino (PDP) in February 1982 to oppose the then-ruling Kilusang Bagong Lipunan (KBL) of the late dictator Ferdinand Marcos.

Senators and other government officials expressed their sympathy to the former Senate president's family.

Senator Bam Aquino said that Pimentel's bravery is an inspiration to many.

Maraming salamat sa mga aral at inspirasyon, Sen. Nene Pimentel. Your courage and genuine love for our country will always be remembered. pic.twitter.com/TqjrmeynWT

"I’m offering my prayers for Ka Nene’s eternal rest. A sad day for the country. He will truly be missed," Hontiveros said.

“I’ve been there before in the Sen, like you. And it’s so difficult to be a minority, but regardless... keep fighting,” Sen Nene Pimentel told me early last year.

This is how I will always remember the Father of the Loc Govt Code: A FIGHTER.

In a statement, Cabinet Secretary Karlo Nograles mourns the passing of "a champion of democracy and human rights."

"Manong Nene's accomplishments as public servant will continue to guide and inspire us and the many generations to come." (JGS)