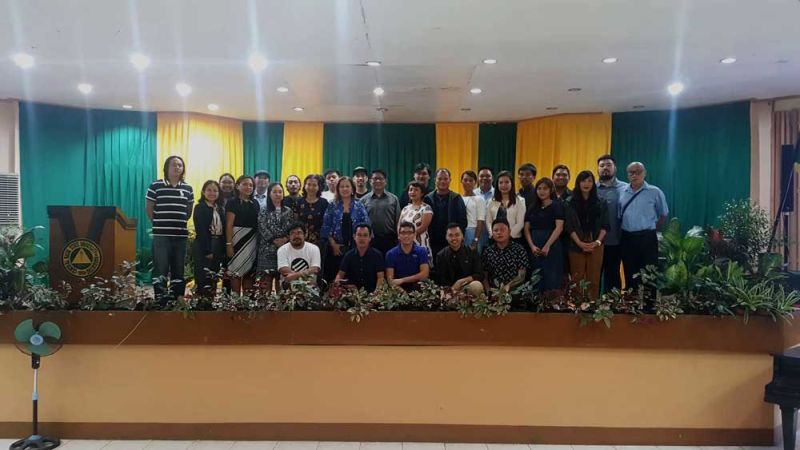 CD Borden, Bathalad Cebu president, led the group during the event, which was held at the Central Bicol State University of Agriculture in Pili town, Camarines Sur.

“This festival, our eleventh, brings together local and national writers and artists to celebrate the pleasure of hearing ideas, sharing stories and the spoken word. This year we are joined by over 70 writers for two days of inspired exchanges that will engage as well as entertain us,” Yu said.

The festival carried the theme “Lawas Literatura (Body Literature),” which, as Yu said, “focuses on the intersections of body and literature.”

On the literary festival’s first day, the Bathalad Cebu members—Borden, Kenneth Michael Baba and Kaiser V. Alemania—talked about creative writing and entertained questions from Bicolano students, some of whom were aspiring poets and fictionists.

The talks were moderated by Yu, who is the director of University of San Carlos’s Cebuano Studies Center.

Baba, a promising young writer, presented a paper on Cebuano writers living abroad who are still writing in their native language.

“There is not a trace about the humdrum of his diplomatic life in any of his verses, because, and I say this with absolute sincerity, this life does not warrant a line or two. There is no sense of urgency to it. There is no excuse to exercise the limits of the imagination. There is no possibility for poetry at all,” Alemania said.

Borden, a Palanca-winning fictionist, discussed the state of science fiction in Cebuano Literature. He talked about some Sci-Fi stories written by Gally Sayson.

He said a writer who lives in a technology-deprived place can still write good science fiction.

“Writing a good science fiction story is the same as writing a good story of any particular genre. All the writer needs is to be in touch with ‘the spirit of science fiction.’ Basically, he needs to invent a world or a universe—if you will—populated by characters and ideas that correspond appropriately to this new universe. It could be about a mutiny of robots against the whole human race, a romance between a woman and a Martian, a journey into the vast unknown and, albeit, fictional regions of outer space to explore an alien planet or, to put it more bluntly, it is whatever it is that tickles your cerebral cortex since you can sometimes invent science in fiction (although you can never invent fiction in science),” Borden said. (S)