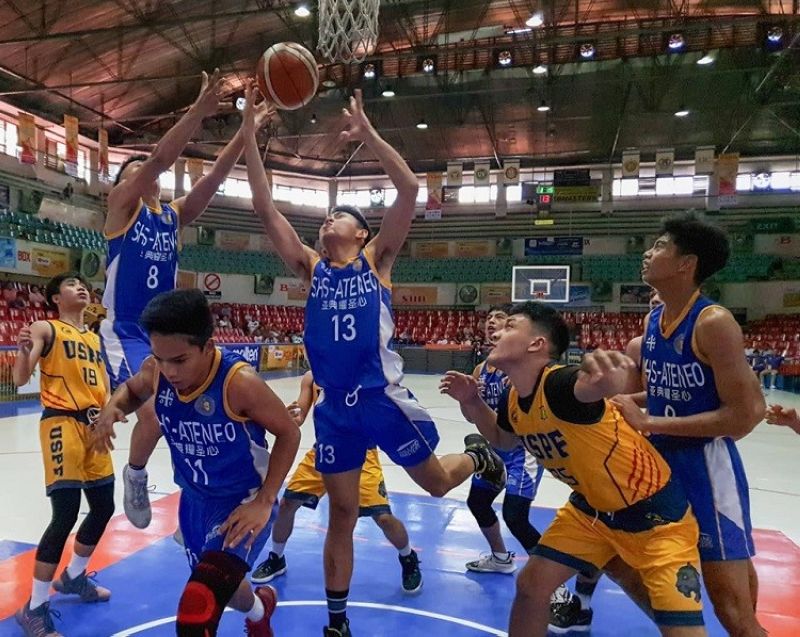 Players from USPF and Ateneo de Cebu go all out in their pursuit of the ball’s possession. (Photo by Arni Aclao)

Perimeter marksman Christopher Isabelo sparked USPF’s comeback with two triples and then later, got some crucial baskets from big men Jack Suello, Jack Suello and cat-quick guard Kyle Ochavo to complete the come-from-behind win that pushed their record to 7-2.

Down 63-73, Isabelo canned two triples while Suello added a deuce to bring USPF to within two, 71-73. The Baby Panthers was finally able to get over the hump after a three-pointer by Ochavo and a free-throw by Suello for an 81-80 lead, time down to 1:04.

Then, after Ateneo de Cebu’s LA Casinillo committed a dribbling violation, Singson made one of two from the line to push USPF’s lead to 82-80. Casinillo then airballed a three-pointer on the Magis Eagles’ next possession and Yap secure the win for the Baby Panthers by making two free-throws with just 7.2 ticks remaining on the clock.

The loss pulled Ateneo de Cebu down to 4-2. Raffy Celis and Casinillo had 16 markers each for the boys in blue.