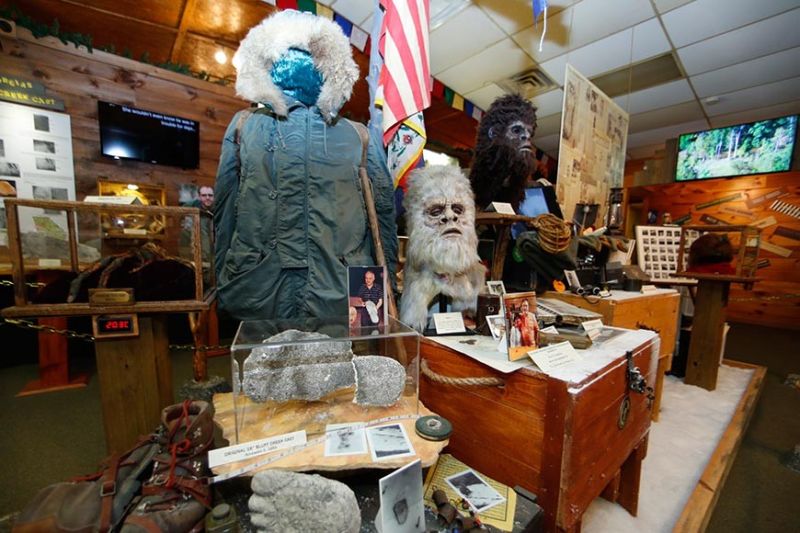 GEORGIA. This August 8, 2019, photo shows items donated by the family of Yeti researcher Tom Slick on display at Expedition: Bigfoot! The Sasquatch Museum in Cherry Log, Georgia. The owner of this intriguing piece of Americana at the southern edge of the Appalachians is David Bakara, a longtime member of the Bigfoot Field Researchers Organization who served in the Navy, drove long-haul trucks and tended bar before opening the museum in early 2016 with his wife, Malinda. (AP)

CHERRY LOG, Georgia -- Along a bustling four-lane highway that winds through the north Georgia mountains, an unassuming wooden structure breaks the monotony of churches, billboards and stores selling kitschy knickknacks.

Once a BYOB supper club, it's now ground zero in the search for a legendary beast.

"I can remember my great-grandmother talking about having a cabin in the woods, and she saw Sasquatch," said Sherry Gaskinn of Villa Rica, Georgia, who was driving by one afternoon and had to stop in. "I've always been curious."

Her husband, Phillip Blevins, lets out a skeptical chuckle.

The owner of this intriguing piece of Americana at the southern edge of the Appalachians is David Bakara, a longtime member of the Bigfoot Field Researchers Organization who served in the Navy, drove long-haul trucks and tended bar before opening the museum in early 2016 with his wife, Malinda.

He's looking to provide both entertainment and enlightenment in an area known for apple orchards and blazing fall colors.

"I wanted to take what I know about Bigfoot as an active researcher and investigator, but I'm also a huge Disney World fan," the 57-year-old Bakara said. "I was thinking, 'Maybe I can make this thing like a family attraction.'"

Instead of Space Mountain, the attraction not far from the Tennessee state line has an elaborate display of Bigfoot laying siege to a remote cabin, with a hatchet-wielding mannequin desperately trying to bar the door as two hairy paws burst over the top. Color-coded maps document hundreds of alleged sightings, a towering reproduction depicts a hairy 8-foot-tall beast, and the famed 1967 video of an alleged Sasquatch sighting plays on a loop, along with harrowing recollections from those who claim to have encountered a Bigfoot.

"The reason I didn't shoot it is, it was just too human," a hunter said in one account. "I couldn't pull the trigger because something told me this ain't right."

There's even a glass case claiming to hold feces collected from a Sasquatch in Oregon.

Believers continually add to the already ample collection. On a recent day, the mail carrier delivered two casts of footprints supposedly made by foreign Bigfoots.

"You want to see an Australian cast?" Bakara asked, tearing into the package.

He has filled up the former supper club and is planning to expand his museum, which welcomes about 50,000 visitors a year.

For those who think Bigfoot is a phenomenon confined to the Pacific Northwest, where that grainy video from more than five decades ago gave Sasquatch its greatest brush with fame, Bakara is quick to point out countless sightings the world over.

In Australia, the mythical creature is known as Yowie. In the Himalayas, they call it Yeti. In Russia, it goes by Alma.

"There are several subspecies of these things," Bakara claimed, displaying nothing but sincerity. "Some have short hair. Others have long, red flowing hair. Some are multicolored, almost like a squirrel where's there's gray and red and brown mixed together. Some of them have a very human-like face. They just run the gamut."

He'll gladly tell you about the time he saw a pair of the elusive beasts.

In 2010, Bakara said, he was summoned by a Florida man who had spotted strange creatures on his property. Using a thermal imager, he and his team were able to make out a pair of creatures emerging from a nearby swamp.

"We took turns looking at them," he said. "They finally figured out we could see them, so they left."

Bakara could talk all day about what's become his life's work but clams up on the most obvious questions:

Where did it come from?

"That's a secret we're not supposed to know about," he replied ominously.

Bakara implied that the creatures are the unintended consequence of a government experiment gone haywire, hinting that his life would be disrupted if he ever went public with his entire body of work.

Bakara has been interested in Bigfoot since a young age, spurred on by early news reports and the 1972 cult classic "The Legend of Boggy Creek," a sort of docudrama about a Sasquatch-like creature supposedly hunkered down in Arkansas.

He knows he'll never persuade all the people — even most of the people — of Bigfoot's existence, and he's fine with that.

"Does everybody need to know everything you know?" Bakara asked. "No. It's best they don't know.'

There are doubters, of course.

One person signed the guestbook as "Bigfoot," listing his home as the "Woods." In the section that asks "How did you hear about us," the visitor wrote: "People were taking my picture."

But Bakara said most visitors treat the museum with respect, at least while they're on the grounds.

"I'm just curious," said Angie Langellier, who stopped in with her family recently while passing through on a trip from Illinois. "So far, I've had nothing that's convinced me. "But obviously, a lot of people have seen a lot of things that have convinced them." (AP)