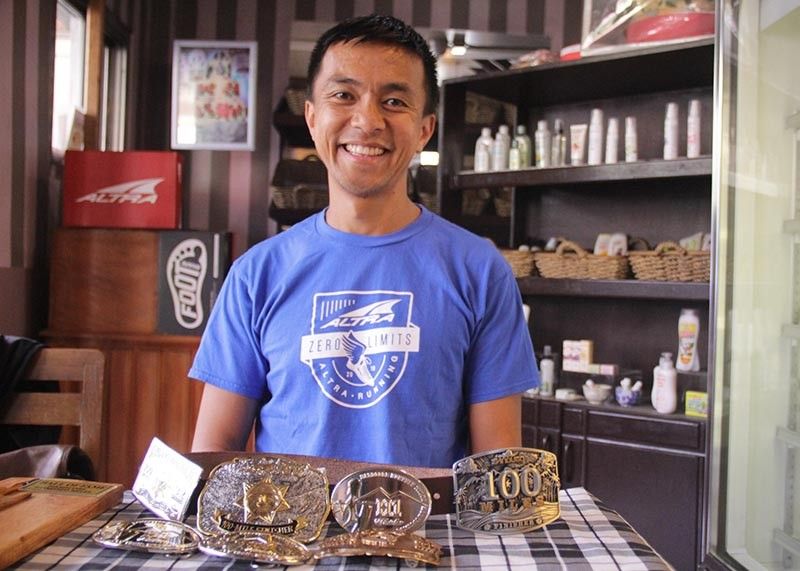 BENGUET. Runner Jovencio Luspian from Mankayan, Benguet shows some of his buckles he gained competing in several ultratrail running event. He said trail running has helped him change his lifestyle. (Photo by Lauren Alimondo)

CONQUERING a total of 160 kilometer trail run one after the other within the Philippine archipelago did not come easy for Ultratrail runner Jovencio Luspian from Mankayan, Benguet.

This year, he recently bagged second place in 160-kilometer or 100 miles run category in Sandugo Pacific Coast Ultra at General Nakar in Quezon with a time of 26 hours, 42 minutes.

In the King of the Mountain run this year, he reached top five with a time of 32 hours, 54 minutes and was hailed the champion during the 2018 100 mile race in Taklang Damulag, Nueva Ecija.

But finishing four different runs and being able to obtain buckles was not an easy task for the Benguet runner.

Luspian, a nurse and pharmacist by profession, currently worked in a bakery business with his wife and a hands-on father to his three children.

His journey to running started almost a decade ago as a form of exercise and change of lifestyle by joining fun runs and then marathons, until he took part in 100-kilometer trail runs.

The Cordilleran started his first trail run back in 2012 in Itogon, Benguet and in the next two years, he conquered his first 100 kilometer race in Baguio-Benguet where he finished the race for almost 27 hours.

Taking cue from the stories of experienced runners from 100 kilometers, he challenged himself to finish 160 kilometer run.

However, his first 160 kilometer run in Taklang Damulag, Nueva Ecija was uneventful as he did not finish the race.

The 38-year-old was unfazed and attempted join another 160-kilometer run, the Hardcore 100 miles under the King of the Mountain series in 2017 in the triboundaries of Kayapa in Nueva Vizcaya, Kabayan and Itogon, Benguet.

The trail run welcomes runners to the mountains of Northern Luzon, Mt. Pulag and Mt. Ugo.

After completing the Hardcore 100 miles, he again set his sight and motivated to finish Taklang Damulag the same year but fell short by just 15 minutes from the cut–off time.

Moving on from another sorry stint in Taklang Damulag, he set his sight for the world's oldest 100 mile run: The Western States 100-mile Endurace run in the United States that started way back 1974.

Luspian was moved after his province mates held a fund-raising event for him to join the event.

During the event, he was escorted in the finish line by Cordillerans waving the Philippine flag while wearing the inabel, a traditional Cordilleran woven blanket given by his grandmother.

After his conquest in the U.S., he returned to the country, opting to join another Taklang Damulag for the third time where he was able to finish the race with a time of 28 hours and 52 minutes and eventually becoming the overall champion.

Every race he describes had challenges of their own.

Luspian narrated the recent Sandugo race was runnable, but heat remains a challenge.

He added that Taklang Damulag requires mental challenge as most of the race circuit was repetitive compared to the Hardcore 100 with elevation challenge from Kayapa.

Traversing the mountainous area of Pulag and Altra had mixed elevation challenges. However, on the positive note there was the breathtaking rice paddies of Ifugao.

For the Cordilleran, endurance run helped him change lifestyle.

"You are focus to eat well, less sweets, less carbohydrates before the run. For the Western States Run, I dwell into Keto diet - high fat and low carbohydrates," he shared.

For him, running is a way of distressing, unplugging from social media and making it a point to choose quality of the race to pursue.

"When I started running ultramarathons, I wanted to test how hard I can push myself and how far I can run. So by doing these races, it shows how one can accomplish anything if they put their heart into it. That they can balance work, family and training," he added.

The Benguet runner is having an off season for the remaining months this year and aiming 2020 to pursue runs outside the country.

He remains bullish for fellow Filipino runners to also challenge the 100-mile runs feted in the Cordillera.

"When you have running, you have something to focus on. And there is always a finish line," he closed.