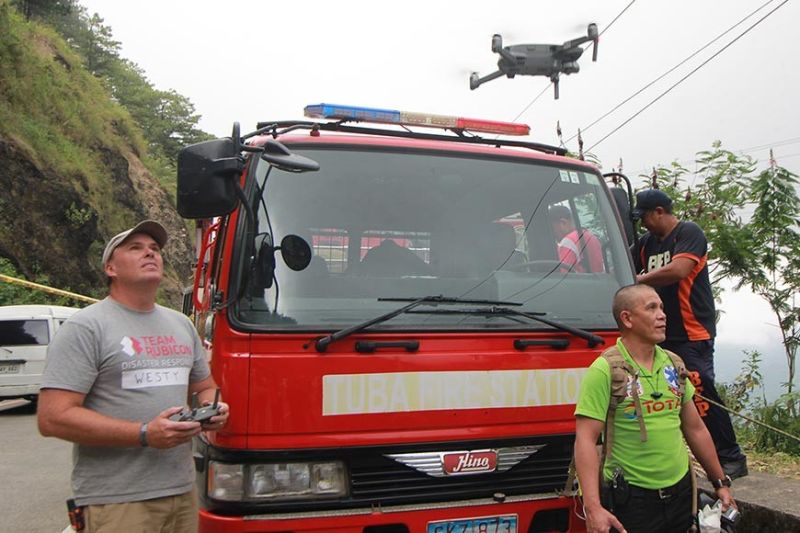 BENGUET. A group of Australians from team RUBICON, an international non-profit organization of support veterans responding to disasters, provided aerial footages of the site where eight cadavers were retrieved along Sitio Poyopoy along Marcos highway, Tuba, Benguet. (Photo by Jean Nicole Cortes)

TUBA, BENGUET -- Gravesites and proper burial will be made for the remaining five unidentified cadavers found along Marcos Highway in Sitio Poyopoy, Barangay Taloy Surm, Tuba, Benguet as one more body was identified.

The body of Alfredo Domilos Lamenta Jr., also known as “Junie Batang-e,” was identified by his former wife after she saw his tattoo.

According to Lamenta’s relatives, the victim was missing since September 24. His remains were already sent home to Tadian, Mountain Province.

Meanwhile, town officials said they are disturbed by the foul smell emanating from Damayan Funeral Homes in Marcos Highway and have sought the help of residents for the burial.

Acod added Saturday, October 19, that while awaiting for the families to claim the bodies, gravesites will be made for the three decomposed bodies and two skeletal remains.

Fahad Manan Macalanggan, 28, a native of Marawi City; and Kent Licyayo, 22, a native of Ifugao, were earlier identified by their relatives.

Police Lieutenant Colonel Lourdes Juan, Provincial Chief of the crime laboratory, said it was difficult for them to identify the bodies as most of it were in the advance stages of decomposition.

Scene of the Crime Operatives (SOCO) findings revealed that the bodies did not sustain gunshot wounds, while one of the identified body bore traumatic injuries on the chest area.

The bodies have been dead for at least two weeks, one for almost a month, while the skeletal remains were estimated to be a year old.

DNA tests were conducted to the retrieved cadavers and results may take up to 30 days.

Police Regional Office–Cordillera (ProCor) and Benguet Provincial Police Office (PPO) earlier pledged to leave no stone unturned to identify the perpetrators and to conduct thorough investigation of the case.

“ProCor shall do all it can to identify the cadavers and skeletal remains for the sake of their families and help them seek justice and find closure,” ProCor said in a statement.

Benguet PPO has already reached out to all other PPOs to relay any information on reported missing persons in their areas of responsibility which can help fast-track the identification of the cadavers.