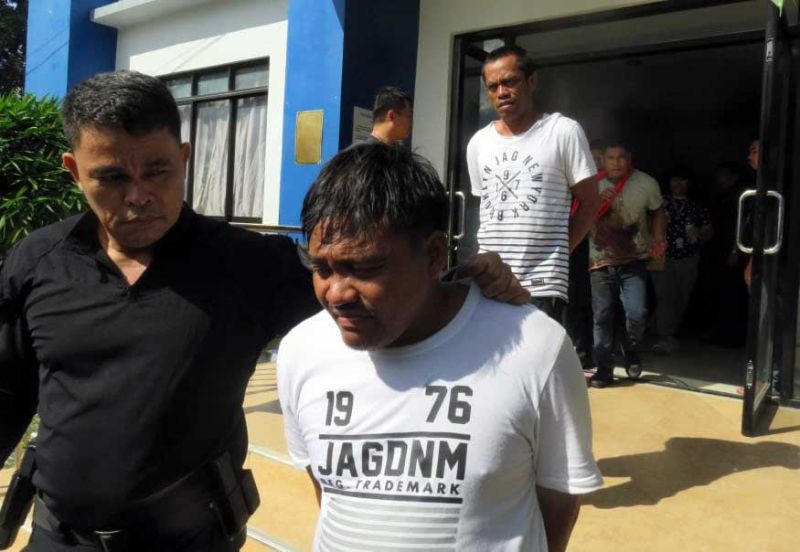 DOWN TO FIVE. SWAT personnel from the Bogo City Police Office escort five arrested suspects in Saturday’s J Centre Mall heist. In photo, Jun Candelaria (foreground), James Anthony “Macky” Gomez and Arnel Cimafranca (wounded, at the back) are led out of the Bogo Police Station detention cell for transfer to the Mandaue City Police Office Sunday, Oct. 20, 2019. Four other suspects were shot dead during the hot pursuit operation in Polambato Wharf in Bogo City, where the getaway vehicles were supposed to board a ferry to Masbate. Inset, the Toyota Innova and four motorcycles seized from the suspects. (SUNSTAR FOTOS / ALLAN CUIZON) 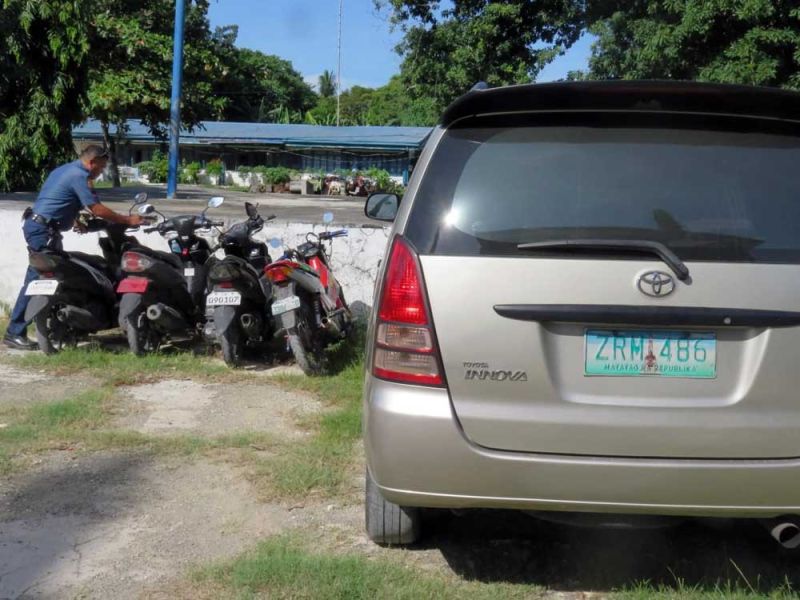 DOWN TO FIVE. SWAT personnel from the Bogo City Police Office escort five arrested suspects in Saturday’s J Centre Mall heist. In photo, Jun Candelaria (foreground), James Anthony “Macky” Gomez and Arnel Cimafranca (wounded, at the back) are led out of the Bogo Police Station detention cell for transfer to the Mandaue City Police Office Sunday, Oct. 20, 2019. Four other suspects were shot dead during the hot pursuit operation in Polambato Wharf in Bogo City, where the getaway vehicles were supposed to board a ferry to Masbate. Inset, the Toyota Innova and four motorcycles seized from the suspects. (SUNSTAR FOTOS / ALLAN CUIZON)

FOUR of nine men nabbed for robbing three jewelry shops, a money changer and a pawnshop in a mall in Mandaue City Saturday have been killed in an operation in Bogo City in northern Cebu, while one has been wounded.

Arnel Cimafranca, 38, was wounded. He confirmed that they had robbed the mall.

Cimafranca said he was dragged into the crime when a neighbor promised him a job. He didn't expect it to be this kind of job. He just agreed to join so he could provide for his family.

Joseph Zanoria, a security guard of one of the robbed jewelry stores, sustained injuries after he tried to respond to the incident. One of the suspects struck him with a firearm.

He was brought to the hospital for medical attention.

Police Major Emily Santos of the Bogo Police Station said they have not recovered the jewelry. The suspects said it had been taken by other members of the group.

“They said the jewelry was placed in a bag, and one bag was taken from them and brought to another vehicle whose whereabouts we have been unable to trace. But we have already disseminated the color of the vehicle,” Santos said in Cebuano.

According to Santos, Police Staff Sergeant Jojit Potot was on duty in Polambato Wharf in Bogo City around 11 p.m. when he noticed four men coming from the beige Toyota Innova captured in the CCTV footage of the J Centre Mall in Mandaue.

Potot approached the four men and inspected their IDs and driver’s licenses, which showed that most of them were from Mindanao. Confirming from the CCTV that these four were the robbers, they immediately arrested the four men.

These men told the police that there were three others on a roll-on, roll-off vessel that was to depart from the wharf.

Police caught a total of seven robbers in the Polambato wharf, three of whom were subsequently killed after they attempted to grab the firearms of the police.

In a separate operation around 1 a.m. Sunday, James Anthony Gomez, 44, riding a motorcycle, was stopped at the Sogod checkpoint where on inspection, his license showing he was from Ozamiz was found to be expired.

Gomez told police he would just fetch someone from the Polambato Wharf, so the police escorted Gomez to the wharf. Gomez was to fetch Glen Tairos, 47, from Talisay City, the suspected leader of the robbers.

On seeing Gomez at the wharf with the police, Tairos fired his gun. When police tried to wrestle it from him, Tairos resisted, resulting in his instantaneous death.

These men were allegedly from the Ozamiz robbery group. Some had records with the police and were in the wanted list of Liloan, Cebu, Consolacion, Talisay and Bacolod.

However, the authorities are still tracing the origin of these suspects.

At the crime scene in the mall, police authorities recovered 10 metal fragments, four fired cartridges, one live ammunition, one misfired bullet, and one deformed slug.

Mall management declined to give SunStar Cebu a statement on the matter.

Police Colonel Jonathan Abella, the Mandaue City Police Office director, said the suspects were already at the J Centre Mall around 6 a.m. to park their motorcycles in the basement as seen in the malls’ CCTV footage.

The suspects had designated roles. Some were assigned to break the glass and get the valuables. Some guarded the pickers. Some fetched the bag, while others were getaway drivers.

Abella said there were lapses in the mall’s security, since only the security guards of the mall had firearms.

“All guards are supposed to be armed. So we will now look into their rules to find out why the guards inside the mall had no firearms,” Abella said in Cebuano.

He recommended that jewelry stores have a second protection aside from the glass of their display that could protect the items after the glass breaks.

He also suggested that police have a roving time in malls to prevent untoward incidents.

The suspects rented a pension house in the vicinity of J Centre Mall a week ago and had been planning their scheme, said Abella.

Mandaue City Mayor Jonas Cortes commended the police for their quick apprehension of the robbers.

In a statement, Cortes also said, “We will call a meeting of the City Peace and Order Council to assess the security situation of the city.”

He requested the J Centre Mall management to cooperate with the authorities in the investigation of the incident, and encouraged all establishments to strengthen their security measures and come up with an evacuation plan for use during a similar incident.

“We ask all Mandauehanons to report any suspicious-looking persons to the proper authorities,” Cortes added.

The five suspects have been turned over to the Mandaue City Police Station. The bodies of the deceased are at the Cosmopolitan Junquera Branch, waiting for relatives to claim them.

The Mandaue City Police Station is coordinating with its counterparts in Mindanao on the case.

The authorities are now processing the documents for the filing of cases against the suspects, one of which will be robbery.

“I will call a meeting on Tuesday with all mall managers and security officers together with the CCPO to be apprised on their security preparations, especially in regard to those who are going in and out of the mall,” Labella said.

The mayor ordered Vinluan to have the police conduct roving patrols in malls in the city to deter crime.

In 2011, two security guards and three robbers died, while three others, including two cops, were hurt during a failed robbery incident in a bank inside a shopping mall along Fuente Osmeña, Cebu City.

In 2016, two security guards were also wounded in a shootout with four to five men who robbed a jewelry shop inside a department store in Sitio Tangasan, Barangay Valladolid, Carcar City. (with Philip A. Cerojano)