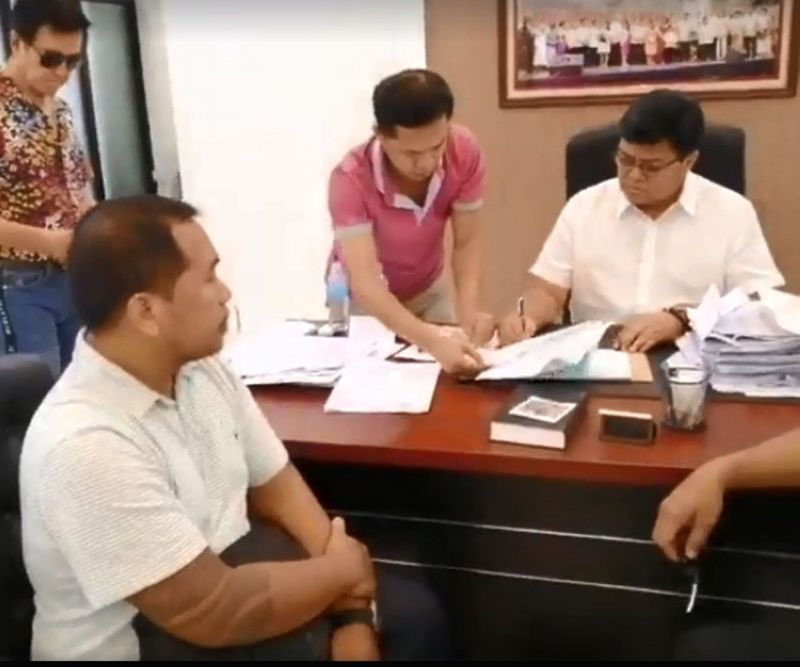 Rodolfo Ugang Jr. (left, seated) talks Cebu City Mayor Edgardo Labella to clear his name after "police officers" allegedly came to his home, forcibly opened his parked car and told him he is under surveillance for being allegedly involved in the robbery of four establishments inside the JCentre Mall in A. S. Fortuna Street, Mandaue City, which is just a few meters away from his home. (Grabbed from SunStar Facebook Live)

A BUSINESS Process Outsourcing (BPO) manager has sought the help of Cebu City Mayor Edgardo Labella after police allegedly suspected him of being one of the suspects that robbed four establishments at the J Centre Mall in Mandaue City last Sunday, Oct. 19, 2019.

Rodulfo Ugang Jr. told Superbalita Cebu that he sought the mayor's help when police allegedly came to his apartment at A.S. Fortuna Street and forcibly opened his car.

Ugang met with Labella at the latter's office on Monday morning, Oct. 20.

When he came to inquire what they were doing, Ugang was told by the police officers that he was subject of their surveillance for at least two months as he was allegedly involved in the armed robbery that occurred at the J Centre Mall a day earlier.

Ugang said he decided to approach the mayor as Labella and his father, who is a lawyer, are good friends.

Ugang and his family has been living at their unit for two years.

While the robbers who were living next door to them started living there two months ago.

Separately, Labella said he plans to ask Mandaue City Police Office (MCPO) director P/Colonel Jonathan Abella to hear Ugang's side so he can clear his name.

Labella said he will have a meeting on Tuesday morning with all mall owners and security agencies to discuss the need to increase security measures in malls and department stores to prevent a similar incident from happening.