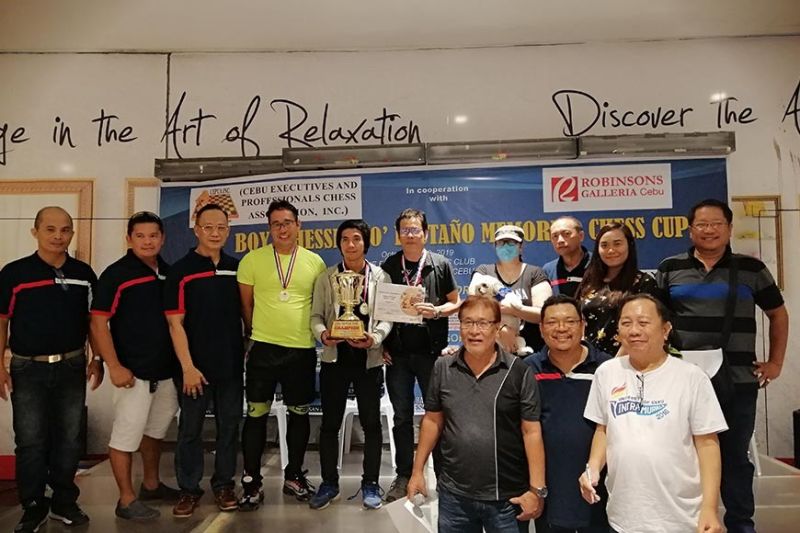 THE Noah Declan Chess Team from Bohol stole the limelight from the Cebu teams and bagged the championship in the 3rd Boy “Chessmoso” Pestaño Memorial Chess Cup Tatluhan Rapid Tournament on Sunday, Oct. 20, 2019, at the Barracks Chess Club in Robinsons Galleria.

Norman Lonjas, Glicerio Pardillo Jr. and Genesis Apog garnered 16.0 points in the team tournament to walk away with the coveted crown and the P30,000 grand prize.

Fide master Anthony Makinano, Dr. Leo Lofranco and Robert John Padel of Triple Lima of Catbalogan, Samar came up with 14.0 points and outlasted AimCoop in a tie-break for second place. They won the P20,000 cash purse.

It was a sweep for the visiting teams as Jaime Roumundo Edades, Wilhelm Joey Ardiente and Cecil Cuevas of AimCoop from Aurora, Zamboanga del Sur secured the last podium spot.

The Bachelors of Richard Natividad, Ruel Nuttal and Martin Sean Kwan was the highest ranking local team with 13.0 points at fourth place, while Sagay Chess Club A settled at fifth place with identical 13.0 points.

The teams that made it to the Top 12 are the Dark Horse, CDEO Veterans Moves, Mamaslang, Pawn na Pula, Chesson, Cebu Strikes and EVC. The sixth to 12th placers all won P2,000 consolation prizes.

International Master Joel Pimentel of Sagay Chess Club A was the top player for Board 1, Pardillo of Noah Declan Chess Team won Board 2 and Eduardo Tare II of CDEO Veterans Move won Board 3.

The tournament organized by the Cebu Executives and Professionals Chess Association (Cepca) drew 64 teams or 192 players over two days. It was held in honor of the late Boy Pestaño, one of the founding fathers of Cepca and also a former sports columnist at SunStar Cebu and SunStar Superbalita.