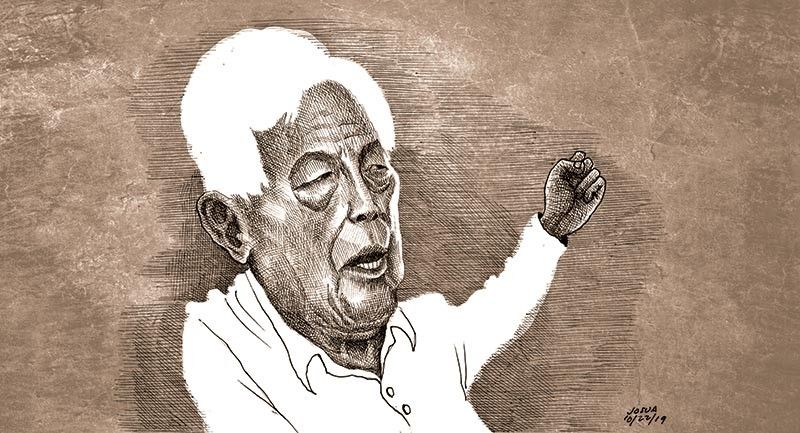 A SENATE revamp in November 2000 removed then Senate president Franklin Drilon for his statements on the Juetengate scandal of President Joseph Estrada from his post and installed Sen. Aquilino “Nene” Pimentel Jr.

By December, Estrada’s impeachment case took off in the Senate with Pimentel at the helm.

The Senate hearing culminated by January with the question on whether to open the second bank envelope or not. Pimentel was one of those who voted for its opening, but unfortunately, they were outnumbered by the No votes. He explained his vote to open the envelope thus:

“I vote to do so because that is the only way to determine whether or not the contents of the envelope are relevant or material to the case at bar. Because of this development, Mr. Chief Justice, I realize that the NO’s have it. And therefore, I resign my presidency of the Senate as soon as my successor is elected.”

Aired live on TV, the whole nation saw the opposition senators walk up to the Senate President and wept over his shoulder. The big man Drilon was first to do so, followed by others. But at the center of it all was Pimentel, teary-eyed as well and comforting his colleagues in the opposition.

So there was the image of Pimentel Jr., a steady anchor at every turbulent turn in the country’s history. But last Sunday, Oct. 20, 2019, he bowed out of his final battle for his life. He was 85 years old.

The country’s colorful narrative on the Marcos Martial Law period can’t be anything real without mentioning Pimentel Jr., he who stood staunchly against the regime and had to be arrested four times, the last one he served under house arrest. It was not as though he needed extreme spectacle to become the hero that he was. To the people of Cagayan de Oro, Pimentel was already a living hero even at the outset of the Marcos dictatorship, at various times contributing to his campaign funds to sweep administration candidates in every elections. The regime’s attempts to quell this man from Mindanao waned when his supporters rallied whenever the threats came around.

In all, one can say that Pimentel Jr. was there, unwavering through the country’s highs and lows, surviving the tides of politics by mere principle. Where it’s Philippine norm for politicians to sway to the side of expedience, Pimental Jr. was a steady anchor, choosing to implant himself in the right places of history. He leaves behind a legacy of important laws on local government, the police, among many others.

His wife, Lourdes “Nanay Bing” recalls Pimentel’s constant advice each time they needed to confront the many trials in life: “Be brave. Don’t cry.”

In this unfortunate season of political rifts from top to bottom, no other message resonates as much as it does today.