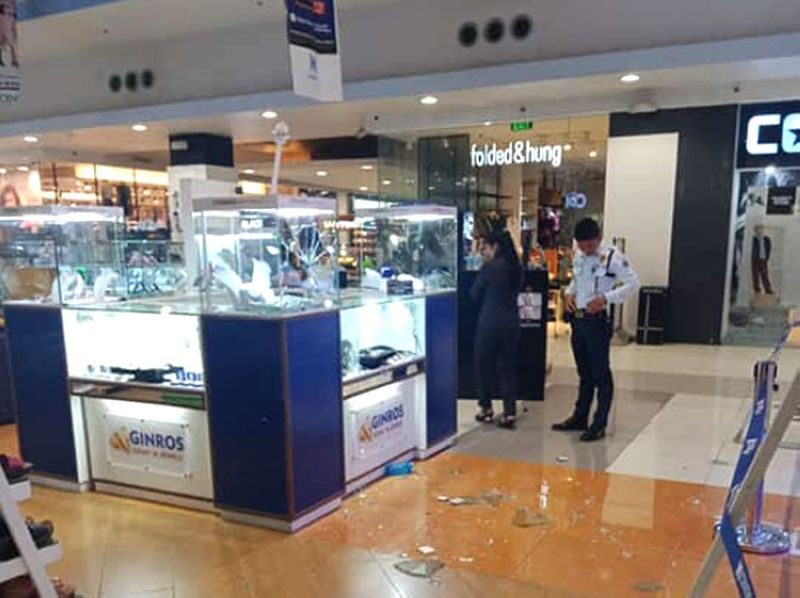 SOME eight years ago, on September 5, 2011, a Monday, robbers held up a bank teller at Robinson's Place along Fuente Osmeña, Cebu City.

How did that compare with the heist at J Centre Mall in Bakilid, Mandaue City last Saturday (October 19)?

The Mandaue heist is bigger in loot and scope than the 2011 Fuente caper:

[1] LOOT: The Mandaue robbers took away P138 million in jewelry, cellphones and cash, not counting almost P400,000 in P1,000 bills. The Fuente robbers were after a bag containing only P1.2 million picked up by the bank teller from a money changer. No store or shop at Robinson's mall was the target.

[2] TARGET, ROBBERS INVOLVED. Police counted 15 robbers and five shops or stores as targets in the Mandaue robbery. "At least four robbers" took active part at the Fuente holdup and only one bank teller was the target.

What made the Fuente robbery stand out was the drama. It would've made a better movie.

While there was little violence at the Mandaue holdup (a security guard was gun-whipped) and no civilian or police officer was killed or wounded at the mall, it was bang-bang-bang at the Fuente scene. Two security guards and three suspected robbers were slain and three others, including two policemen, were wounded at the Robinson's gunplay.

Compare that to the Mandaue robbery: no shootout at the J Centre mall; the post-robbery gunplay flared up more than 96.8 kilometers away, at the Bogo City wharf in Pulambato when one suspect allegedly shot it out with the police and, in another instance, after the suspects were collared by the Bogo police, three of them allegedly tried to grab the cops' firearms and were killed.

The P1.2 million loot in the Fuente robbery was recovered. Bulk of the P138 million was still missing as of Monday, October 21.

The marked difference in the killings is that there was no question about an actual exchange of gunfire between robbers and cops in the 2011 robbery. In the 2019 killings of robbers, there's only the claim of the Bogo police that there was unlawful aggression by the robbers and self-defense on the cops' part since the slain robbery suspects (at least three of them) were already in police custody.

Also in the Fuente shootout, two security guards were killed and two police members were wounded. No cop was killed or injured in the Bogo clash and only one guard suffered some injuries from the gun-whipping.

A disturbing common element in the two big robberies is that in both the 2011 Fuente heist and the 2019 Mandaue job, most of the suspected participants were "exports" from Mindanao, notably from Ozamis City.

They were not home-grown thugs, although a few were picked up from among the Cebu natives.

It should worry us that the source of Cebu's worse robbery incidents has been identified. What would our leaders do about it? Establish sister-city ties with, say, Ozamis City?