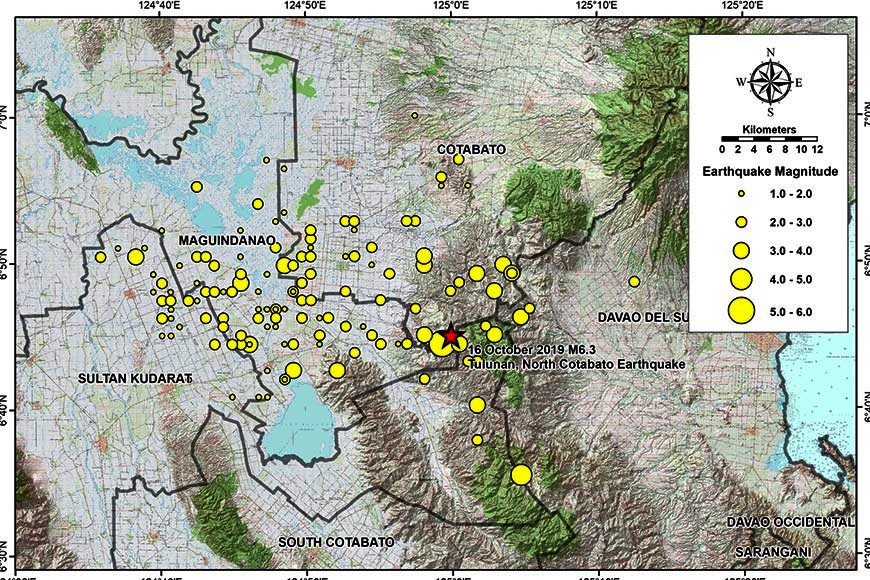 AS OF noon Monday, October 21, a total of 457 earthquakes, including aftershocks, occurred in Mindanao since the magnitude 6.3 tremor that struck the island in the evening of October 16, said the Philippine Institute of Volcanology and Seismology (Phivolcs).

Based on Phivolcs Earthquake Intensity Scale (PEIS), magnitude 3 is a "weak" intensity that would be felt by many people indoors, especially on upper floors of buildings, while vibrations will be felt like the passing of a light truck.

Magnitude 4 is a "moderately strong" intensity wherein it would be felt generally by people indoors and some people outdoors. Light sleepers are awakened, while vibration is felt like the passing of a heavy truck.

Magnitude 5 is a "strong" intensity wherein it will generally be felt by most people indoors and outdoors. Strong shaking and rocking can be felt throughout the building.

Magnitude 6, which was experienced in Tulunan, Cotabato, is a "very strong" intensity, wherein heavy objects and furniture move or may be shifted. Very old or poorly built houses and man-made structures are expected to be slightly damaged, though well built structures are not affected.

According to the PEIS, most quakes occur in Cotabato. However, the intensity of the aftershock can be felt in other neighboring places, including Davao City.

Phivolcs said in its website that Soccsksargen, where Cotabato is located, is one of the seismically active areas in the country because of the presence of the western extension of the Mindanao Fault (Cotabato-Sindangan Fault).

The agency said the active fault traverses Sarangani province to northwest of Zamboanga Peninsula. Cotabato Trench is also a major source of earthquakes, which can affect the region. There are other nearby local faults, some of which may be covered by recent deposits, and could be sources of small to strong magnitude earthquakes.

"Somewhat normal naman din siya na matuturing kasi medyo malakas din yung main shock (6.3 magnitude), kaya from time to time, we cannot distinguish yung timeframe kung gaano kalakas and kelan uli yung sunod na pagyanig (It can be considered normal brought about the trend since the 6.3-magnitude quake was the main shock. From time to time, it can be felt in the coming days. Though we do not have a timeframe of how strong it could be or when the next one will happen)," Vidad said in a phone interview on Monday, October 21.

But he said the probability that an earthquake higher than 6.3 will occur from the same source is low.

He also clarified that there is no pattern on the recent quakes contrary to claims of some netizens.

"We don't see any pattern, but we're closely monitoring on its activity in any hours," Vidad said.

The Davao City Disaster and Risk Reduction Management Office (CDRRMO), meanwhile, said in a Facebook post that it has not recorded so far major damage in properties since the magnitude 6.3 tremor.

CDRRMO training officer Lyndon Ancajas said their office is closely monitoring the bulletin of Phivolcs for they are expecting another aftershock.

He also said the earthquake last week is currently the strongest experienced in Davao City.