Health office yet to receive report on playgrounds 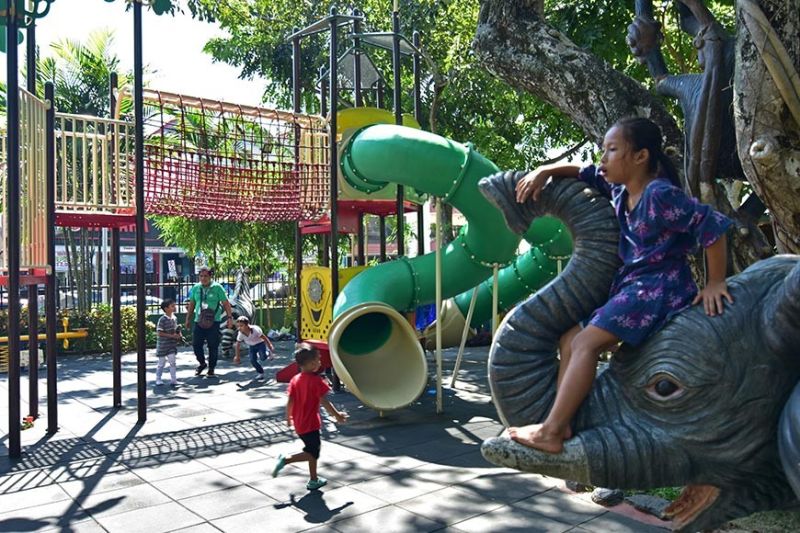 DAVAO. The Ecowaste Coalition, according to its study, has identified playgrounds in People's Park and Magsaysay Park as areas with high levels of lead, which can affect the health of a child. The lead was detected on paint of the outdoor playground. (Macky Lim)

THE Davao City Health Office (CHO) said Monday, October 21, it is not aware of an environmental group's report that said paints used in public playground in the city contain high levels of lead.

This came after EcoWaste Coalition said Sunday, October 20, that paints used in public playground equipment at the Magsaysay and People's Parks in Davao City contained dangerous amounts of lead, which poses a serious lead poisoning risk for young children.

But the group said no lead was detected on the play equipment screened at the Osmeña Park near the Sangguniang Panlungsod building.

According to the group, 50 out of 55 play equipment, including those from Davao City, had total lead concentrations above 90 parts per million (ppm), the limit set by the Department of Environment and Natural Resources (DENR) under Administrative Order 2013-24, and reiterated by the DENR-Environmental Management Bureau (DENR-EMB) Memorandum Circular 2016-010.

"Multi-layered lead painted surfaces were found to be most hazardous with lead levels reaching hundreds of thousands. For example, an old multi-coated monkey bar at the Magsaysay Park was found to contain 100,000 ppm of lead,"

CHO head Dr. Josephine Villafuerte said they have yet to receive the report, after the group said it will formally write to the City Government to notify it about the results and to suggest remedial actions, including replacing the lead-coated play equipment with lead-safe ones, to prevent childhood lead exposure.

"Dapat sana mag-upo sila (with us) para ma-discuss ng maayos (kung) ano dapat gawin, kasi mahirap ilabas mo naman kaagad (ang result) ng wala kang gagawin (They should sit down with us to discuss what we can do about this instead of releasing the report without any actions that could be implemented)," Villafuerte told SunStar Davao in a phone interview.

She said the supervision of the playgrounds in the city is under the City Environment and Natural Resources (Cenro).

But the health official said they are looking into monitoring these playgrounds, particularly on the paint they are using on the equipment.

Meanwhile, she reminded the parents to supervise and monitor their children while playing in the playgrounds.

She also said parents should warn their children from putting their hands in their mouth after holding the playground equipment.

Villafuerte also said parents should not allow their children from biting objects, which have paint, for having lead ingestion could pose harm to the body.

According to the World Health Organization (WHO), lead exposure affects human health, especially for children.

WHO also said lead is dangerous as it will affect the children's developing brains and can cause reduced intelligence quotient (IQ) and attention span, impaired learning ability, and increased risk of behavioral problems.

EcoWaste, in a forwarded statement, said they are calling for the banning of lead in all paints, especially for applications that can expose children to lead contamination.