Up for stiff challenge 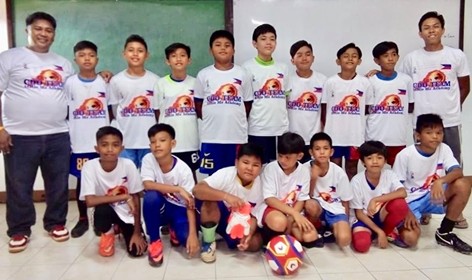 The CdeO boys U12 team of coach Marlon Merlin was formed barely a month ago and is made up of players from City Division meet winners West City Central School, Kauswagan FC, International School and Little Me Academy.

Players from other winning schools -- Rosevale School and Corpus Christi School -- were invited but begged off to skip the event due to conflicting schedules at school.

"This team although was formed only less than a month, was able to play well and in fact gained the respect of the audience. I see them like the Azkals playing against China," Olandesca said, referring to the gallant stand of the Azkals against the powerhouse China team during the Fifa Qatar World Cup Asian elimination competition held in Bacolod City last week.

And Olandesca sees the "never quit spirit" among the boys.

"They give their best no matter what. This team can give their opponents a run for their money just like the Azkals did when they earned one point in their scoreless draw against China," he said.

He also said their opponents should better watch out. "They have a lot of potential and everyone should watch out for them. This team holds a lot of promise."

in the Mindanao Cup. We will do everything to make Cagayan de Oro proud," he said.