Police chief to security forces: Do your job properly

"THIS is a very big event for us and we hope that we can perform to the expectation of the people of Bacolod and also to the guests of the MassKara Festival."

This was stressed by Police Regional Office (PRO)-Western Visayas Director Rene Pamuspusan Monday, October 21, during the send-off ceremony of a total of 2,074 security personnel, majority of them from the police, held at the Bacolod Government Center in Bacolod City to ensure the peace and order of the 40th MassKara Festival.

Pamuspusan said that PNP officer-in-charge Lieutenant General Archie Francisco Gamboa was also invited to attend the event, but because of the pressing activities in Camp Crame, he had to cancel his appointment in Negros Occidental.

"He was really the one who mentioned that he wanted to come here and he was very much willing to attend the send-off ceremony, unfortunately because of the pressing activities in Camp Crame, he was not able to come and he cancelled his appointment in Negros Occidental," he said.

Pamuspusan stressed that the send-off is really a very important event and that they have a very big thing to do in these events.

Pamuspusan noted that on Sunday, October 20, he attended their second command conference with PNP-OIC Gamboa at Camp Crame with the high level officers of the PNP.

"This is to mention his policy as the OIC of the PNP and to reiterate the desire of President Rodrigo Duterte that we need discipline in our organization. There's a pressing need to remind our people especially in the PNP that there's a need for discipline. I know that the President was dismayed because of the current issues, but with the guidance of our OIC we will assure our people, especially in Bacolod City that we are ready to render service and we are ready to show that our policemen in Bacolod and Western Visayas are disciplined and are up to the job," Pamuspusan said.

He said: "We will show our people that our policemen in Bacolod and Western Visayas are disciplined and I hope that they will show it during the festival from October 21 to 27. Please do your job properly, we know that you can, we expect that you will do it to the expectation not only of the regional director, but to the expectation of the people of Bacolod."

He added the city's security personnel also need the support of the civilians and other agencies of the government to ensure a peaceful MassKara Festival.

Binas said the send-off ceremony in the police tradition is given to the troops of the PNP to be deployed to the very important mission.

"We all know that we have very important mission to secure the 40th MassKara Festival. This is our mission and in line with this, allow me to remind all of you of our objectives that there must be no untoward or major incidents," he said.

He added they will ensure that there will be no high profile crimes such as bombings or any acts of terrorism, murder or kidnapping, and to reduce significantly the index crimes or the crimes against person or property such as theft, robbery, homicide, murder, physical injury.

Binas noted that since the opening of the MassKara Festival on October 7, there was no major incident reported or even slight injury within the city's festival site at the Bacolod Government Center, Public Plaza and Lacson Street as well as in Manokan Country area.

"I want to urge everyone to please help us and let's unite with each other to make MassKara 2019 a very peaceful one, and let us show to everybody and the whole world that indeed Bacolod City is the festival capital of the Philippines," Binas said.

For his part, Mayor Evelio Leonardia said that one of the keys of the success of the MassKara Festival is keeping the peace and order.

He said he is thankful to the regional director for attending the send-off ceremony.

"This is probably going to be our biggest MassKara Festival ever. MassKara has that distinction of probably being the only festival outside of Davao City which the President has attended for three consecutive times," he added. 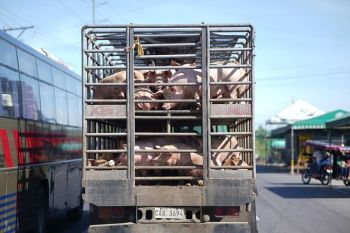