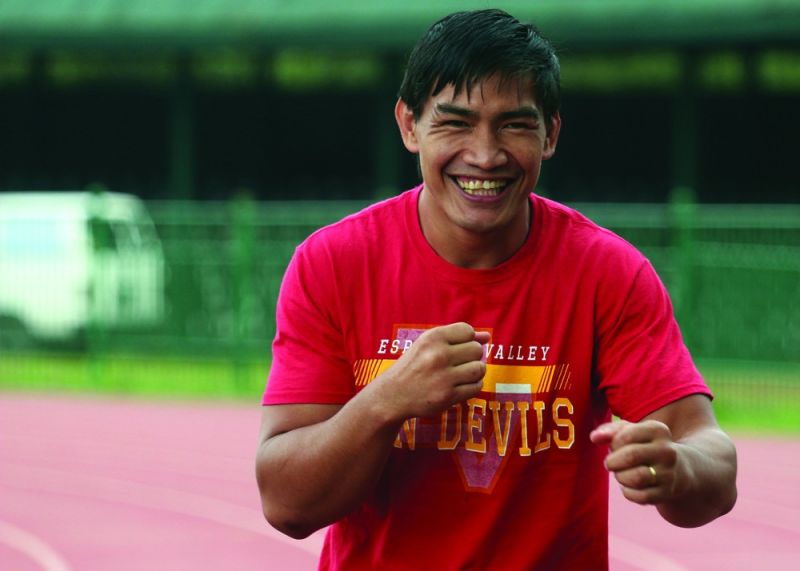 BAGUIO. Eduard Folayang belts out a huge smile while doing a morning workout in preparation for his upcoming bout November 8 at the Mall of Asia Arena. (Jean Nicole Cortes)

AFTER back to back losses, Eduard Folayang vowed to showcase more of their improved ground and wrestling in his return to the One Championship cage next month.

The former two-time ONE lightweight world champion will be the co-main event of ONE: Masters of Fate slated November 8 at the Mall of Asia Arena where he takes on MGL-1 FC lightweight champion Amarsanaa Tsogookhuu of Mongolia in the evening's co-main event.

The veteran from Team Lakay said he is wary of Tsogookhuu's uncharted power, as the Mongolian boasts of a solid knockout ratio featuring three stoppages out of five victories.

"I know he is not only a striker but he has also ground game basing on what I saw on his last fight," Folayang added.

In the main event, reigning ONE strawweight world champion Joshua Pacio of Team Lakay will defend his title against countryman Rene Catalan.

WBC and IPCC Muay Thai World Champion Alma Juniku of Australia is back in ONE Super Series action when she takes on Anne Line Hogstad of Norway in a Muay Thai atomweight contest in 4-ounce gloves. Juniku made her ONE Championship debut against Fairtex in June as she welcome ISKA Muay Thai World Champion and promotional newcomer Hogstad to the world's largest martial arts organization.

Former ONE strawweight world champion Yoshitaka Naito of Japan makes his much-awaited return to the ONE ring when he goes head-to-head with Thailand's Pongsiri Mitsatit.

Naito is on the comeback trail, having defeated fellow former ONE World Champion Alex Silva in his last outing.

Mitsatit is one of the fastest rising martial arts talents from Thailand with an impressive 10-3 record. He is also a Northern Muay Thai Champion of Thailand with a 72-17 record.

ONE said additional bouts for ONE: Masters of Fate will be announced at a later date.