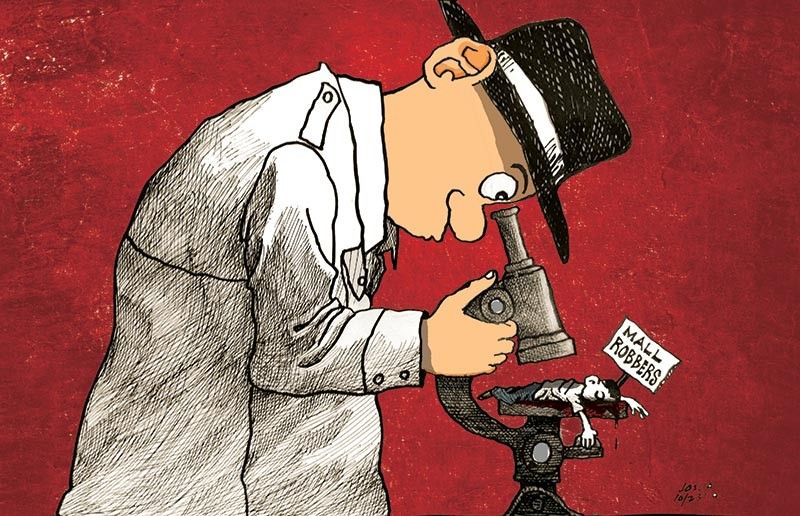 THE mall management does not arm its security guards. It does not allow firearms in mall premises to prevent shooting encounters. They will only put shoppers in danger. In fact, mall does not allow armed cops inside.

And then Oct. 19, 2019 came. A group of men efficiently swoops on four jewelry shops—Ginros Gem and Jewelry, ORO China Wedding and Engagement Ring, Mlhuillier Jewelers, Jay-Ann Jewelry—and money changer I Change Money Changer, inside the mall, breaking glass chests and hauling coffers with apparent deft and speed and carted away millions of pesos in jewelry and cash, the real worth of the loot still being verified as of press time.

The police break out into simultaneous operations, some of which ended with four suspects killed. Cebu Police Provincial Office Director Roderick Mariano promptly allayed fears of a rubout. The suspects tried to fight back, he said, one tried to grab a cop’s firearm, and were thus “neutralized” properly according to rules of engagement.

Mariano said they welcome the Commission on Human Rights’ investigation. They have nothing to hide, and the probe will give them chance to properly explain details of the pursuit, the arrests and the subsequent killing of some of the suspects.

Some of the suspects were arrested at the Polangbato Wharf in Bogo City. One identified getaway vehicle was found in Liloan town.

This recent heist has caused public anxiety, leaving a good number of questions in the mind of citizens. How to feel safe again in these public spaces? Was there failure of intelligence work? How can citizens help?

That this mad bunch, allegedly mostly from Ozamiz City, had the confidence and boldness to carry out a “practice,” a term one of the suspects used to describe their recent venture, in a busy mall, in a dense corner of a city, at the exact hour when the roads were choking in thick traffic, is an indirect mockery over the slack ways with which our cities carry their tasks of ensuring its denizens’ safety.

Good move by Mandaue City Mayor Jonas Cortes who convened right away the City Peace and Order Council and mall representatives to get to the bottom of things. Something needs to be done. We urge the cities’ chief executives and law enforcement agencies to consolidate their efforts in ensuring public safety.