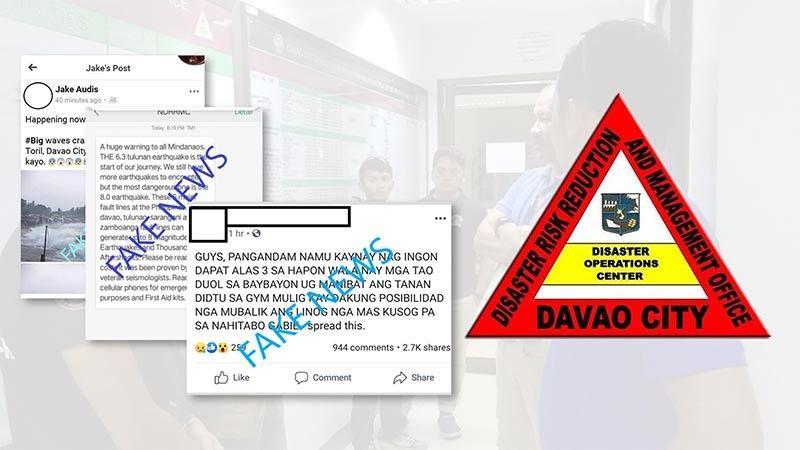 THE Davao City Disaster Risk Reduction and Management Office (CDDRMO) announced that they are monitoring some netizens who continuously post and share fake news regarding the possible occurrence of earthquake and tsunami in the city.

On October 15, a 6.3-magnitude earthquake rocked North Cotabato, which was felt by neighboring areas, including Davao City.

An hour after, hundreds of residents living in 16 coastal villages evacuated after being misled by false information, causing traffic in the downtown area. CDRRMO has since then been posting screenshots of individuals who posted false online post.

They are also encouraging the public to report individuals who are posting malicious advisories that can cause panic to the public.

CDRRMO training officer Lyndon Ancajas said their office is closely monitoring all social media platforms to prevent the prevalence of invalidated information, which could pose panic and harm to the public.

A screenshot of a text message allegedly came from NDRRMC, saying there is a possibility that a magnitude 8 would follow after the quake that hit last week, has been circulating online since last Sunday evening.

NDRRMC, in an issued statement, denied they had send such text message and called it a “hoax”.

The agency also said they are using a text account “NDRRMC”, and do not use any 11-digit format number.

Philippine Institute of Volcanology and Seismology (Phivolcs)-Davao Science Research Assistant Chris Vidad, however, clarified the probability that an earthquake higher than 6.3 will occur from the same source is low.

Ancajas, meanwhile, said NDRRMC and CDRRMO do not post advisories of a time frame of an earthquake as there is no instrument that could predict when an earthquake strikes.

He added that the public should be meticulous in validating text messages or any social media post before sharing it publicly.

CDDRMO operations officer Rodrigo Bustillo said in a previous report that they will not hesitate to file charges against individuals posting fake news online, adding that the public should not evacuate unless their office will be issuing an advisory. (RGL)