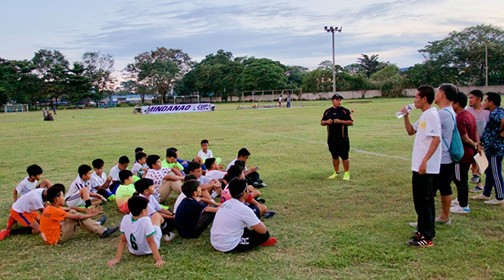 DAVAO. Davao booters listen to their coach in a pre-tourney briefing. (Contributed Photo)

DAVAO -- Grassroots football development in Mindanao gets a big boost when the Mindanao Cup Football Invitational tournament kicks off Wednesday morning (Oct. 23) at the Tionko field in Matina, Davao City.

According to coach and NOFA staff Reggie Dax Miraflor, the tournament is designed to discover new talents which can be nurtured later on to be members of the various Philippine youth teams. “We always look forward to players from Mindanao. They are tough brave and skilful,” he said.

Miraflor, who is also a many time coach of a number of Philippine National Youth teams in the past, also added that players from Mindanao are special.

“They could not be intimidated. They are also very strong. We are looking forward to discover many more in this competition,” he said.

Mindanao is indeed a bastion of football talents despite the lack of grassroots programs.

Just check the different football teams from the UAAP and NCAA and you can see many players from Mindanao.

The Mindanao Cup will certainly boost the grassroots development in this island.

All teams are expected to arrive today Oct. 22 at the Davao City National High School for the screening of all the players at 3:30-5:30 p.m. After the screening will be the match coordination meeting and the welcome dinner.