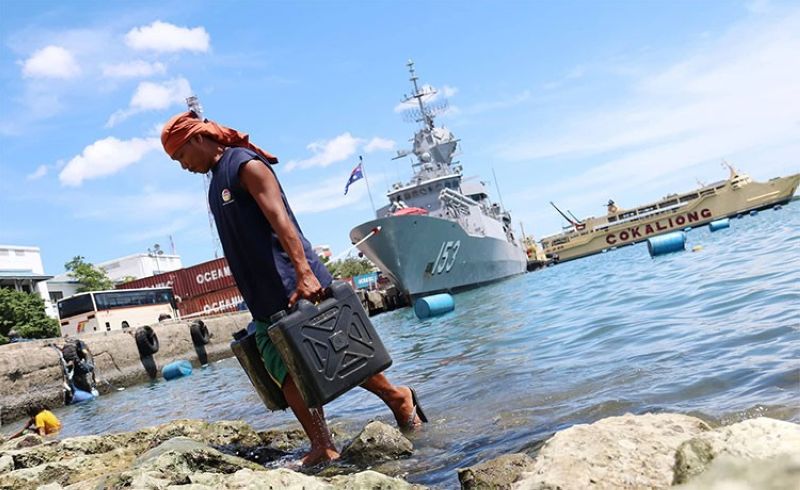 FOUR Royal Australian Navy (RAN) ships are currently in the country to continue engagement and cooperation, and to commemorate the 75th anniversary of the Leyte Gulf Landings and the Battle of Surigao Strait.

It is scheduled to join the HMAS Leeuwin, HMAS Sirius and HMAS Ararat in celebrating the Battle of Surigao Strait on Friday, Oct. 25.

The RAN also visited Leyte on Sunday, Oct. 20, for the celebration of the 75th Leyte Gulf Landings.

“The ship provided a backdrop in that special commemoration service. We also participated in the commemoration lunch,” Commanding Officer Luke Ryan of the HMAS Stuart said.

The Battle of Leyte Gulf off the islands of Leyte, Samar and Luzon from Oct. 23 to 26, 1944 between combined American and Australian forces and the Imperial Japanese Navy (IJN) is considered to have been the largest naval battle of World War II.

The Battle of Surigao Strait on Oct. 25, 1944 was fought as part of the Battle of Leyte Gulf.

Ryan said that out of the 192 crew members of the HMAS STUART, five have Filipino roots while two are Cebuanos.

Seaman Darren Cruz, 21, from Manila takes pride in working in its maritime logistics.

“It’s the first time after nine years that I get to visit the Philippines again. The (Australian navy crew) were very friendly and helpful. With the Philippines and Australia Navy’s joint operations, I feel I am of service to both countries,” he said.

The other Filipino crew members of the HMAS Stuart are Lieutenant Commander Marlowe Ricamora, a weapons engineering officer from Manila; Leading Seaman Joshua Lapatha, an aviation technician from Manila; Able Seaman (AB) Jayne Lawson, an avionics technician whose mother is from Cebu; and AB Mary Dibley, a medical officer who grew up in Malabuyoc, Cebu.

Ryan said Cebuanos have been friendly to them since they arrived on Monday. They are set to leave on Thursday, Oct. 24.

“It is our first visit here in Cebu. We had the opportunity to explore the heritage of Cebu and engage with the Cebuanos who are very friendly people,” he said.

The 17-year-old Stuart can counter simultaneous threats from aircraft, surface vessels and submarines. It can also carry a helicopter that has enhanced anti-submarine and anti-surface warfare and Search and Rescue capabilities. (WBS)