Mindanao’s storytelling in The Silent Witness 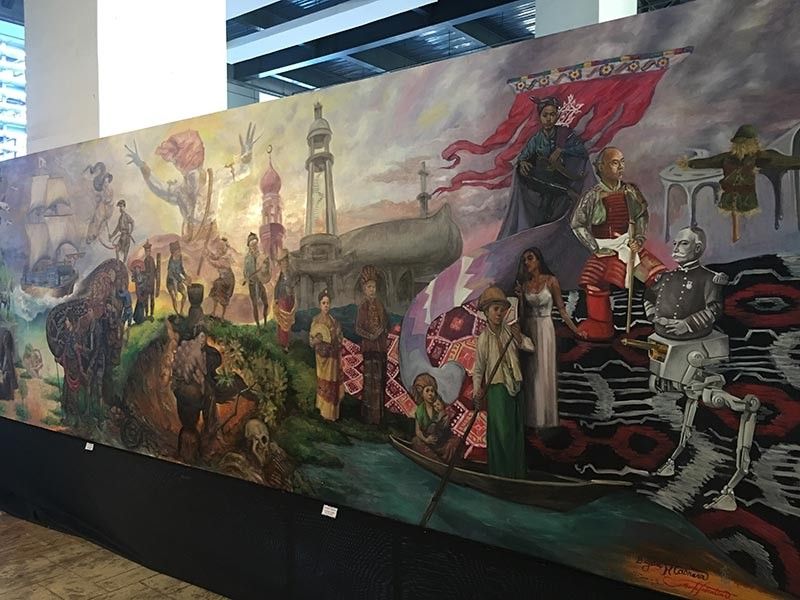 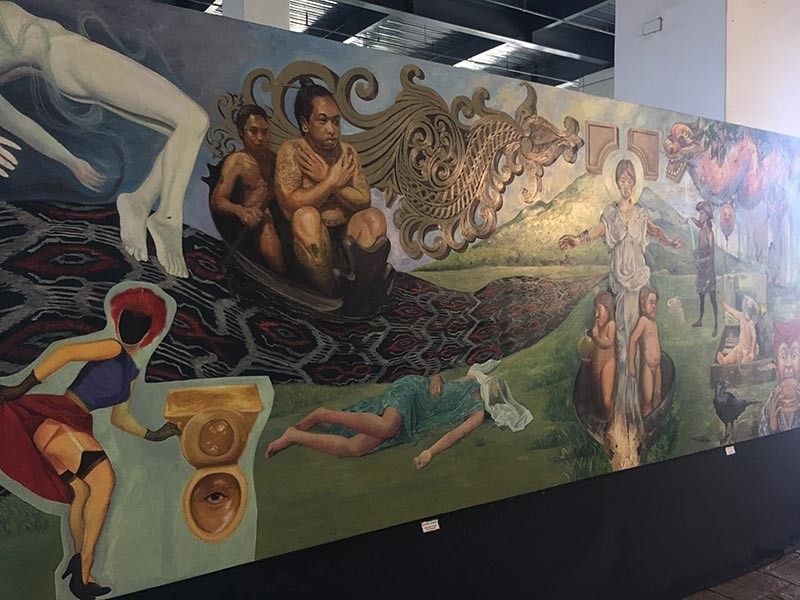 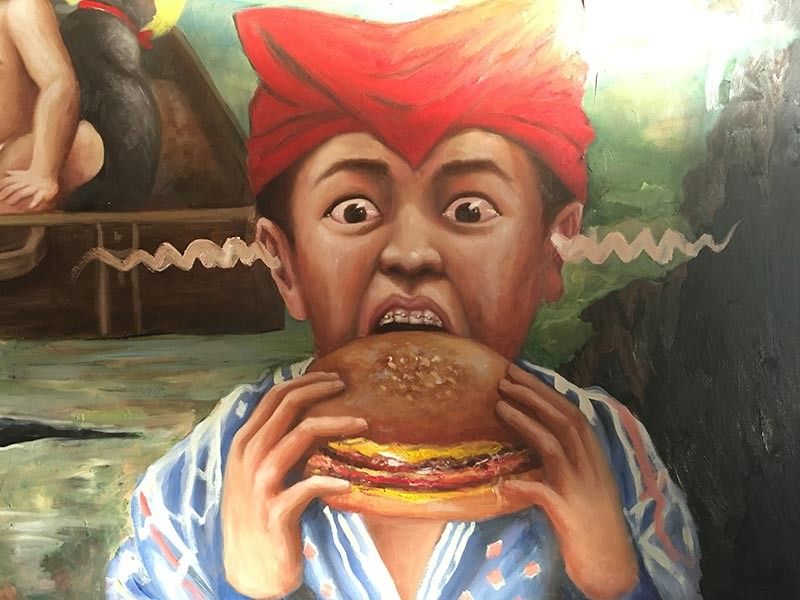 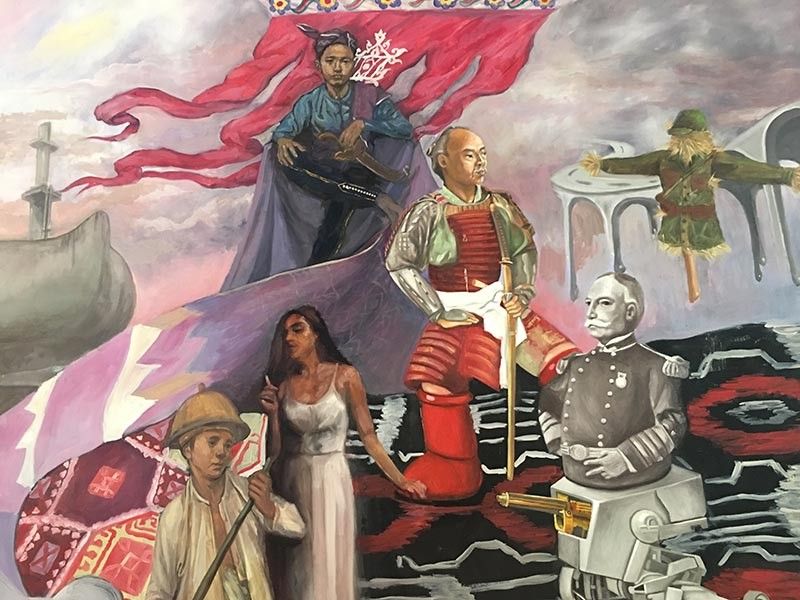 DAVAO. An American general has robot feet straight out of a Star Wars Movie. (Photo by Alaska Ordoña and Juan Genaro Halog/AdDU interns) 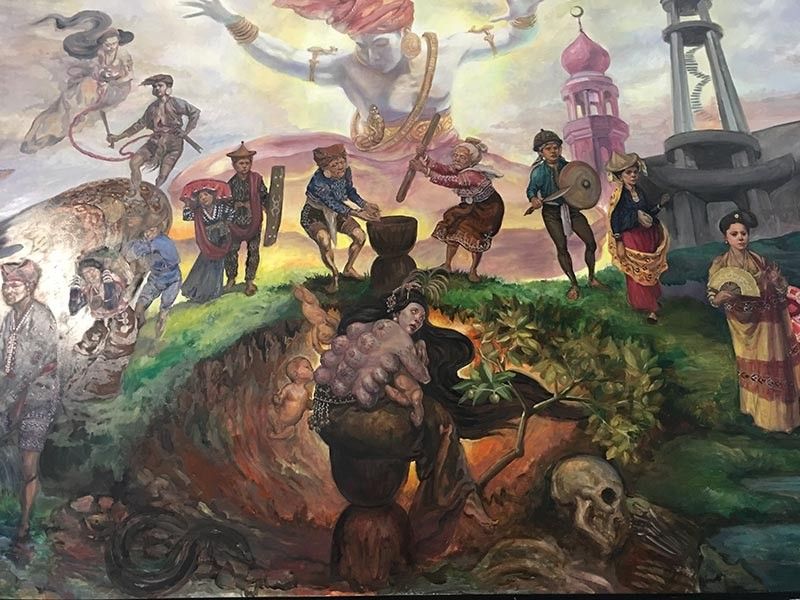 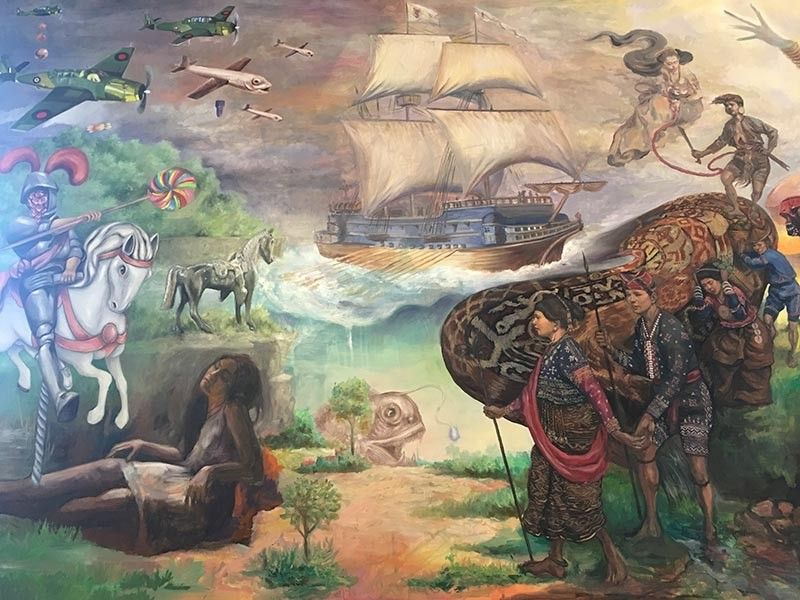 DAVAO. Fighter plane morphs into a giant fish, a conquistador rides a mechanical horse from a carousel. (Photo by Alaska Ordoña and Juan Genaro Halog/AdDU interns) 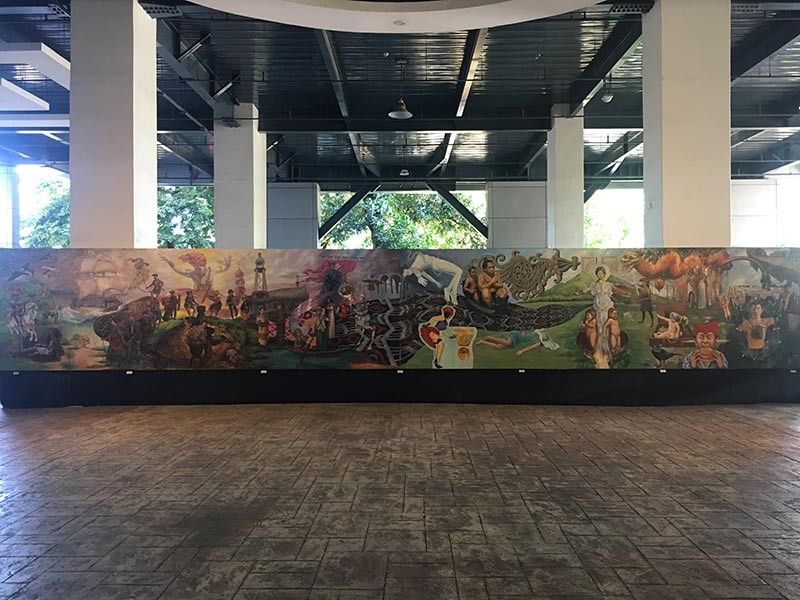 IT IS difficult to tell one story that embraces all of Mindanao. It is a land so big and wide, with differently lived realities that somehow belong with each other.

But what weaves Mindanao all together is the very thing that varies it: its diversity. Mindanao today is home to 18 indigenous tribes, Moros, Christians, and migrants from around the globe. The stories we live with every day are more varied than ever, making the land ever-growing in culture and history as time passes.

Inspired by the many ways Mindanao can be told in stories, Piguras Davao brought to life The Silent Witness, a two-panel oil on canvas painting. It is the Mindanao as we know, and as we have yet to understand in all its history and entirety.

Encapsulated in the mural painting “The Silent Witness” is an intense narrative that tells a story of the wide array of histories, desires, and beliefs in Mindanao. The mural painting entirely shows an indirect imagery of the past and the present: from the colonial figures, religious wars, its colonial influence, the symbolization of freedom, and societal conditions that are present today.

Nathan Gabriel Soriano, a pharmacy graduate of San Pedro College, stumbled upon the artwork in Gaisano Mall of Davao during its launching. He shared his sentiments about the painting, saying it’s about the story of the Philippines, starting from our ancestors until the present era where it has become scandalous and liberated.

“I believe the painting is focused more on the pop culture of the Philippines. You can see that genie-like figure who only the Filipinos believe in. I believe he’s called Manama. The painting also subtly includes the influence from other colonies, abortion, and rape,” Soriano said.

Mica Sultan, a 4th year Ateneo student, was lucky enough to chance upon an artist working on the canvas.

“The painting was very strange. At first I can’t describe what it is about. Luckily, the artist shared his ideas about the two dragons in the photo. The obvious one is a Chinese-style dragon while the one in front of it is a dragon made of okir. He called it Naga,” Mica said.

Vinci Bueza stated in the Exhibit Notes that the two dragons are symbols of the local meeting the global imaginaries. With Mindanao opening its doors to Asia’s influences, the painting’s symbolism bears witness to the powerful relations that coexist in socio-economic forces.

Mica was one of the many who were awed by the painting’s multiple imageries. Everywhere you look, there is something happening entirely in itself, often without connection to the rest of the painting.

“I find the Mebuyan god thought-provoking,” said Karl Maglana, a 4th year Ateneo student. “I am in awe of the unapologetic femininity she possesses. This painting made me wonder about her story since it’s been a long time since we last heard about her.”

With so much happening in Mindanao, art can truly be a means to remember the stories that we outlived. Mebuyan is an ancient underworld goddess of Bagobo and Manobo mythology, who has a hundred breasts that she nurses unborn babies with. Albeit morbid in nature, Mebuyan is a significant symbol, a reflection of the many ways the woman archetype holds an important place in the divinities of the tribes.

Corrie Gomez, a 4th year Mass Communication student, praises the painting for it doesn’t try to limit the storytelling of Mindanao to a certain cultural aesthetic.

“What I love most about the painting is it accepts that Mindanaoans are different. How we see Mindanao may be based mostly from the past, but it’s also good to acknowledge what it is currently today. After all, what’s happening now will soon be part of history,” Corrie said.

The painting of the Piguras Davao truly highlights the power of storytelling as memory-making. As Mindanao continuously grows and evolves, it’s all the more important to tell the stories that make us who we are. (Alaska Ordoña and Juan Genaro Halog/AdDU interns)