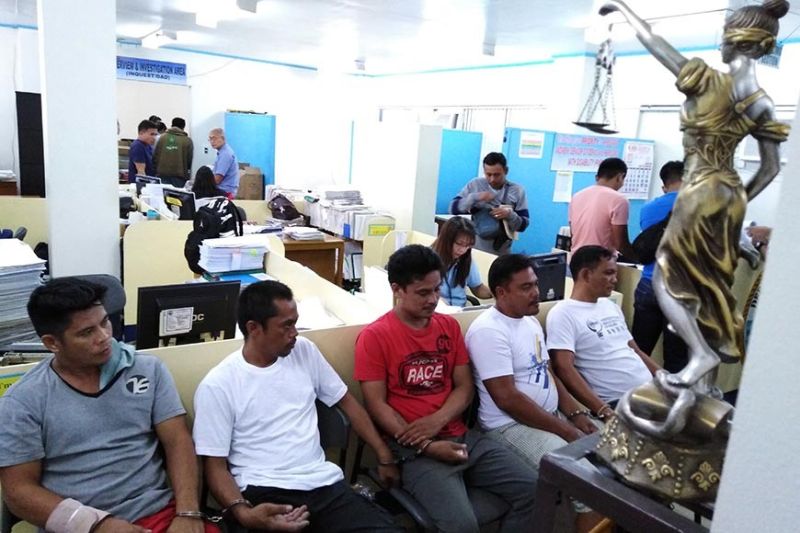 FIVE men who allegedly took part in a Mandaue City mall heist were charged with robbery on Wednesday, Oct. 23, 2019.

They are the respondents in the complaints filed by the Mandaue City Police Office (MCPO)-Investigation and Detective Management Branch (IDMB).

Cimafranca said he had been told to work as a driver for a trucking company in Cebu before the heist happened.

“After I arrived here, within two days, my job became different. Perhaps, I got forced into the situation. I regretted joining it because my bright future is now destroyed. If this did not happen, I could have found work abroad,” he said in Cebuano.

Robbery in band is committed when four or more persons take part in the heist.

Last Saturday, Oct. 19, the respondents were part of the 15-man group that robbed five shops—three jewelry stores, a pawnshop and a money changer booth—inside J Centre Mall in Mandaue City.

Four other suspects who were arrested died in an operation in Bogo City, northern Cebu, while five other suspects remain at large. Those who died in police custody were Wilfredo Enguito, Philip Faburada, Glen Gilberto Tairos and Geomark Hisuler Tayros.

In a notice to the public, the management of M Lhuillier Jewellers said it is willing to give a reward to whoever could give accurate information on the identity of the robbers.

“Any person who can give the company or the law enforcement agencies accurate information on the identity of the perpetrators that will lead to their successful apprehension, prosecution, and successful recovery of jewelry and cash will be given a reward of P500,000,” read a portion of the advisory.

Prosecutor Wilfredo Pangandoyon Jr., who handles the inquest proceeding, said he still has to evaluate the charges first and determine the arrest’s validity. (WBS)