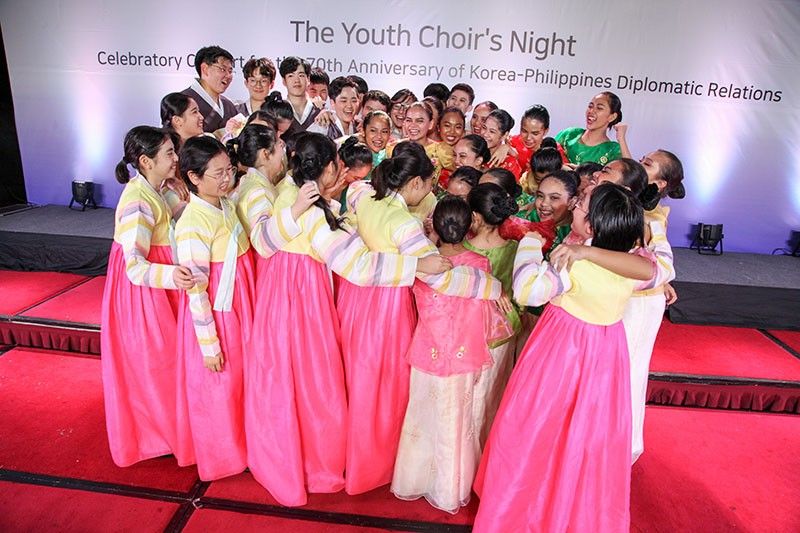 IN CELEBRATION of the 70th anniversary of diplomatic relations between the Philippines and Korea, the Consulate of the Republic of Korea collaborated with relevant institutions from Korea and the Philippines—with the support of the Korean government—to show both cultures through talent. Hence, the United Youth Choir.

Coming up with the choir, the Consulate of the Republic of Korea gave notice of an audition last May in Cebu. Twenty-three Filipinos vied for the chance to be a part of it. The Ministry of Foreign Affairs of the Republic of Korea in Seoul also selected 20 Korean members. Afterward, the Korean-Filipino Youth Choir members trained for three months, rehearsing every weekend in preparation for their string of performances beginning with The Youth Choir’s Night held at Marco Polo Plaza Hotel, Cebu last Oct. 3, guided by maestros Hak Yon Won and Dennis Gregory Sugarol.

Special guests Sisters of Mary School Handbell Ensemble welcomed the audience by performing “Blessed Assurance” by Phoebe P. Knape; “Theme From Love Story” by Francis Lai; and songs from “The Phantom of the Opera” by Andrew Lloyd Webber.

Both choirs performed during the second half of the show and sang together “I Have a Dream” by ABBA; “Oh Happy Day” from the movie “Sister Act 2”; “I Will” by The Beatles; “As Long As I Have Music” by Nancy Price and “You Raise Me Up” by Rolf Løvland. K-Arts Ensemble also performed “The Trout Quintet” or Piano Quintet in A major, Op. 114, D. 667.

For the final run, The Korean-Filipino United Youth Choir with K-Arts Ensemble performed “Sampaguita on the Arirang Hill” by Youngcho Lee and “Together” by Sungho Hwang.

The United Youth Choir performed on Oct. 6 at The Northwing Atrium, SM City Cebu and is set to perform on Oct. 29 at Sejong Center, Seoul, South Korea further bringing the two countries closer together.