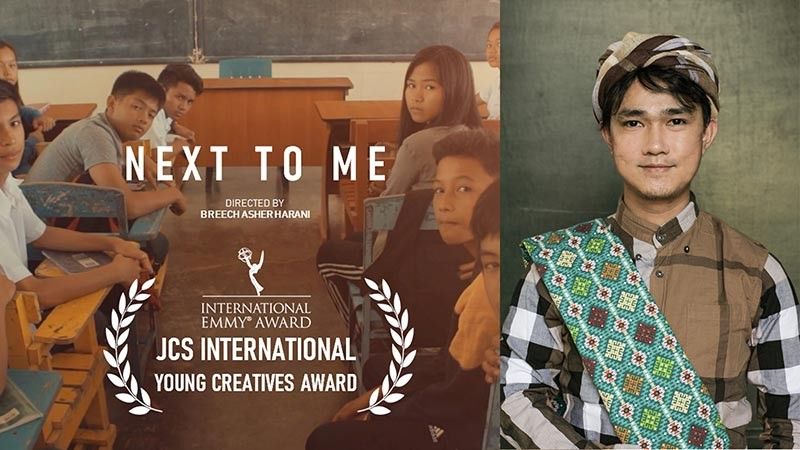 DABAWENYO advocacy filmmaker, Breech Asher Harani, was recognized in the International Emmy Award for his short film "Next To Me."

The one-minute film was selected as one of the three winners in the 2019 JCSI Young Creative Awards announced on October 1, 2019.

"It felt surreal at first because there were over 100 hopefuls for the award this year from all over the globe, then there were 26 of us left for the final nomination so being chosen as one of the top 3 most excellent films/videos is just unbelievable. European and Asian entries this year are amazing so being the only Asian to make it is even more incredible," he said.

His film, Next to Me, narrates about a displaced Muslim girl who suffers discrimination after transferring school in non-Muslim community.

"I know the narrative of bullying and discrimination exists in so many film projects across time but this particular story was founded specifically as a side angle of the Marawi War, which happened a few years ago," the 27-year-old filmmaker said.

The film was shot inside a classroom in Compostela National High School in Compostela Valley Province. He added the film's concept was a product from his 2018 conversation with a Marawi war survivor.

"I believe peace starts from the youth. If we don't educate them about the importance of tolerance and respect for other people's differences, we are molding a culture that develops hate which eventually causes conflicts," Harani said.

The 2019 JCSI Young Creative Award discovers, recognizes, and fosters young talent worldwide while creating a global conversation around peace. Entries submitted to the award-giving body revolving around this year's theme, "Stand Up For Peace."

Harani will personally receive his award on November 23, 2019 at The International Emmy(r) World Television Festival in New York City. Harani will be awarded alongside two other winners: United Kingdom's Funke Alafiatayo for "P.E.A.C.E. - A Spoken Word" and Albania's Artes Ferruni for "It Starts Within."

Moreover, here's a question and answer portion with the award-winning filmmaker:

Q: What do you think will be the impact of your Emmy win to the peace situation in Mindanao especially Marawi?

A: I believe the impact will be huge. I've been an advocacy filmmaker for seven years now. I've made films about migration, climate change, gender parity, and many more. You see, when you screen these films in international platforms like festivals, forums, and conferences, you bring a bit of your country to them and you educate them about situations that they are not aware. This creates discussion among youth leaders, global ambassadors, policy makers, and government bodies so that they can craft solutions. When the Academy saw "Next To Me," I believe it gave them an idea as to the situation during and after the war in Marawi. JCS International is a global media company and partnering with the Academy of Television Arts and Sciences allows us to reach the right people and inspire leaders so that solutions for problems like this will be created and situations like this will be deterred in the workforce, in schools, and in communities as a whole. The discussion about Marawi in the international scale is very limited on the terrorism and the war itself, so giving them a different angle from a child's perspective makes the discussion even more meaningful.

Q: After winning an Emmy, what makes you busy right now?

A: After the Emmy, I actually have multiple invitations for an arts residency in Europe for 2020 but I have no decision yet if I'll pursue it or just continue making films and artworks in the Philippines. We'll see. I'm the kind of person that doesn't really plan my life ahead because I end up disappointed with my expectations. So I just go with the flow wherever the water takes me.

Q: What is your vision/dream for the Philippine film industry?

A: I wish the Filipino audience will be more open for independent productions. I also hope our government will be more supportive of our filmmakers and artists just like how supportive they are with our athletes and pageant queens. Every time I attend international events or exhibit my works abroad, I see filmmakers and artists proudly supported by their governments and I get jealous sometimes. But there is still hope.