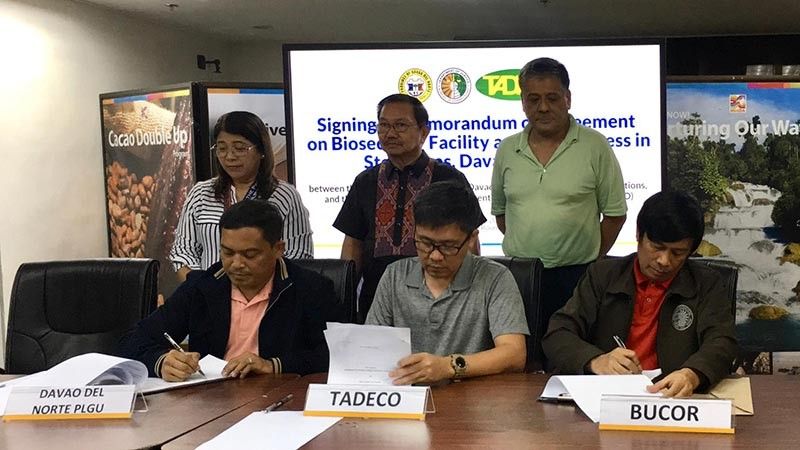 With the help of the Mindanao Development Authority (Minda), the parties arrived to an agreement retaining the biosecurity facility in the Tadeco plantation while maintaining the accessibility of the contested roads for the public.

Meanwhile, Tadeco pledged to ensure its full and unimpeded passage of vehicles and persons through these areas by not requiring gate passes or identification cards. They will also refrain from erecting additional structures that would unduly obstruct the access of the people on any portion of the concerned roads.

The agreement also called for the formation of a Joint Monitoring Committee that will be composed of two representatives from the Davao del Norte Provincial Government Unit, Bucor, and Tadeco to "ensure faithful compliance of the responsibilities of the Parties."

The MOA also served as a complete settlement of the civil case filed by Tadeco and Bucor against Jubahib at the Panabo City Regional Trial Court.

On October 9, the Provincial Government allegedly attempted to dismantle the biosecurity facilities of the banana plantation as part of its road clearing operations.

Jubahib said through the meetings conducted leading to the crafting of the MOA, he was able to relay his concerns to the officials of Tadeco and Bucor.

"At least, nasabtan karon sa management sa Tadeco ug sa Bucor nga ang concern nato is ang pag-agi lang gyud sa mga tao (At least, the management of Tadeco and Bucor understood that my concern is about the road access of the people)," he said.

He added: "Concern sab ko nga kinahanglan iretain nato and biosecurity [facilities] tungod kinahanglan nga suportahan sab nato kay dako nig income nga gihatag dili lang sa probinsiya, kundili sa atong nasud (It is also our concern to retain the biosecurity facilities because we need to support it since the plantation is generating income not only for our province but for our country)."

Jubahib said the province will also allot a budget for the concreting of the roads.

Vadil said he thanked Jubahib for understanding their purpose of putting up the facilities, which is to prevent the spread of Fusarium wilt or Panama Disease at the banana plantations.

"What happened here a compromise agreement is a win for all, a win for peaceful negotiations," he said.

He admitted the conflict erupted due to the failure of the parties to sit and discuss the issues.

"If we only sat down and talked about the issues then we can settle things and set politics aside," said Vadil.

Minda chair Emmanuel Piñol, who led the mediation process, said they were able to settle the conflict smoothly.

"Of course, there were some contentious issues which were discussed but at the end of the day all parties realized that what we are doing is actually for the good of everybody," Piñol added.