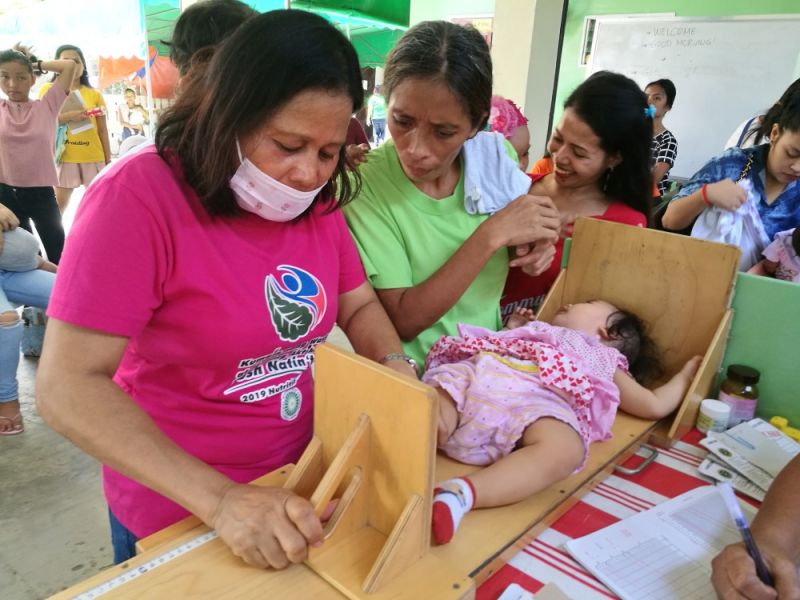 DAVAO. A barangay health worker measures the height of the baby as a requirement for immunization at the health center in Barangay Tibungco, Davao City. The health center also practices a family-friendly environment inside their facility for the parents to enjoy bringing their children to the center. (Mark Perandos)

DESPITE vaccination scares, Dabawenyos have become more accepting of having their children vaccinated, after 60 barangays in Davao City went beyond their target immunization coverage of the first round of the poliovirus vaccine mass immunization, according to a City Health Office (CHO) data.

District B of the first district, composed of Barangays 11-B to 20-B, has the lowest coverage rate with 62.2 percent, which means more than half of the eligible population still had been immunized.

Overall, the city has reached a total immunization rate of 85.9 percent.

She said the city's vaccination coverage reaching almost a hundred percent is "very good news" on its effort to prevent poliovirus from spreading in the city.

"I am expecting that all hard work that is being put into polio vaccination in all district health centers that by the time we finish the 'round zero' on October 27, we would have achieve 100 percent," Villafuerte said during her privilege speech.

Meanwhile, the committee on health chair called on the second district councilors to "help their jurisdiction so they can achieve 100-percent coverage for all."

Villafuerte also passed a resolution urging all parents to submit their children to the three-round mass immunization.

Meanwhile, the first batch of the mass vaccination will end on October 27.

In September, CHO confirmed that the poliovirus detected was from a water sample sourced from the Davao River near the Bolton Bridge area. This report alarmed health officials, as it poses risk for the children who are not yet immunized or have not yet completed their immunization against this crippling and fatal disease.