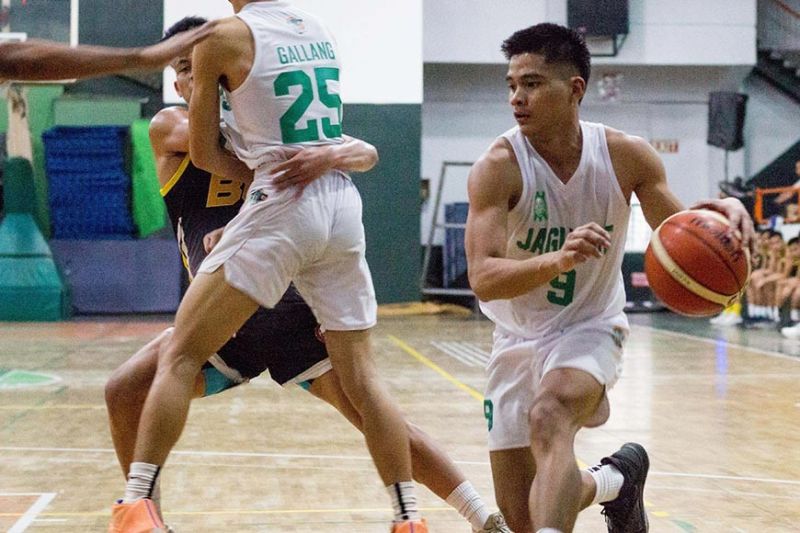 BAGUIO. Jerome Alberto Meamo steps up for the Jaguars as they seek a final four appearance in this year’s men's basketball of the Baguio - Benguet Educational Athletic League season 33. (Photo by Jean Nicole Cortes)

With score tied at 43 with 4:12 remaining in the third quarter, Justin Paul Madriaga and Arjay Jan Gonzales conspired during the final four minutes of the period to claim their fifth victory in as many games, 69–64, against the University of the Cordilleras (UC) in the ongoing eliminations round last weekend at the SLU Prince Bernhard Gym.

Madriaga led the Navigators with 21 points including a triple when the Jaguars came within five in the final three minutes of the ball game while Gonzales came up with clutch a basket down to stretch to seal the victory, finishing the ball game with 15 markers.

SLU and UC fought tooth and nail early in the ball game as raced to a 17–19 lead at the end of the first quarter after trailing by four midway in the opening canto.

Navigators Jed Aione Barrientos and Gerr Patrick Martinez kept SLU within striking distance in the second period and enjoyed a five point 37–32 advantage going into the half time break.

The Jaguars then caught up with SLU tying the ball game at 43 all, 4:12 in the third frame with Chester Elefante and Lydon Matbagan leading the charge.

SLU then made huge stops after the other as the Jaguars went scoreless and stare at a 57–43 deficit going into the pay-off period.

The Jaguars came within five, 67–62, with 2:03 remaining but their efforts were not enough as SLU thwarted any comeback and suffer their first defeat in four games.

Barrientos and Martinez had 10 each for SLU as the Navigators out rebounded UC, 29-27.

The Jaguars however bounced back later this week for their fourth win in five starts handing season host Cordillera Career Development College Admirals their second defeat in five games, 92-85, Sunday afternoon at the UB gym.

Defending champion University of Baguio Cardinals and SLU are tied at the top with identical 5-0 record with UC and CCDC holding on to the third and fourth spot respectively.

Baguio College of Technology Atoms currently stands idle at fifth with a 3-3 record.

Sitting at the bottom of the team standings is Benguet State University Wildcats who has yet to win a ball game in five starts.