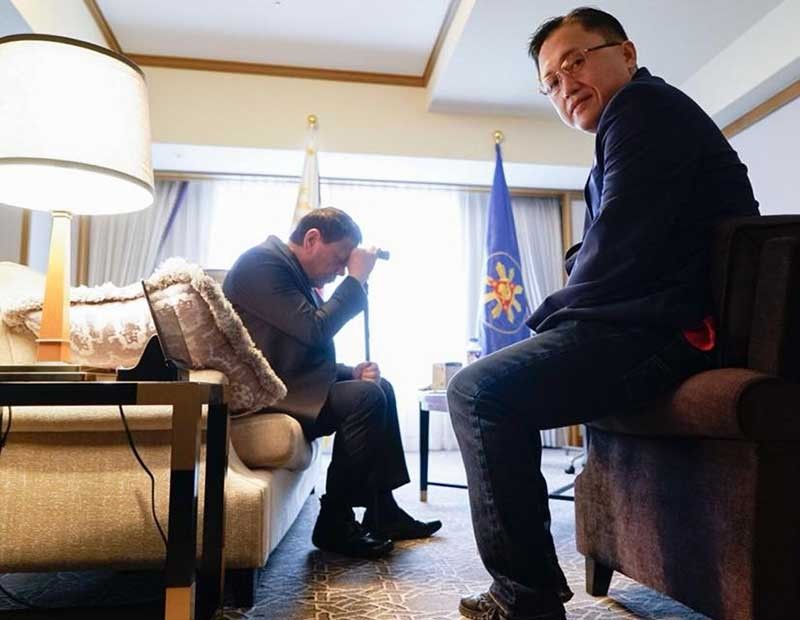 JAPAN. President Rodrigo Duterte is shown here with a cane during his trip to Japan. With him is Senator Christopher Go, his former aide. (Photo from Bong Go Facebook)

A DAY after his consultation with his neurologist, President Rodrigo Duterte is feeling “much better,” Malacañang said on Thursday, October 24.

Presidential Spokesperson Salvador Panelo said the public need not worry about the health of Duterte since the doctor already found that the President is merely experiencing “muscle spasms.”

“The President is presently feeling much better,” Panelo said in a statement.

Duterte, 74, had to cut short his trip to Japan, where he attended the enthronement ceremony for Emperor Naruhito on Tuesday, October 22, because of “unbearable” pain in his lower back.

Panelo said Duterte’s neurologist has ruled out any surgical procedure for the President.

He said the doctor merely advised Duterte to take medicines to “relieve the pain" caused by spasm, which could possibly have been aggravated by past motorcycle accidents, including the one that happened on October 16.

“The President underwent a magnetic resonance imaging (MRI) and medical evaluation yesterday. He was diagnosed to be having muscle spasms causing what he described to be an unbearable pain at the pelvic and spinal area of his body,” the Palace official said.

“His doctor ruled out any surgical procedure for the President,” he added.

Panelo said the President was also told to “rest for a couple of days and limit his physical activity, particularly avoiding standing or walking for long duration.”

“Despite the limited physical activity that he has to impose on himself, the President will meet Chinese Vice Premier Hu Chunhua today (October 24) to discuss, among others, certain infrastructure projects in the country which are financed by China,” Panelo said.

Panelo added that the President would continue performing his presidential duties, which include attending to “local and foreign engagements in the following days.” (NASE/SunStar Philippines)