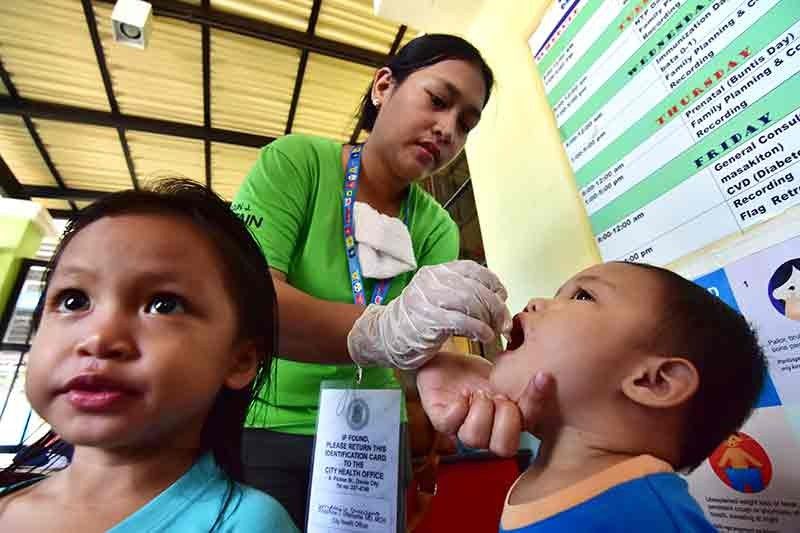 THREE days before the end of the first round of the poliovirus vaccine mass immunization, the Davao City Health Office (CHO) has recorded 95.6 percent immunization coverage or a total of 178,577 children have been vaccinated, making all the children in the city "shielded" from poliovirus.

CHO technical division chief Julinda Acosta said despite not reaching a 100 percent rating, the figure already guarantees the protection of the children from the possible virus infection.

"As long as we would reach more than 95 percent, magkakaroon na tayo ng 'herd' or 'community immunity.' At least, kadtong mga wala pa ma-immunized, matagaan na sila og 'shield' or maprotektahan na sila because of that 'population immunity' (We will be able to have a 'herd' or 'community immunity.' At least, those who have not been immunized will be given a 'shield' or protection brought by the 'population immunity')," Acosta said Thursday, October 24, during the iSpeak media forum at the City Hall of Davao.

She said, however, thtt the figure is still partial data as some health centers have not yet forwarded their reports to the CHO due to its ongoing validation.

CHO, in partnership with the Department of Health (DOH) and the World Health Organization (WHO), started the first citywide mass vaccination called the Sabayang Patak Kontra Polio in October 14 and will end on October 27.

Under the immunization activity, health officials and workers are rolling out the oral polio vaccine type 2 (OPV2) to 186,864 individuals from zero to 59 months old.

Based on the CHO data, the Third District has the highest immunization coverage with 103.8 percent, followed by the First District with 92.6 percent, with Second District the lowest with 89.7 percent.

Acosta said most of the geographically isolated and disadvantaged areas (Gida) such as Baguio, Marilog and Paquibato had reached more than 100 percent immunization coverage in their respective areas.

She added that those areas within the Poblacion District that have a lower coverage percentage still covered more than half of the total population.

"Basin tong mga batang aanaa aning mga areas kay namalhin na sa laing lugar, because kaning atong projected target number kay gibase nato kini sa Philippine Statistics Authority (PSA) (Based on our observation, maybe some of these children in the areas where lower immunization coverage was observed have migrated to other parts of the city, because our projected target number is based on the statistics provided by the PSA)," Acosta said.

The health official, however, said parents refusing to have their children immunized brought by the Dengvaxia scare and religious belief remain to be one of their greatest challenges in their activity.

She also said there are some parents who refused to avail themselves of the free vaccines because they believe it is only intended for the "less privileged" and they have their own private pediatricians who could provide vaccination to their children.

"This mass vaccination is for all children, regardless of economic or social status. Even the rich should participate," Acosta said.

She also said there are some indigenous peoples who refuse to have their children vaccinated because they thought "this is one way of exterminating their race." She, however, said there were only a few of them and their office is confident that they will be able to convince the Lumad people later.

Acosta added the CHO health workers are also reaching out to some private subdivisions, revealing that they are communicating with a subdivision's homeowners' association after they were refused to let in.

Meanwhile, she said those children who were not able to avail of the OPV2 in the first round can still avail it in the coming rounds.

While she said the CHO is still drafting a policy requiring all parents to have their children vaccinate, she said they cannot force them as it is their right.

Acosta, however, is hopeful that a 100 percent total immunization coverage will be reached as the city is non-stop in providing information dissemination in all areas.

In September, the CHO confirmed that the poliovirus detected was from a water sample sourced from the Davao River near the Bolton Bridge area.

This resulted in the conducting of the citywide mass immunization.