The rise of true champs 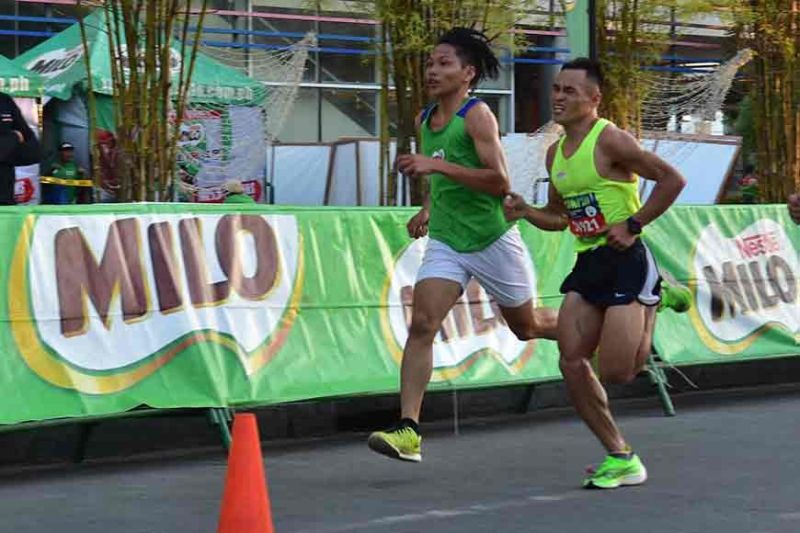 A CHAMPION is made not born. So goes the famous quote from NBA’s greatest player of all time, Michael Jordan.

Arlan Arbois, Jr., the second of four children of Arlan Arbois, Sr., who tills their corn and vegetable farm in Tupi, South Cotabato and Genalyn, who has a small sari-sari store at home, also attested to this when he checked in at one hour, 11 minutes and 52 seconds to crown himself 42nd National Milo Marathon Davao Leg men’s 21K champion on October 20 at SM Lanang Premier car park in Davao City despite sore leg muscles that slowed him down in the last two kilometers.

(The route has uphill and downhill portions coming from the turning point SM Ecoland. I slowed down going to SPMC. The road was not flat especially at the flyover. In the last 2K, my legs were failing me but I just pushed myself to finish to still come out first. I’m thankful God gave me strength)

The Davao edition was the second Milo 21K title for 22-year-old Rizal Memorial Colleges (RMC) varsity trackster. He also won in the 2018 General Santos City leg with a time of 1:12:30. Thus, shattering his own personal best record was indeed a bonus as well as qualifying for the national finals in January 2020. He also qualified in the Milo nationals last year yet he cited the lack of preparations and being sick for about a week after topping the race in General Santos hurt his chances.

But who would ever think that a decorated runner like him now had to hop from one college to another while pursuing a tertiary education. At age 16, he started to experience a string of heartbreaks.

“I only had one semester at Brokenshire since the scholarship was cancelled then I went to study in Pampanga for another semester but a similar thing happened and so I transferred to Cor Jesu College but unfortunately our team was disbanded since we haven’t been winning medals,” he recalled in the vernacular, also sharing the painful memory of him going through days of training with just bread and coffee to live by and that he joined every fun run he could get his hands on with the hope of winning prize money for his daily school allowance. But since he still was not yet ready to race in longer distances, he only started joining short distance runs that offer lesser prize money. “It was okay though as long as I have something to help me get by and sustain my school needs so I didn’t need to burden my parents,” he said.

Coach Charlie Hifarva recruited him to join the RMC athletics varsity squad after learning what befell him in Digos City.

“It was very tough but I never gave up,” he said.

Running took most part of his growing up years in Tupi. He would run an average of eight kilometers and walk another eight kilometers a day on a rocky and steep path when he was attending classes at Miasong National High School. It was only in high school that he seriously pursued running as a sport. In his elementary years, he walked his way to Miasong Elementary School for a daily total of 10 kilometers. The latter is farther from their house than Miasong NHS. He eventually made his way to qualifying in the Palarong Pambansa during his senior year but he failed to reach a podium finish.

However, the greatest gold he could give his parents, according to him, is a college diploma, which he will soon achieve as he is already on his senior year in Criminology. But landing a spot in the national track and field team - to represent and give honor to the country, is his greatest dream as an athlete, if that could somehow help him lift his family, the source of his joy and inspiration, out of poverty.

Heart of a champion

Just like Arlan, Divine Grace V. Nopal of Mati City and Aaron Gumban of Davao del Norte exuded the heart of a real champion after finishing first and second, respectively, in their respective events.

Divine, 12, an eighth grader from Mati Comprehensive National High School (MCNHS), could not believe topping the female 3K category as it was her first time to join the Milo race with the urging of her coach and funding support from the Mati city government.

The youngest of three siblings, with longing in her eyes, said in the dialect, “This championship is for my mother because she has been supporting us, I miss her.” Her mom is an overseas Filipino worker in Malaysia for the past five years and she only gets to reunite with her family every December. Her father is a tricycle driver.

Divine, who has been into running since 10, once joined the Davraa Meet but lost. Still, it was not enough to discourage her from racing again as she was among those who took the spotlight from over 9,000 runners in the Davao return of the annual Milo event.

Aaron, for his part, shrugged off his runner-up finish in male 5K. “I’m happy because I didn’t expect to place second,” he beamed, considering that the 5K category had about 8,400 participants. The 15-year-old Davraa Meet 2019 champion, a Grade 9 student of Sto. Tomas National High School, however, was resolved to come back again next year to try his luck and get another shot for the title. His never-say-die determination, which could not be stopped by a setback, makes him a true champion.

Arlan, Divine and Aaron are but few of a host of Milo runners over the past 42 years whose exploits were achieved after hurdling challenges on and off the race course.