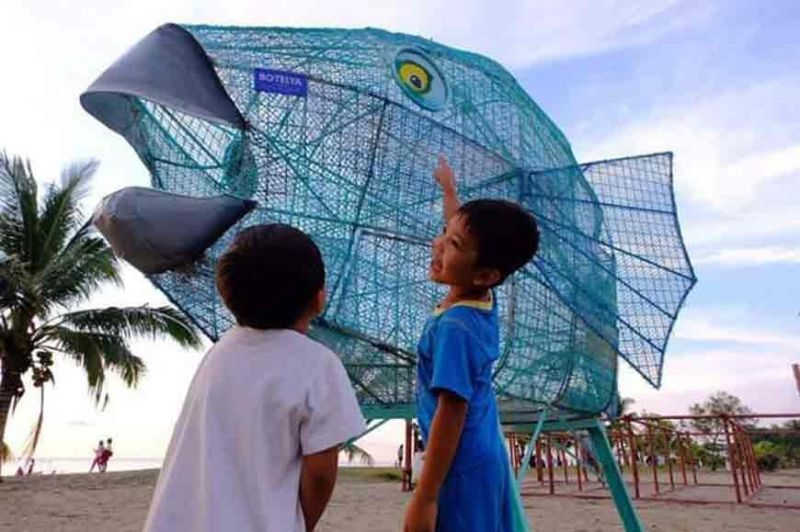 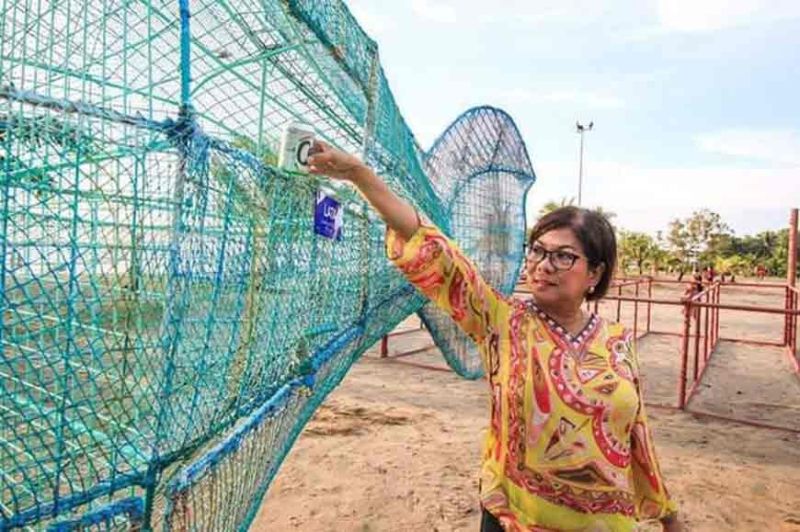 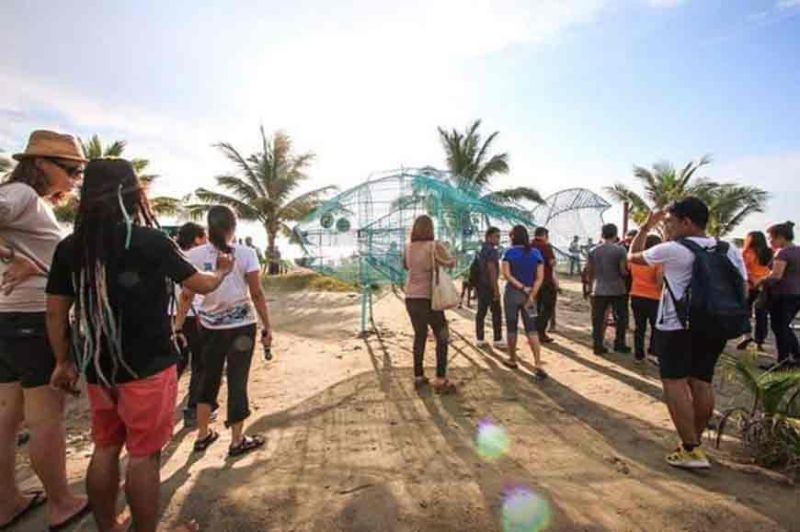 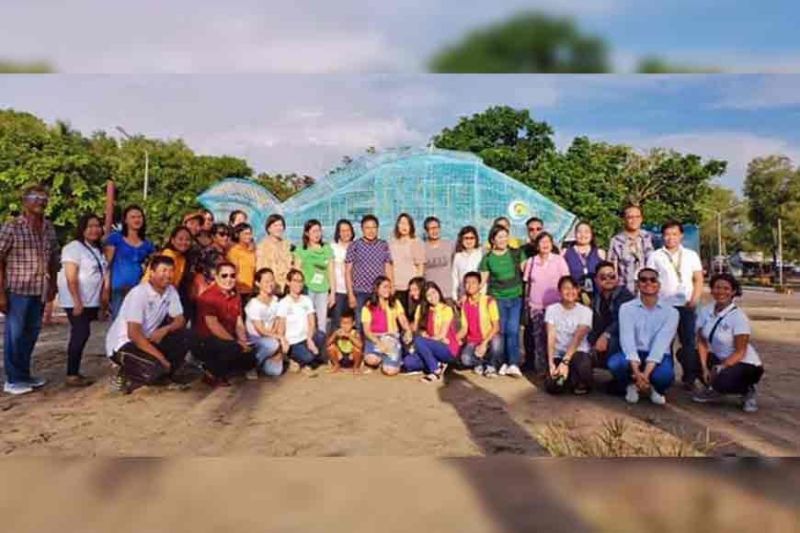 SIPALAY CITY. The Sweep team with the local government officials and people of Sipalay City. (Photo by Aeson Baldevia) 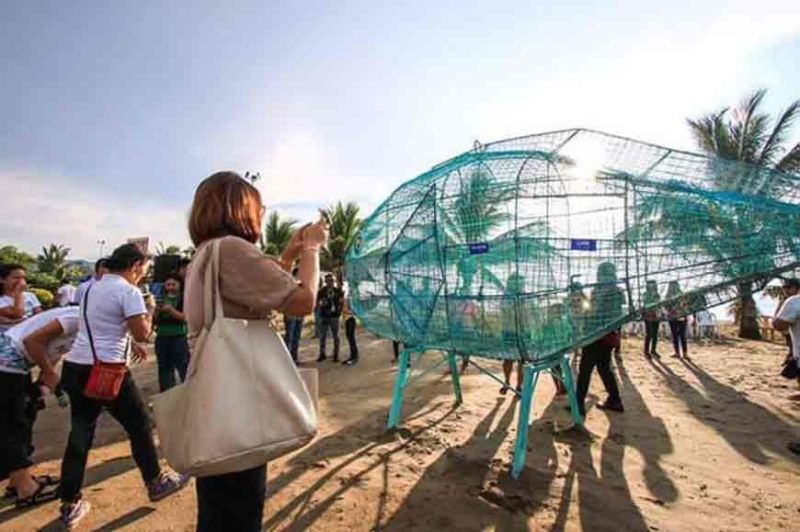 SIPALAY CITY. Sipalaynons support the cause. (Photo by Aeson Baldevia) 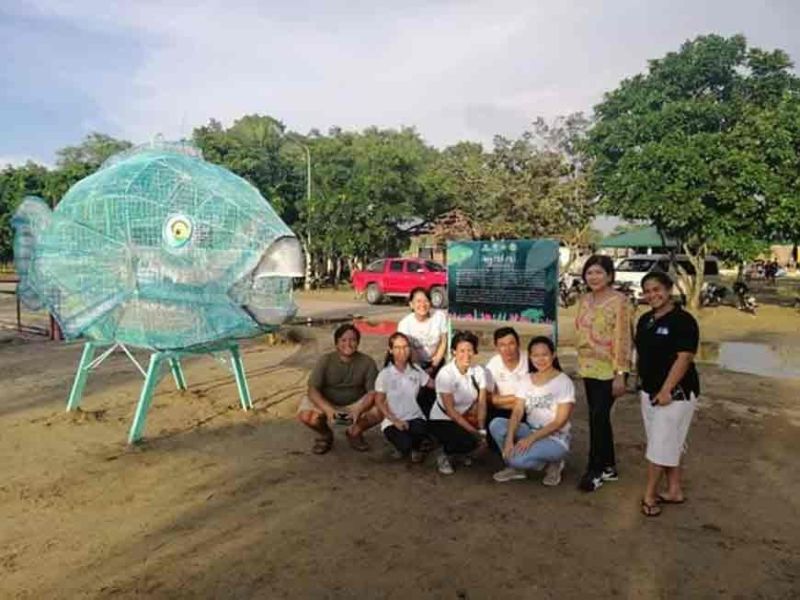 A SIX-FOOT-TALL art installation in the form of a parrotfish was unveiled at the Sipalay City public beach on Wednesday, October 23.

Dubbed “Ang Mol-Mol” (local name for parrotfish), it symbolizes the ecological role of parrotfish species in coral reef ecosystems, and it functions as an educational recycling bin for three kinds of recyclables such as plastic, tin or aluminum, and glass.

Mayor Gina Montilla Lizares received the recycling bin in a turnover ceremony with PRRCFI represented by one of its trustees, Kaila Ledesma Trebol, and project staff.

In the last two years, PRRCFI has partnered with local government units (LGUs) in the Southern Negros Marine Key Biodiversity Area to reduce the flow of plastic waste to the ocean through project SWEEP: Sea Waste Education to Eradicate Plastic.

The project is under the Municipal Waste Recycling Program funded by the United States Agency for International Development (USAID).

The USAID administers the US foreign assistance program providing economic and humanitarian assistance in more than 80 countries worldwide.

“I hope the people of Sipalay will use this and learn about the value of ‘mol-mol’ in the ecosystem,” Lizares said in front of locals who gathered during the unveiling ceremony.

She also encouraged not to fish out parrotfish as they are valuable in marine biodiversity and sustainable tourism, on which the city depends on.

According to the signboard that came with the recycling bin, the parrotfish installation is an educational and functional symbol.

It will collect recyclable materials, to be put back into a circular economy instead of them ending up as waste in nature or the oceans, and affecting lives not just of marine animals but also of us humans.

It is hoped that the installation inspires locals and tourists to keep the beaches of Sipalay clean.

The parrotfish (mol-mol) plays an important role in coral reef ecosystems by clearing off excess algae and dead corals to stimulate growth and overall health of the reefs.

Its distinct beak like that of a parrot, and its tightly packed teeth, allows it to graze, scrape and grind up corals, which after digestion are “pooped” as sand that are vital to marine habitats.

There are about 95 species of parrotfishes in the family Scaridae, and each one of them contribute to biodiversity and ecological benefits, such as returning to the environment what they have consumed.