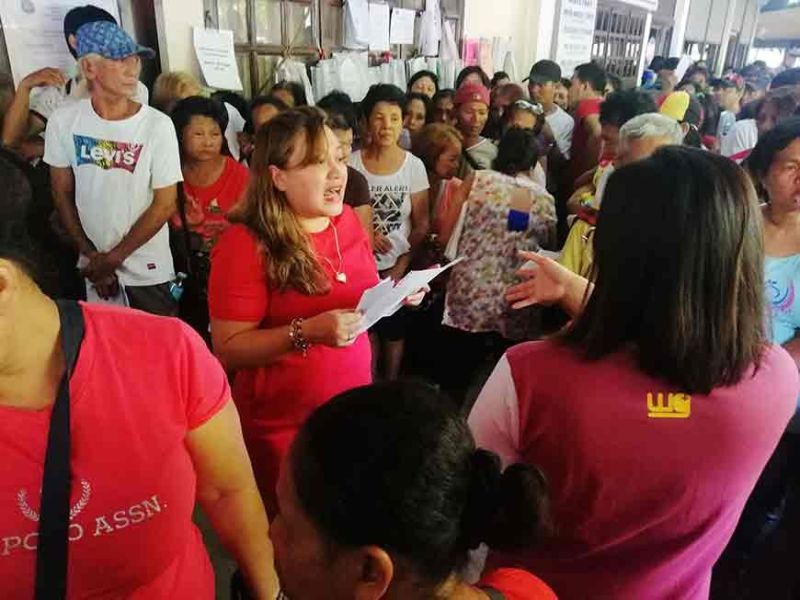 THINKING that a voter's registration certification is a requirement in claiming financial gifts from government officials, Dabawenyos of all ages, not only senior citizens, flocked to the Commission on Elections (Comelec) office in Davao City anew.

An influx of individuals from different parts of the city surprised the Comelec office on Magsaysay Park Friday, October 25.

The office has been receiving more than 1,000 senior citizens per day since last week although barangay elections had ended on September 30.

Comelec Davao City spokesperson Krisna Caballero said the number further increased even after Councilors Wilberto Al-ag and Ralph Abella, proponents of the ordinance, personally went to the office to clarify that the voter's registration is not part of the requirements for the annual pension, which is still under second reading in the City Council.

Caballero said she was also surprised to see young adults and middle-aged individuals who went to the office.

She said based on her initial talks with the people who flocked to their office, the vice mayor will be providing "financial gifts" this December, and that voter's certification is one of the requirements.

When interviewed by SunStar Davao, Emmanuel, 57, a resident of Calinan District, said he was already at the Comelec-Davao City at 6 a.m. to claim his voter's certificate after his neighbor relayed to him the night before that they received a text message supposedly coming from the Vice Mayor's Office, informing them that the vice mayor will be giving financial gifts this Christmas.

A certain Annabelle, 23, a resident of Isla Verde in Barangay 23-C, said she has no idea as to the purpose of claiming her voter's certification, except that the barangay officials in her area instructed them to go to the Comelec office and get a voter's certification.

As for Carmela (not her real name), 52, she said she was disappointed upon learning that the voter's certification will not be required in claiming the pension, saying she "wasted" five hours of falling in line and waiting for their certification. But she said she is still hopeful that she would still be able to use the document since it is considered a "valid identification" in other transactions.

Meanwhile, other residents said they received information that Senator Christopher "Bong" Go would also provide financial assistance in December, and one of the requirements is the voter's certification from Comelec.

Caballero, herself, explained to them that the information they received is "fake news."

Caballero also said despite informing and clarifying to the senior citizens, "they are not listening."

She said although they deployed police and medical auxiliaries to assist the individuals, they were still surprised to see "young adults" storming their office.

She also said she had to personally assist in the distribution of the voter's certification to cater everyone.

"Allegedly, kaya marami ang dumagsa ngayon (the reason why they surged at our office right now) is because they say it is the last day of the distribution of the voter's certification," Caballero said.

With this, she informed the public that Comelec-Davao City did not set any deadline for its distribution.

She said residents can access and claim their voter's certification anytime during office hours on weekdays, as it is a part of the Comelec's mandate, no matter its purpose.

Duterte, meanwhile, clarified in an issued statement that he never commissioned the enlisting of the city for cash gifts and other giveaways this December.

"We would like to remind everyone to refrain from sharing unverified and false information so as not to cause panic and inconvenience to our fellow Dabawenyos," the vice mayor said in a statement.

He also said he will be "officially: announcing his project or program through the appropriate channels."

Meanwhile, Go, in a forwarded statement, also denied that he required anyone to get a voter's certification from Comelec.

"Tumutulong ako sa mga kababayan ko anumang oras na nangangailangan sila. Walang hinihinging dokumento, basta ikaw ay Pilipino, tutulong ako (I help my fellow countrymen anytime in times of need. I do not ask for any document, as long as you are a Filipino, you have my support)," the senator said.

Go also warned those persons spreading false information using his name to stop or they would face the consequence.