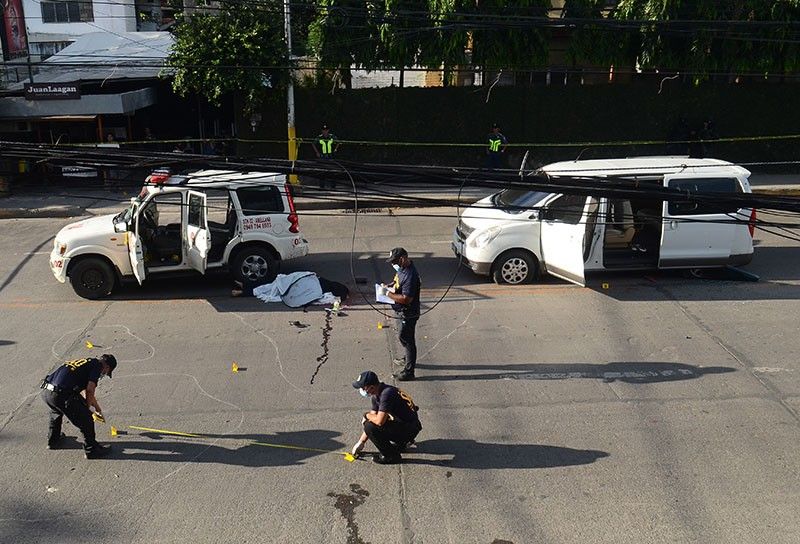 AMBUSH IN BROAD DAYLIGHT. Scene of Crime Operation (Soco) operatives gather evidence where the fatal ambush of Clarin, Misamis Occidental Mayor David Navarro happened at 2 p.m. Friday, Oct. 25, 2019 on M. Velez St., Cebu City. Four men toting long firearms pulled the mayor out of the Mahindra police car he was in and shot him point blank. Wearing a bulletproof vest, Navarro was seated between the police chief of Clarin town and Navarro’s sister in the row seat behind the driver. Three other persons were injured—the driver of the Starex van that carried friends and relatives of Navarro, a passenger of the van, and Navarro’s sister who was riding with him in the Mahindra. (SunStar Photo/Alan Tangcawan) 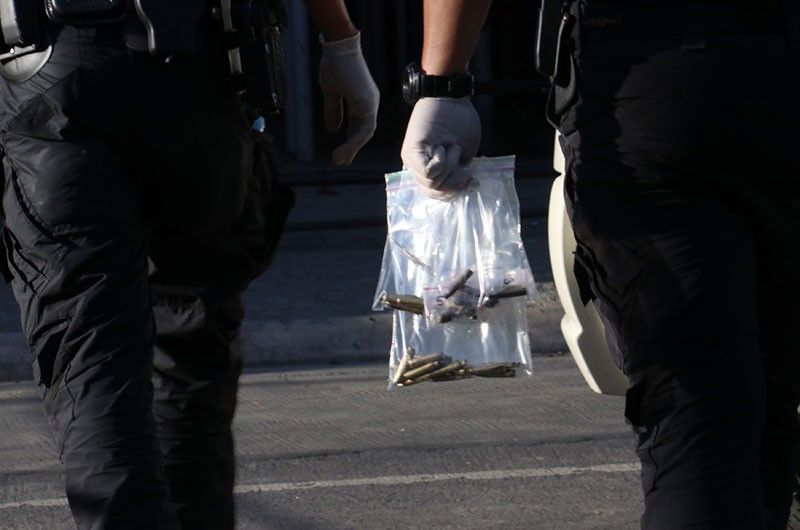 The Soco team gathers the empty shells from bullets fired from the firearms of the hitmen. (SunStar Photo/Amper Campaña)

CLARIN Mayor David Navarro was ambushed dead in Cebu City Friday, Oct. 25, 2019, on his way to seek justice for himself for complaints filed by two massage therapists.

He was no ordinary mayor of a small town in Misamis Occidental in Mindanao.

Navarro was in the March 2019 narco list of President Rodrigo Duterte, with links to the Parojinog drug group based in Ozamiz City.

Clarin Mayor David Navarro and Dante Navarro, the leader of the Alferez Robbery Group based in Ozamiz City, were one and the same person, according to the information fed by the National Capital Region Police Office (NCRPO) to the local police.

The robbery that struck four jewelry shops and a money changer at the J Centre Mall in Mandaue City on Oct. 19 was traced to the Alferez Group.

Mayor Navarro was in Cebu City this week to attend a workshop on Clarin’s development plans that was held in a hotel near Fuente Osmeña.

He had visited the massage and spa parlor inside the hotel Wednesday night, Oct. 23, and had run into an altercation with its manager and a masseur because he could not have a masseuse to attend to him.

When he did not show up at the Abellana police station in Cebu City on Thursday morning to face the complaints filed by the massage therapists, the Police Regional Office (PRO) 7 gave an order to launch a hot pursuit against him.

He had punched a masseur and asked a masseuse to give him a hand job in his hotel room the night before.

He was arrested Thursday afternoon at the domestic terminal of Mactan-Cebu International Airport, about to board a flight to Manila. He was booked for slight physical injuries at the Abellana police station and likewise detained overnight.

On his way to the Cebu City Prosecutor’s Office at about 2 p.m. Friday, Oct. 25, for an inquest or posting of bail, Abellana police station chief P/Maj. Eduard Sanchez had him wear a bulletproof vest supposedly for his protection.

He was made to board a Mahindra police patrol car that was placed in the middle of a three-vehicle convoy. Five policemen, two sisters and a family friend were with him in the Mahindra.

The mayor was in the row seat, sandwiched between the town police chief of Clarin and his sister.

Seated behind him were another sister, a family friend and two more policemen.

Major Sanchez was in the lead car.

Behind the Mahindra was the Starex van that carried a lawyer, the municipal administrator of Clarin and four other passengers plus the driver.

Sanchez’s vehicle had just turned left on M. Velez St. to enter the compound of the Prosecutor’s Office.

Before the Mahindra could turn left, a white van coming from the opposite direction of the convoy blocked the patrol car.

Four men toting long firearms alighted from the van and strafed the Mahindra and the Starex van.

They grabbed Navarro out of the Mahindra and shot him.

Navarro fell to the ground. Grabbing him by his bulletproof vest, one of the attackers shot him pointblank in the head.

The men boarded back the white van and sped. The van bore a plate number marked on a carton board, an eyewitness said. He could not make out the plate number though.

Whether the policemen who were with the mayor did something remains to be answered during an investigation.

They were P/Cpl. Eugenio Catalan, one of the policemen seated behind the mayor in the Mahindra; the driver of the Starex van; and Clarin Municipal Administrator John Baylon, who was in the Starex van.

Abellana police chief Sanchez, sought for comment, said he did not notice that they were being followed.

An investigation is underway, he said.

Princess Madarang, Navarro’s younger sister, said she had assumed that they could go home to Clarin today, Saturday, if they could have posted bail for her brother.

Madarang was in the Starex van.

She said seeking justice for her brother’s death would be futile. The Philippines has become a country without mercy and one cannot expect justice to be rendered anymore, she said.

CCPO deputy director for administration P/Lt. Melbert Esguerra said police investigators are still facing a blank wall on who the perpetrators are. (MPS from AYB, BBT)